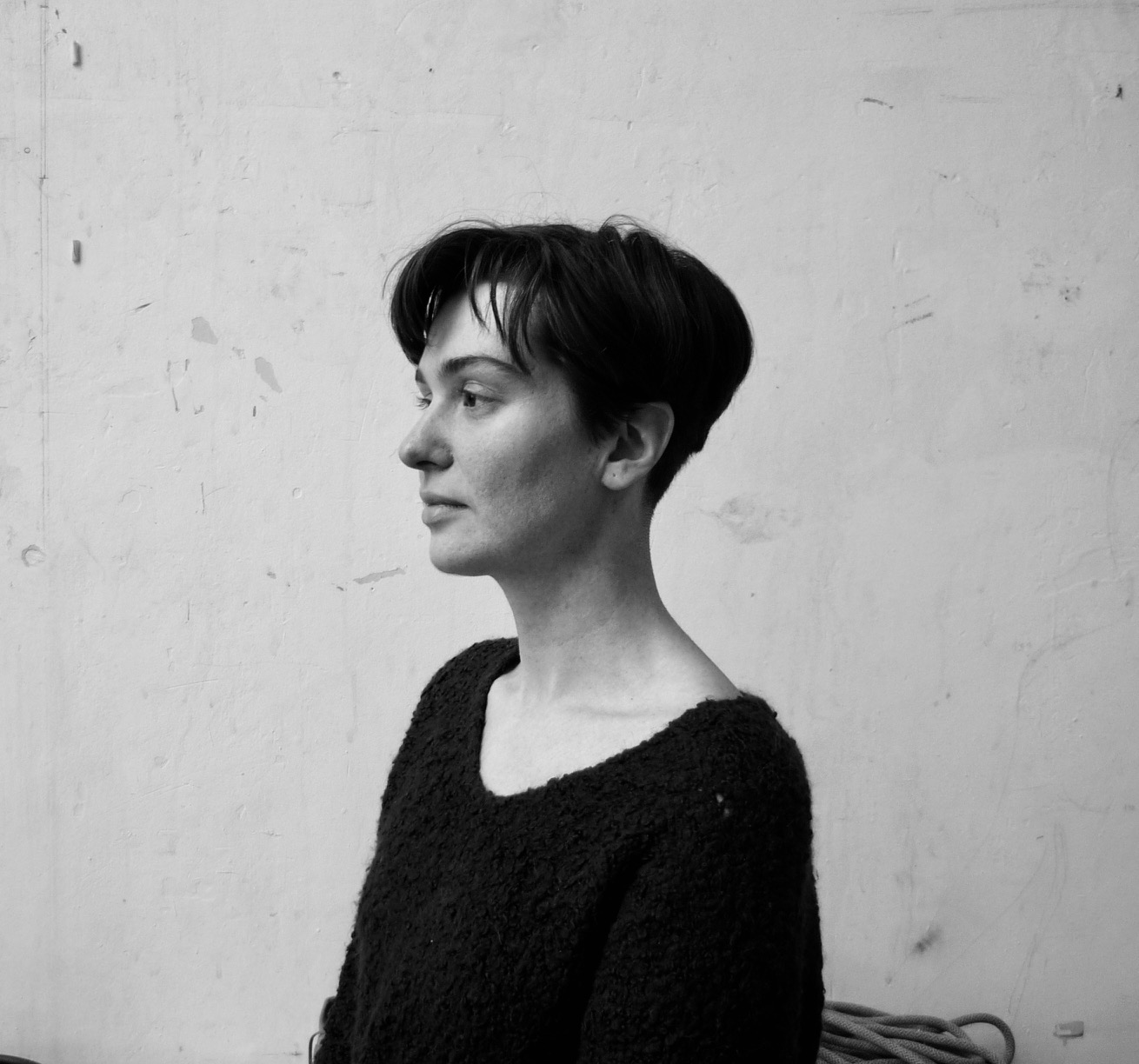 A box – a space for placing and storing things. The appropriation of such an impersonal object. The feeling of safety in this rectangular space. Also the moment when a particular space becomes a possession. The need for hiding, the unwillingness in the face of closeness.

​I deal with space delimited by the size of a box. I work with randomly found pieces of cardboard, which are not only a work material but for the most part an object of interest. Reliefs and three-dimensional objects are based on the particular sizes of the cardboard pieces. They are created partly by casting and partly by additional molding. Many 20th century artists deal with the theme of a box in sculpting. Monique Lacey, for example, explores the tension between construction and destruction in her objects. More conceptual approaches could be found in the works of Isa Genzken and, last but not least, Rachel Whiteread.

Generally, I deem a box a symbol of space appropriation. A box – an object also created, exact as opposed to the organic world. I reflect on my experience with moving around in an environment where rectangular spaces for living are taken for granted. This is, to some extent, linked to my almost obsessive need to always arrange my personal belongings. This work is also about observing different positions of fear dwelling in me and how I work with it. Fear. Fear of moving and at times fear of staying still. Fear of moving among people and communicating with them. To hole up. Inside a box, where the world is reduced to mere “around”. With my hands I examine the need for my own space, its extent, when it is beneficial and when it is limiting. I claim this need for safety and my own physical space mine. I observe it, stop assessing it for a while, then play with it, build it up. It is a bit like an image of an ideal place. Like a dream about a safe place from times long ago. Piles of paper covered in doodles of small houses drawn by a child’s hand that was once mine.

​Boxes go through some major or minor adjusting. Sometimes it is a mere unfolding or folding, sometimes it comes in a form a constructed illusion – a relief of a box from another box, axonometry or they are deconstructed. I am intrigued by the moment when an anonymous object becomes something personal. The size of the box is determinative. Objects are being put together and are predetermined by the size of each piece of the box and therefore they come in many different variants of human scale. I explore their possibilities – closing and opening as well.

​Boxes as spaces for placing things, building, inhabiting. I also use my own wallpaper template created by screen printing. The nature of the material used plays a significant role here – cardboard, which is a cheap waste material designed for single use. Its accessibility almost encourages me to play like children play when they make tiny makeshift houses, little dwellings of sorts. My work process is to some extent similar to such children’s games. The outcome material is very often cement. With its permanent character it helps me stabilize my ideas as part of a particular phase of “building”. I, of course, also combine it with more delicate materials such as plaster or paper.

​In the last few years, the motif of occupying oneself with the excessive need for security and the illusion that it is possible to reach it by building a shell has become rather predominant in my works. To inhabit certain place is necessary. However, building a home is not the same as dwelling in this world. Building is just one part of that dwelling, in the way expressed by Martin Heidegger – in the sense of lingering in this world. I take a box which I settle in – building. For a while. A never-ending process. “We are only capable of dwellingwhen we have built, will build and preservers in the resolution to build differently.” (Martin Heidegger – Building Dwelling Thinking)

Aneta Juklíčková (1990, CZ) graduated the Atelier of Figurative sculpture in Academy of Arts in Prague (2019). She primarily explores the casually found objects, for example cardboard boxes as symbol of space appropriation. The motives surounded by elements of nature are emphasized in the space and inquire thoughts of its everyday use. With focuse on the moment of anonymous object becoming personal, Juklíčková discovers also materia of plaster, cement or more ephemeral materia as paper. Operating with its spacial possibilities simultaneously with surface, structure and volume. 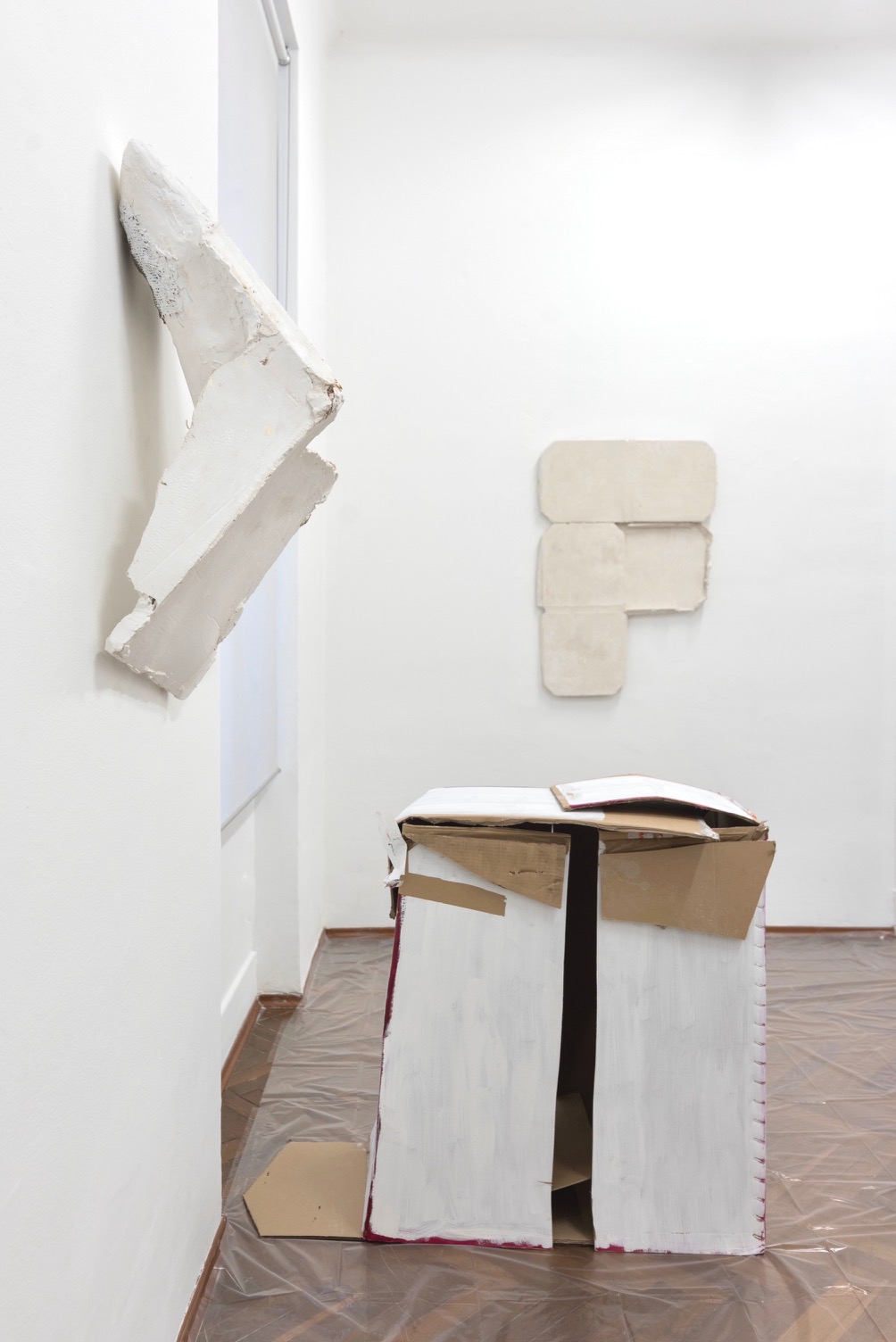 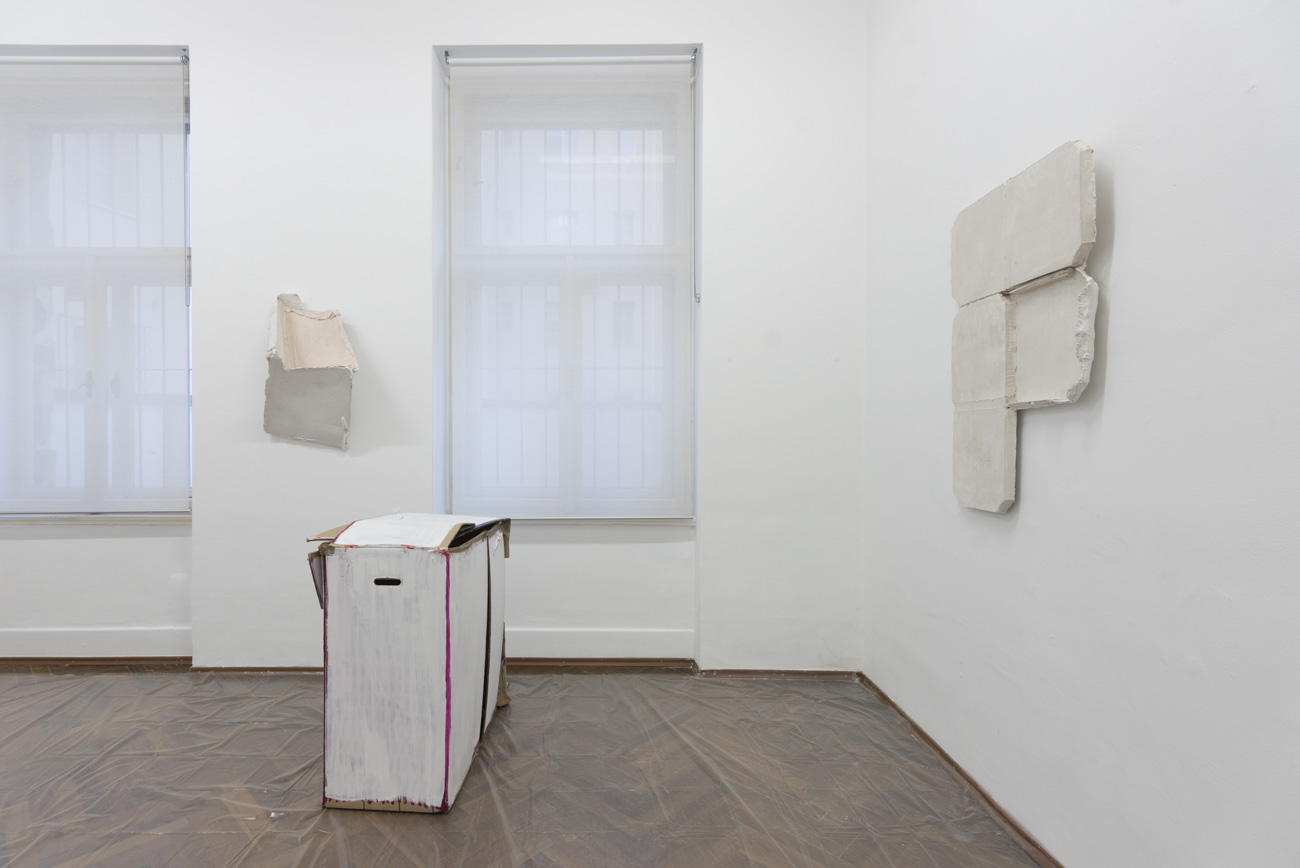 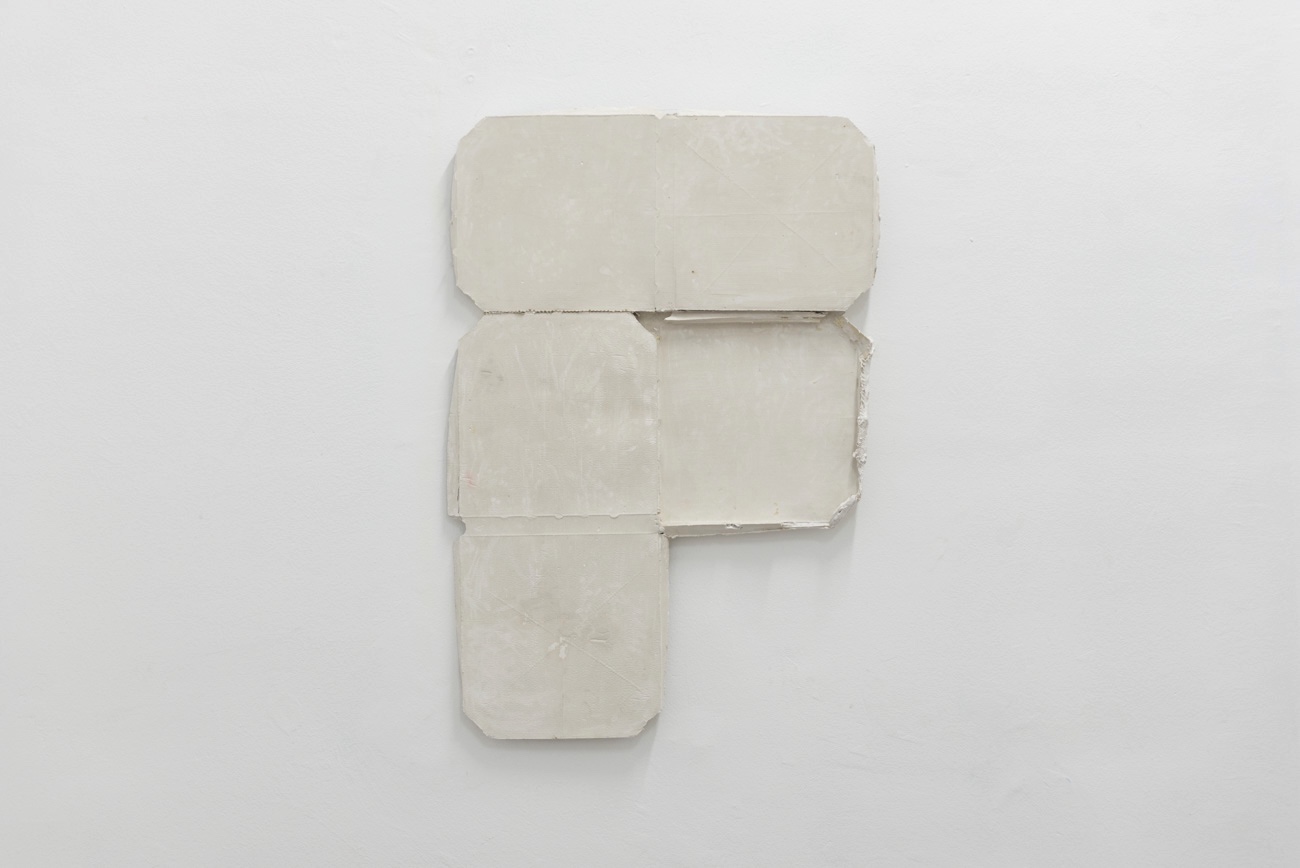 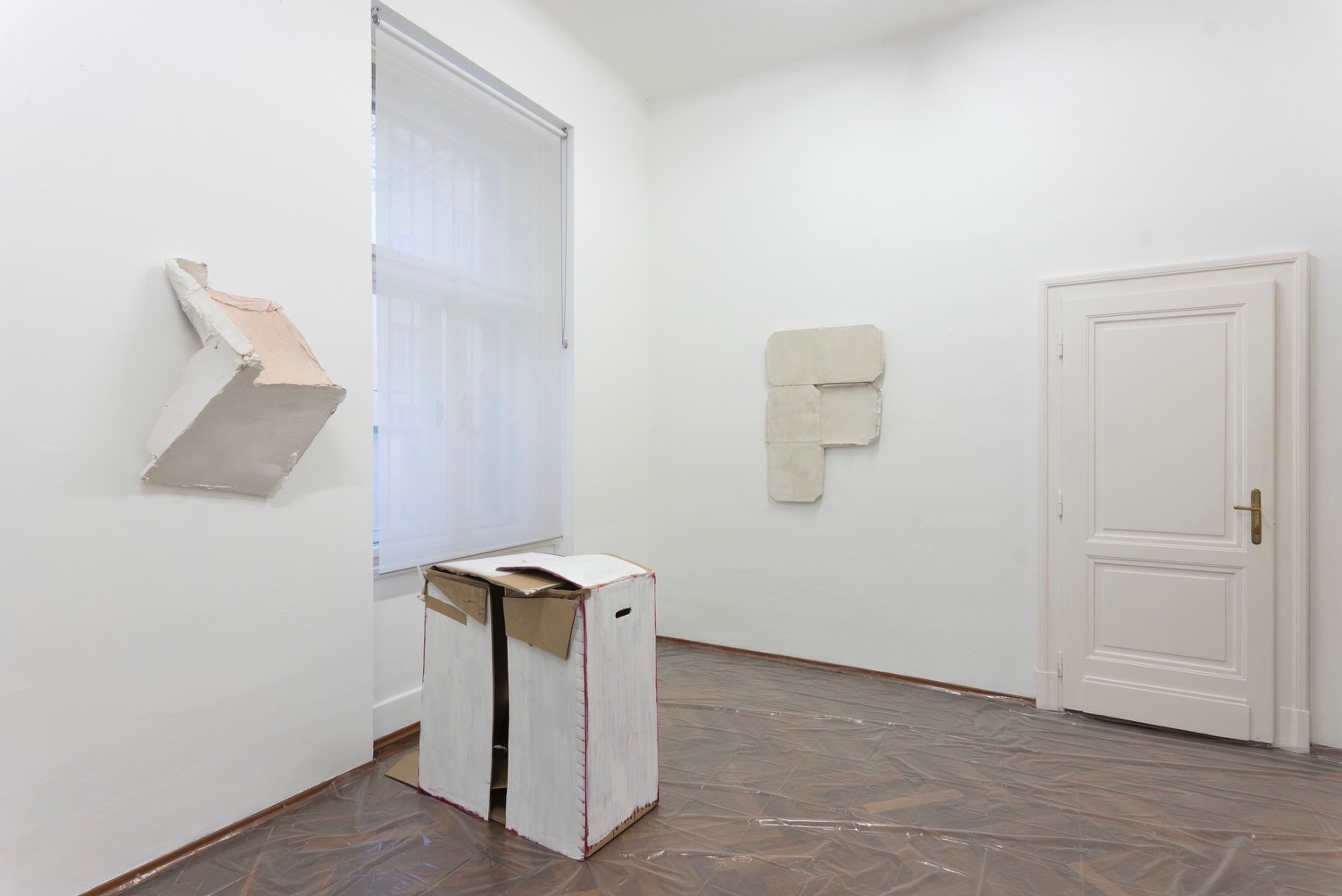 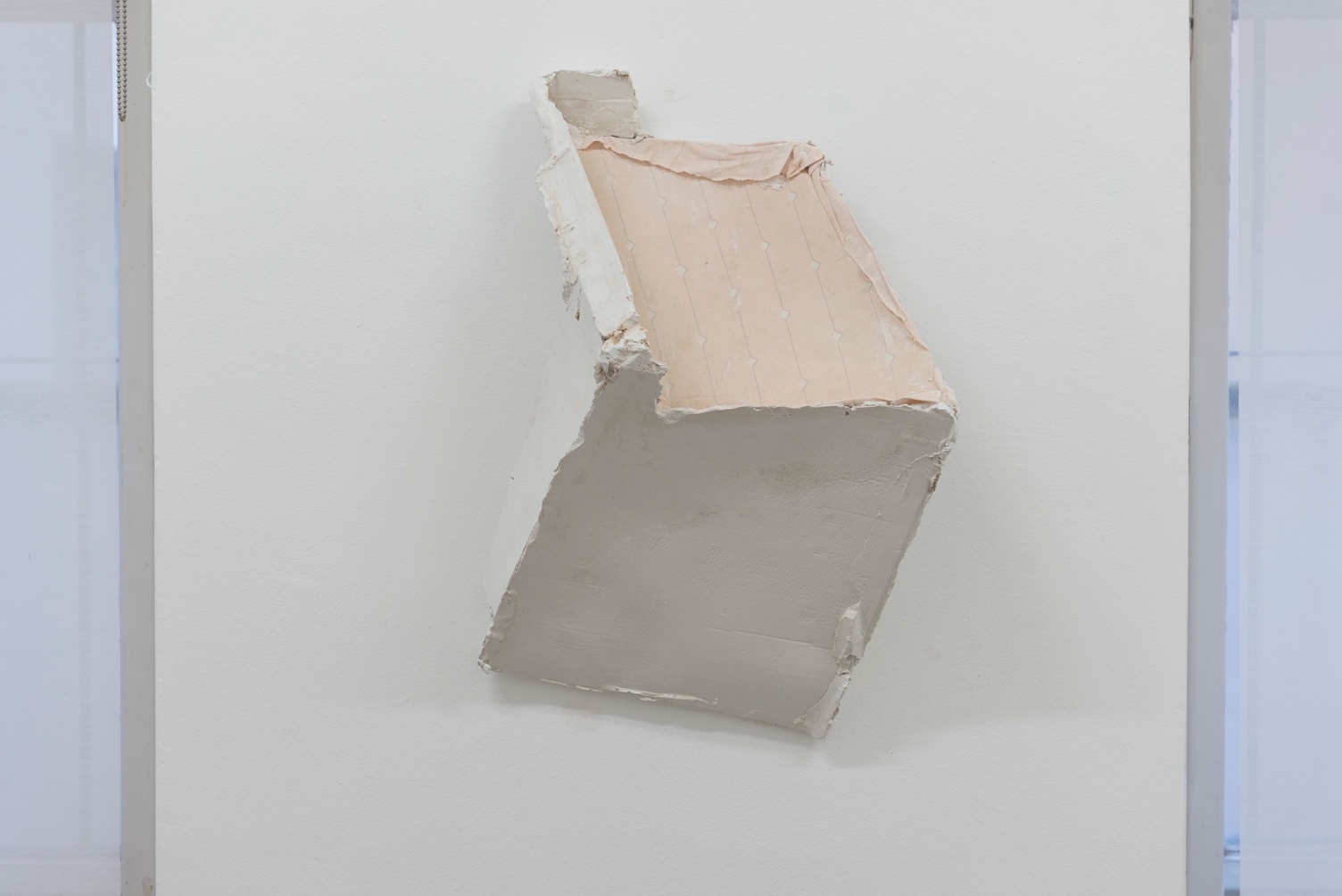 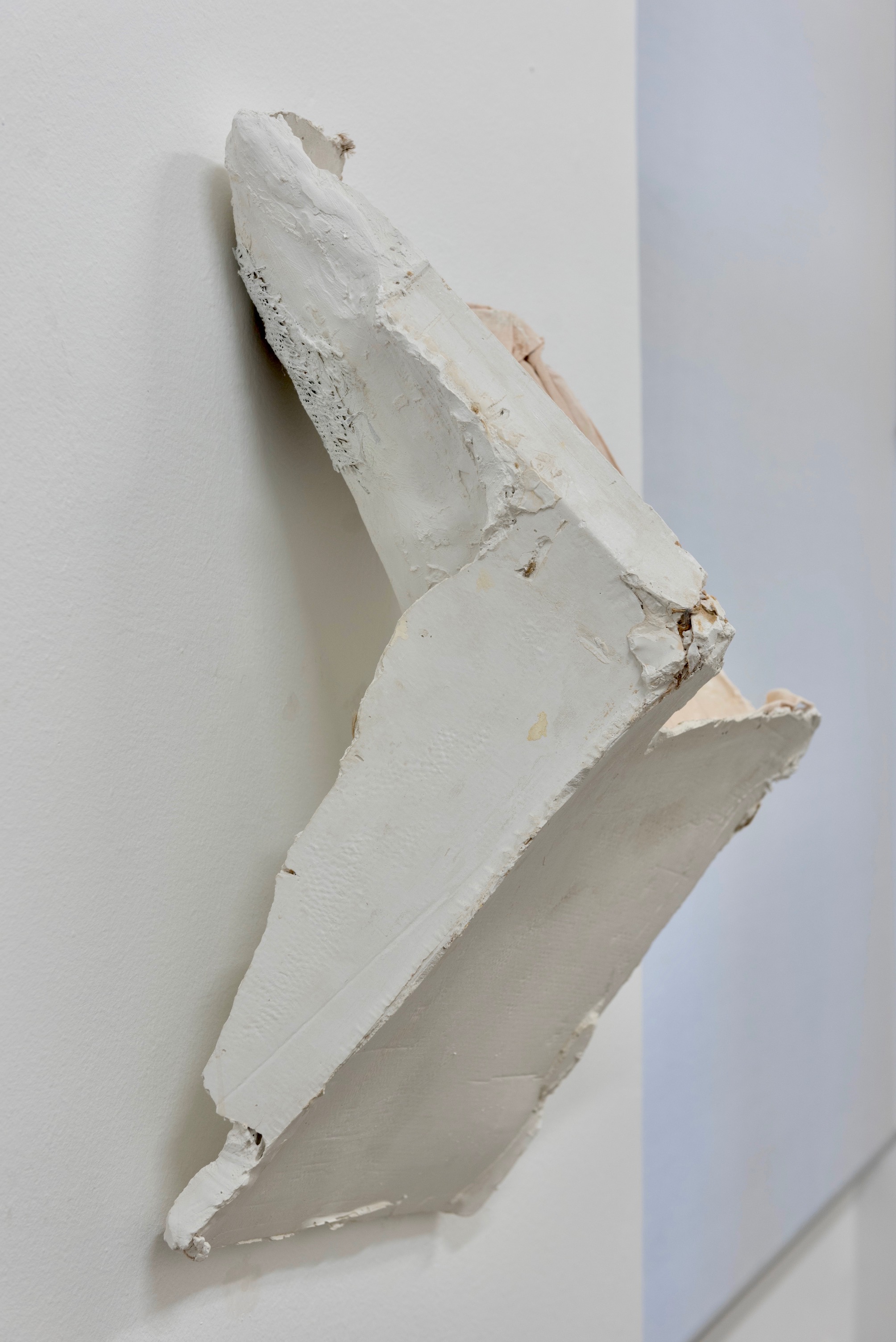 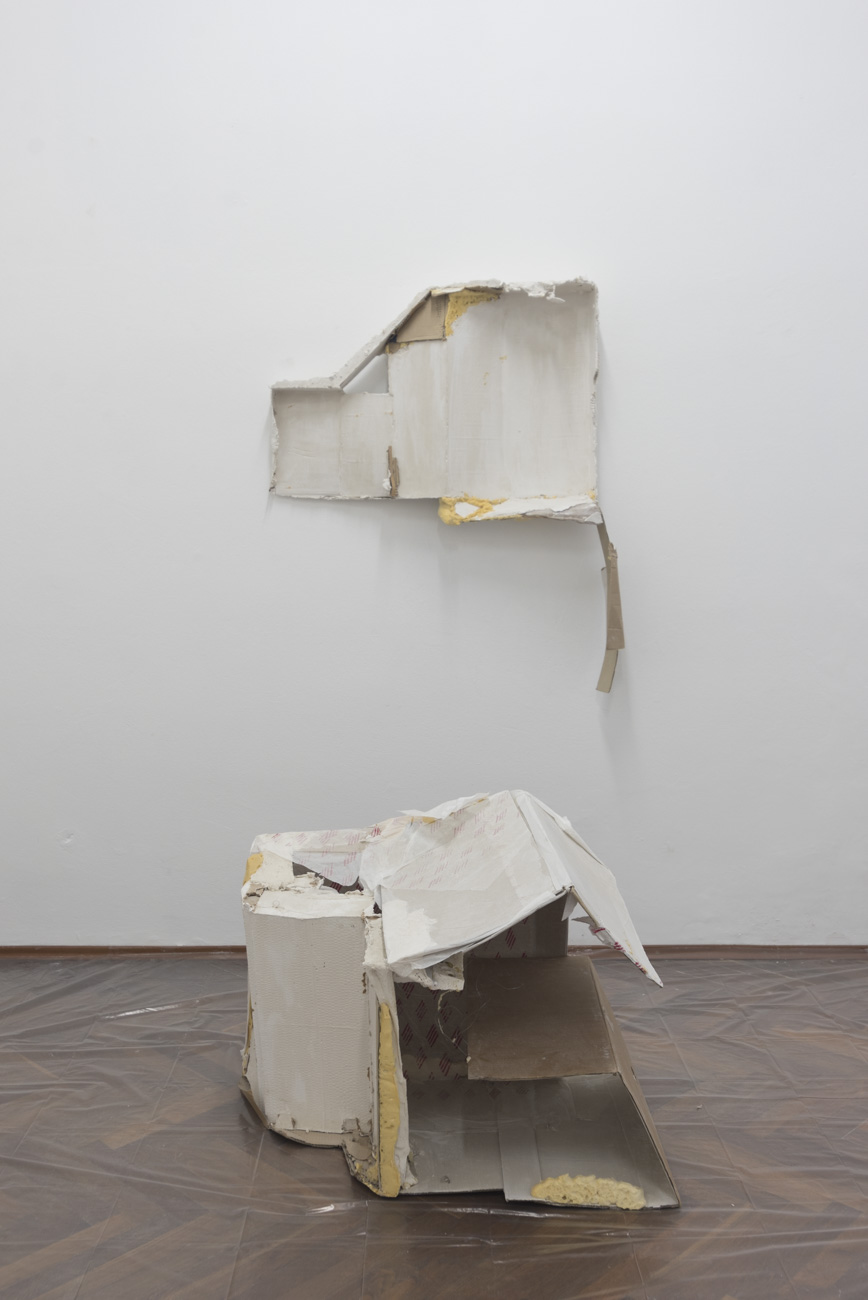 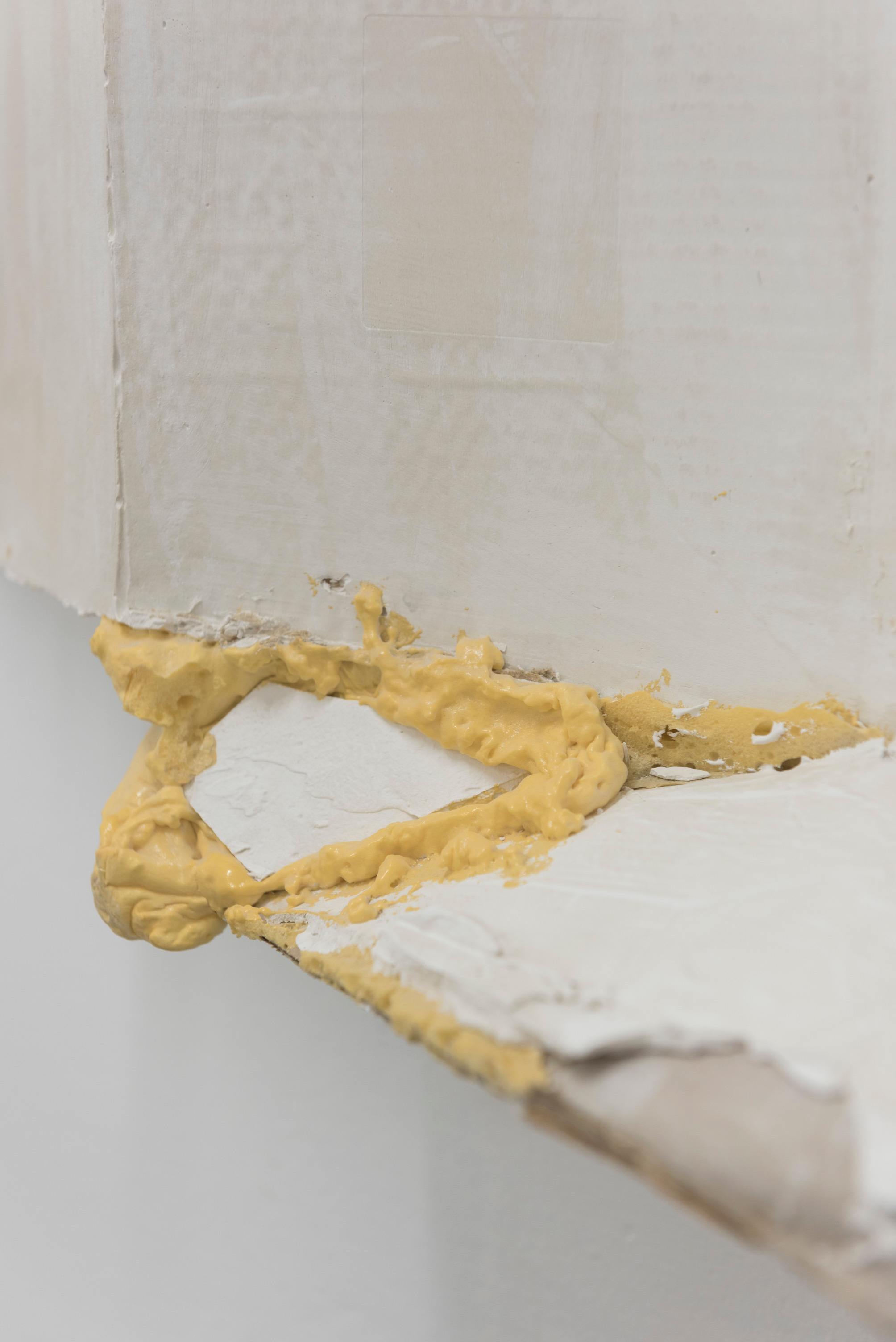 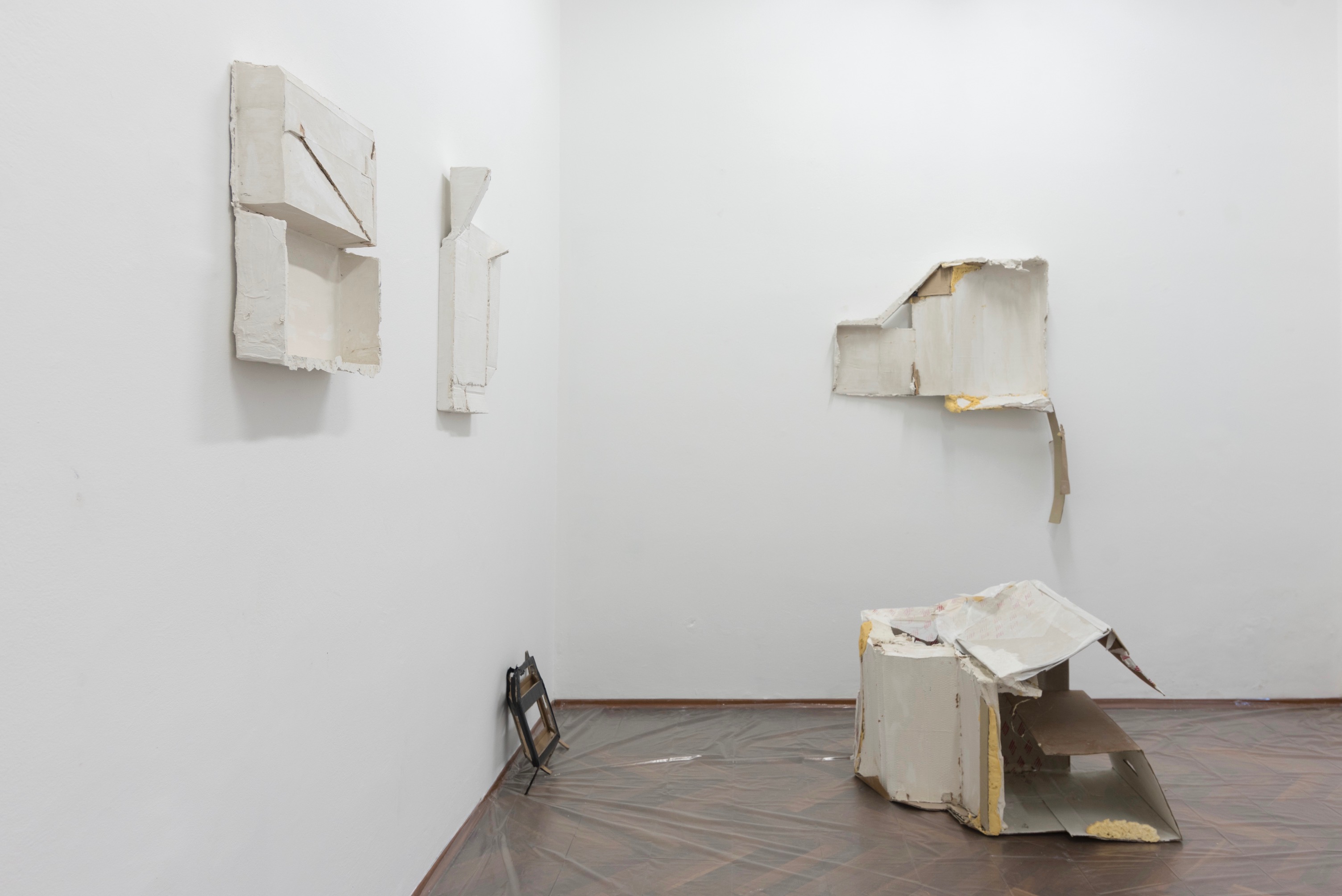 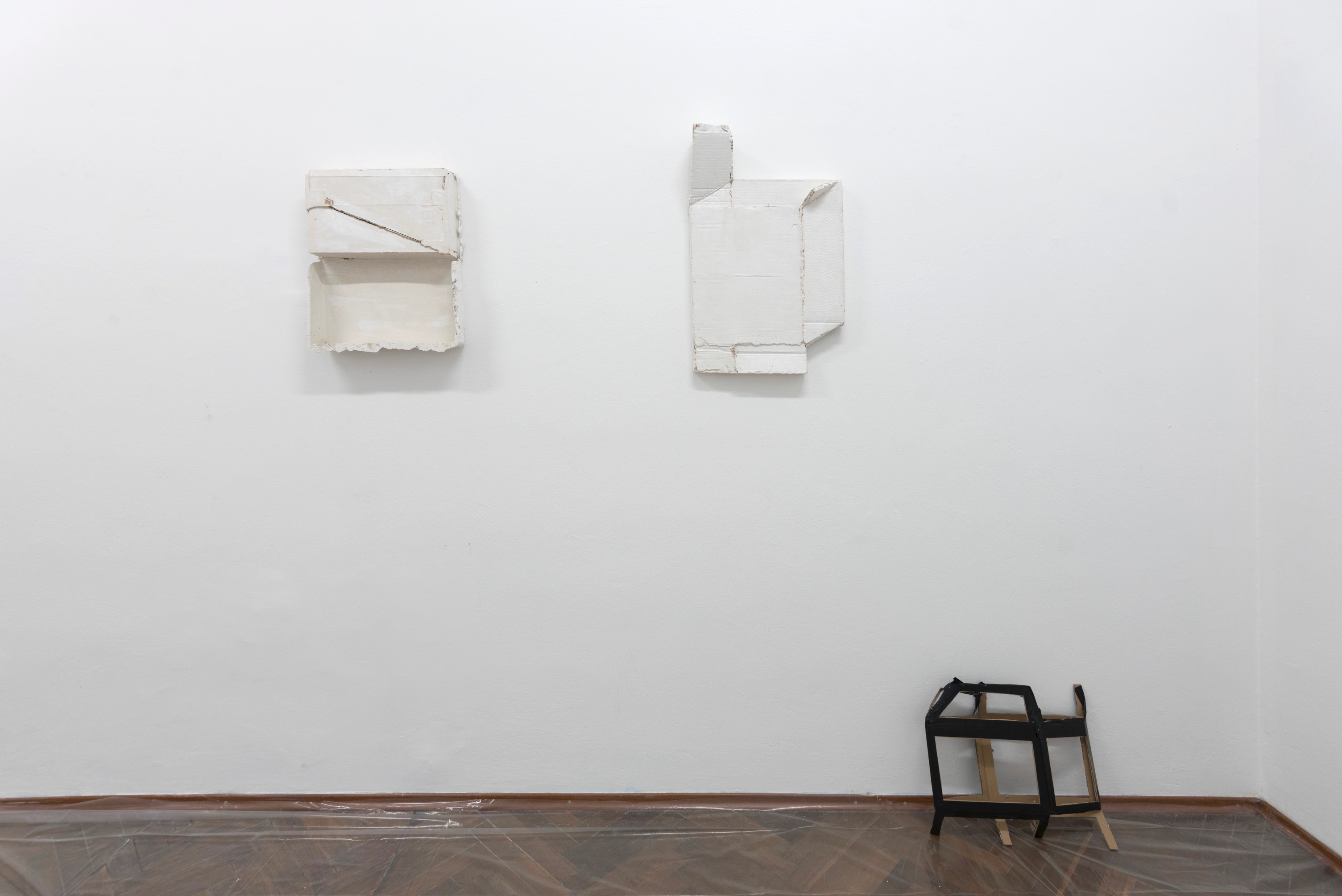 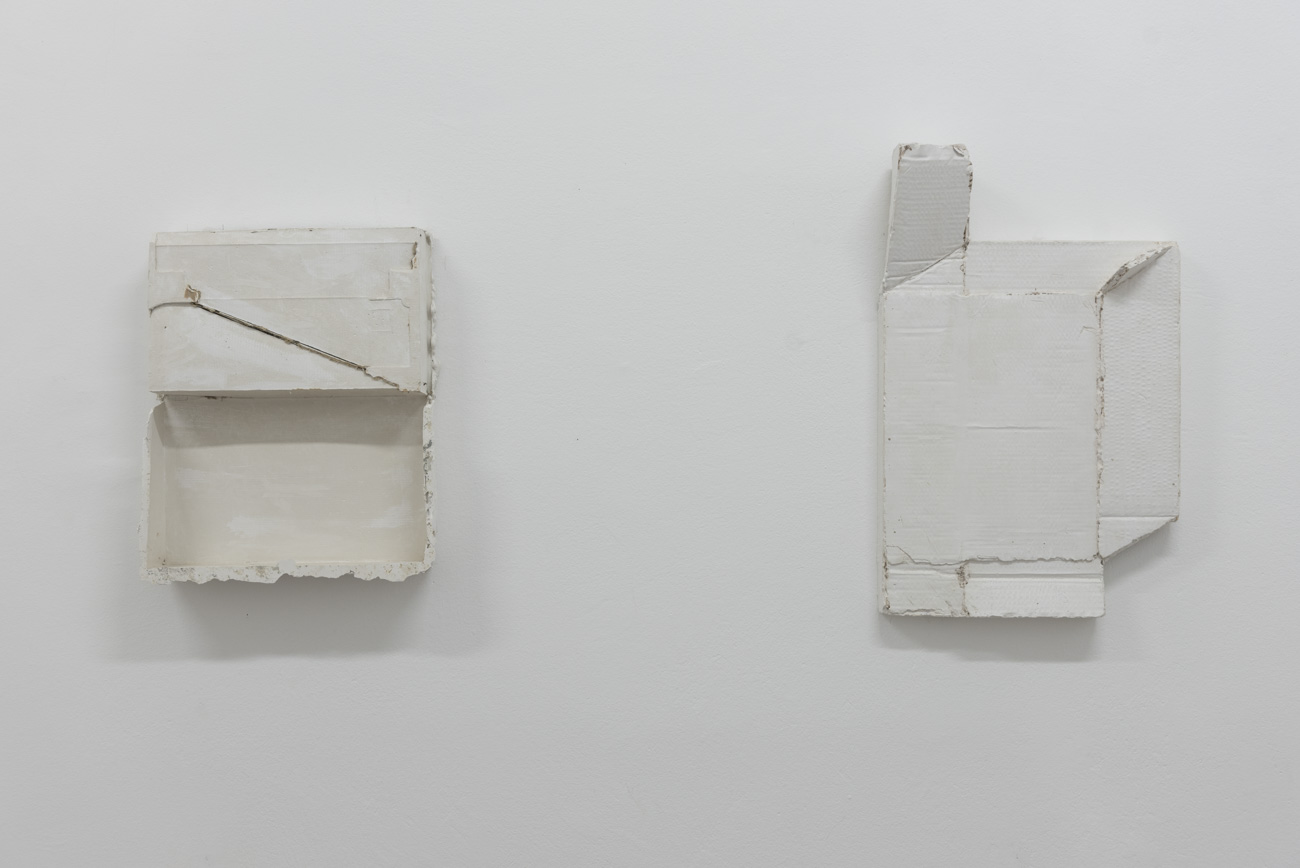 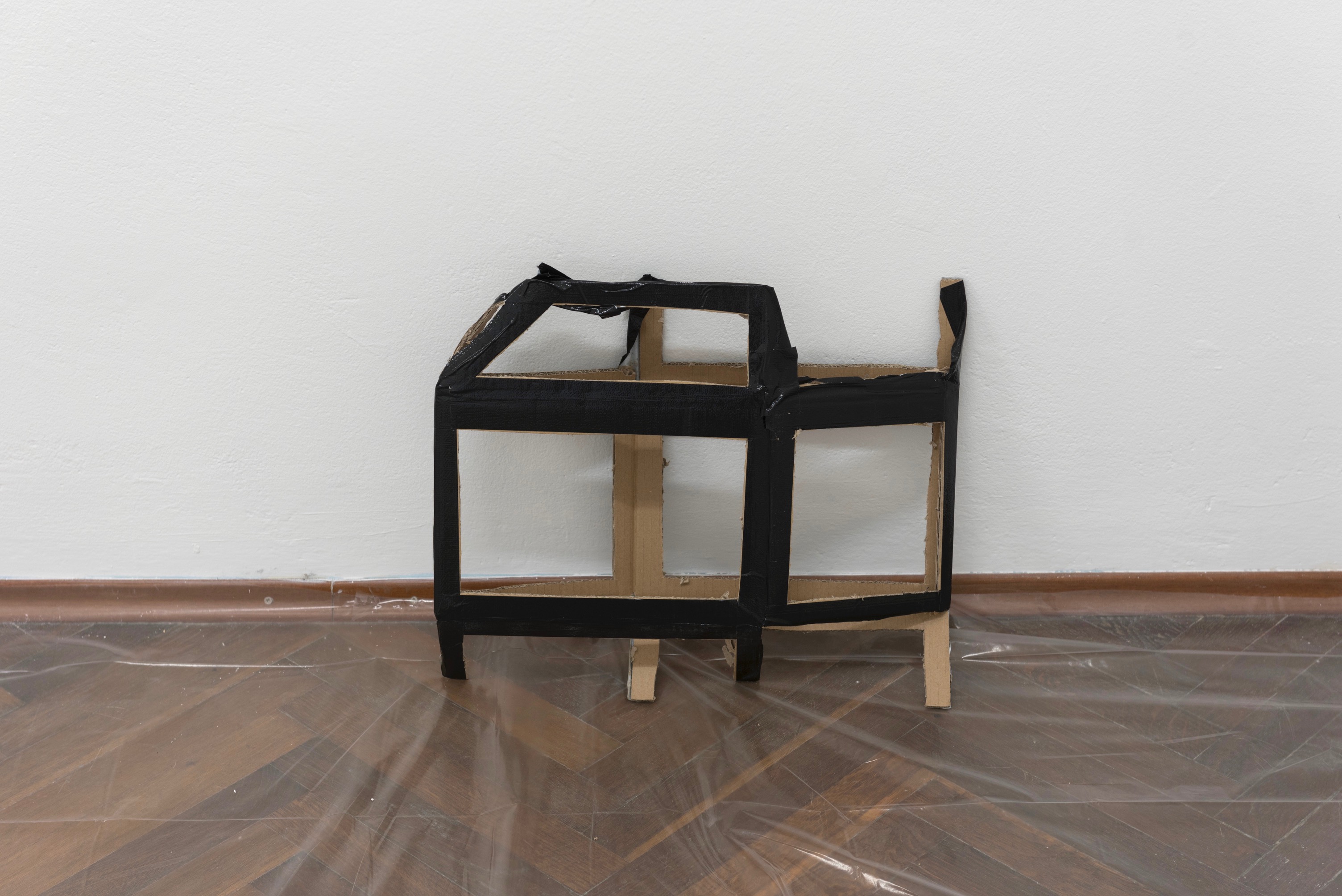