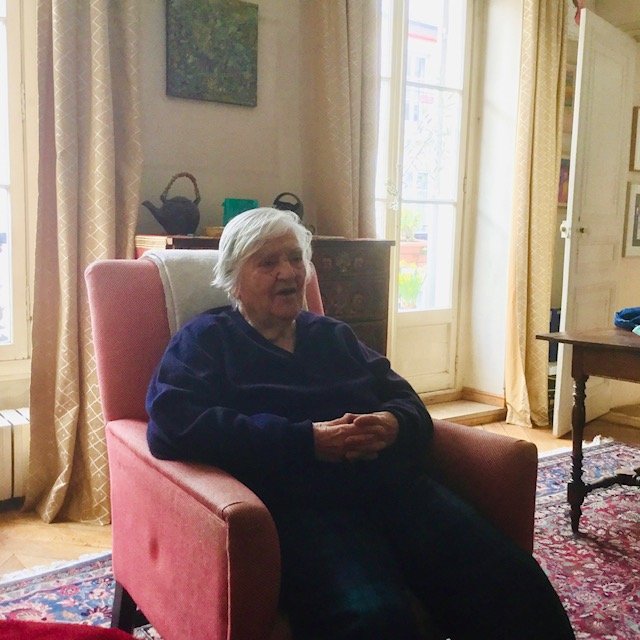 Etel Adnan was born in 1925 in Beirut, Lebanon. Adnan's mother was Greek Orthodox from Smyrna and her father was a Muslim-Turkish high-ranking Ottoman officer born in Damascus, Ottoman Syria. After the Ottoman Empire collapsed and Smyrna was burned during the Occupation of Smyrna, Adnan's parents migrated to Beirut.
Though she grew up speaking Greek and Turkish in a primarily Arabic-speaking society, she was educated at French convent schools and French became the language in which her early work was first written.[8] She also studied English in her youth, and most of her later work has been first written in this language.
At 24, Adnan traveled to Paris where she received a degree in philosophy from the University of Paris.She then traveled to the United States where she continued graduate studies at the University of California, Berkeley and at Harvard University.From 1952 to 1978, she taught philosophy of art at the Dominican University of California in San Rafael.
Adnan returned from the US to Lebanon and worked as a journalist and cultural editor for Al-Safa Newspaper, a French-language newspaper in Beirut. Her tenure at Al-Safa was most notable for her front-page editorials, commenting on the important political issues of the day.

Adnan also works as a painter, her earliest abstract works were created using a palette knife to apply oil paint onto the canvas – often directly from the tube – in firm swipes across the picture's surface. The focus of the compositions often being a red square, she remains interested in the "immediate beauty of colour".
In 2012, a series of the artist's brightly colored abstract paintings were exhibited as a part of documenta 13 in Kassel, Germany.
In the 1960s, she began integrating Arabic calligraphy into her artworks and her books, such as Livres d’Artistes [Artist's Books]. She recalls sitting for hours copying words from an Arabic grammar without trying to understand the meaning of the words. Her art is very much influenced by early hurufiyya artists including; Iraqi artist, Jawad Salim, Palestinian writer and artist, Jabra Ibrahim Jabra and Iraqi painter Shakir Hassan al Said, who rejected Western aesthetics and embraced a new art form which was both modern and yet referenced traditional culture, media and techniques.
Inspired by Japanese leporellos, Adnan also paints landscapes on to foldable screens that can be "extended in space like free-standing drawings".
In 2014, a collection of the artist's paintings and tapestries were exhibited as a part of the Whitney Biennial at the Whitney Museum of American Art.
Adnan's retrospective at Mathaf: Arab Museum of Modern Art in Doha, titled "Etel Adnan In All Her Dimensions" and curated by Hans Ulrich Obrist, featured eleven dimensions of Adnan's practice. It included her early works, her literature, her carpets, and other. The show was launched in March 2014, accompanied by a 580-page catalog of her work published jointly by Mathaf and Skira. The catalog was designed by artist Ala Younis in Arabic and English, and included text contributions by Simone Fattal, Daniel Birnbaum, Kaelen Wilson-Goldie, as well as six interviews with Hans-Ulrich Obrist.
In 2017, Adnan's work was included in "Making Space: Women Artists and Postwar Abstraction," a group exhibition organized by MoMA, which brought together prominent artists including Ruth Asawa, Gertrudes Altschul, Anni Albers, Magdalena Abakanowicz, Lygia Clark, and Lygia Pape, among others.
In 2018, MASS MoCA hosted a retrospective of the artist, titled "A yellow sun A green sun a yellow sun A red sun a blue sun", including a selection of paintings in oil and ink, as well as a reading room of her written works.[17] The exhibition explored how the experience of reading poetry differs from the experience of looking at a painting.
Published in 2018, "Etel Adnan", a biography of the artist written by Kaelen Wilson-Goldie, inquires into the artist's work as a shaman and activist.
In 2020, the Griffin Poetry Prize is awarded to her book Time. 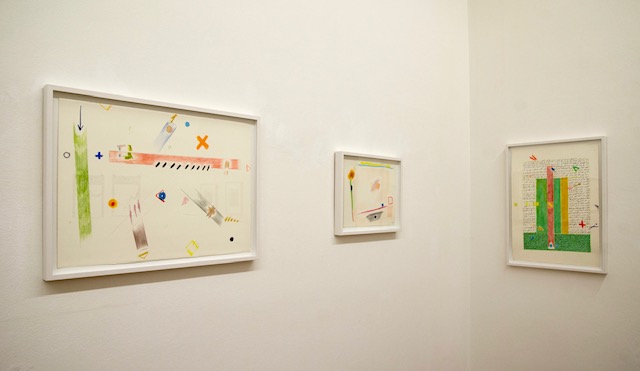 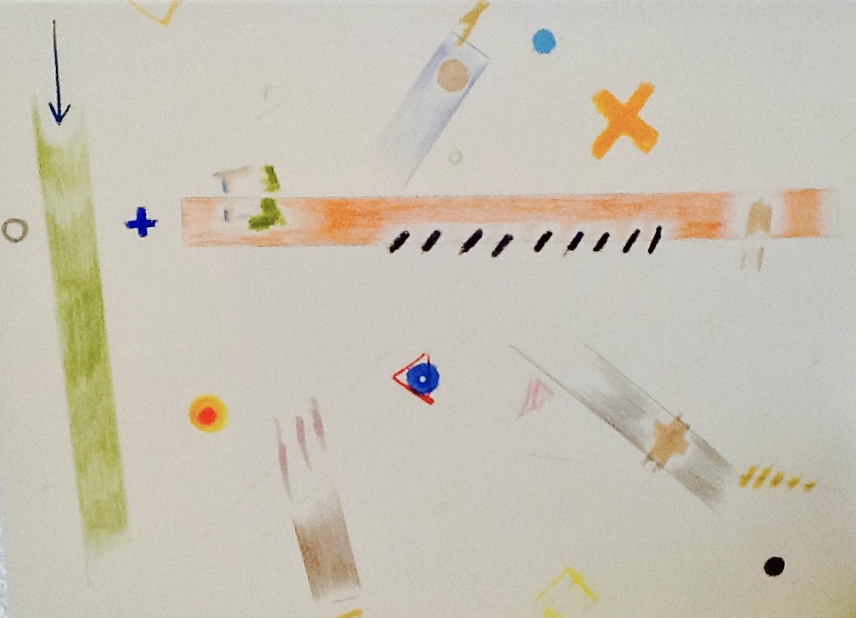 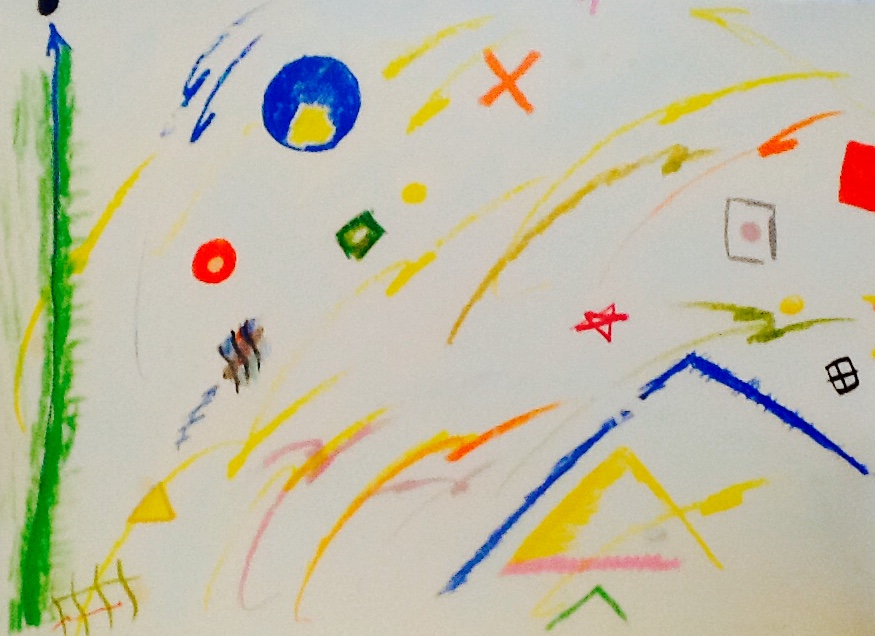 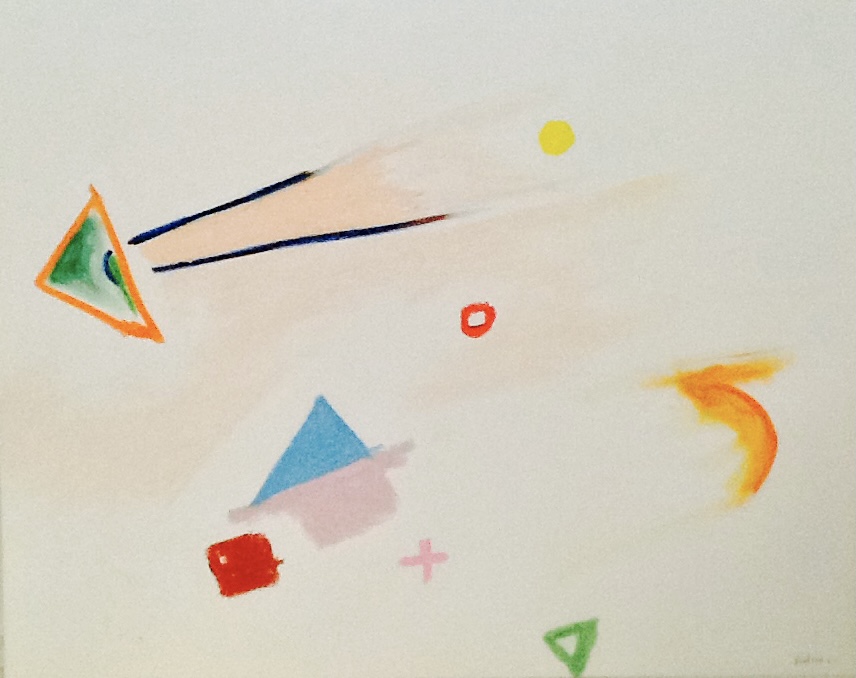 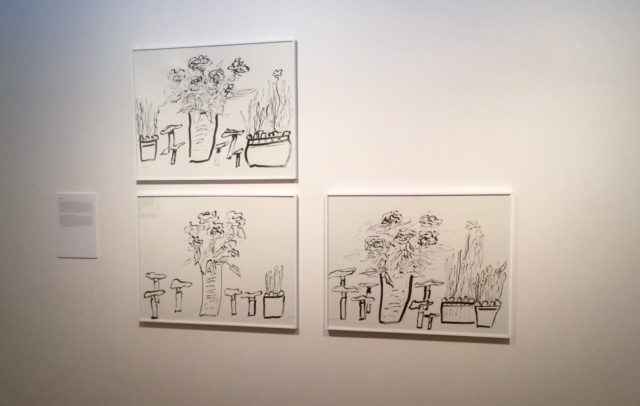 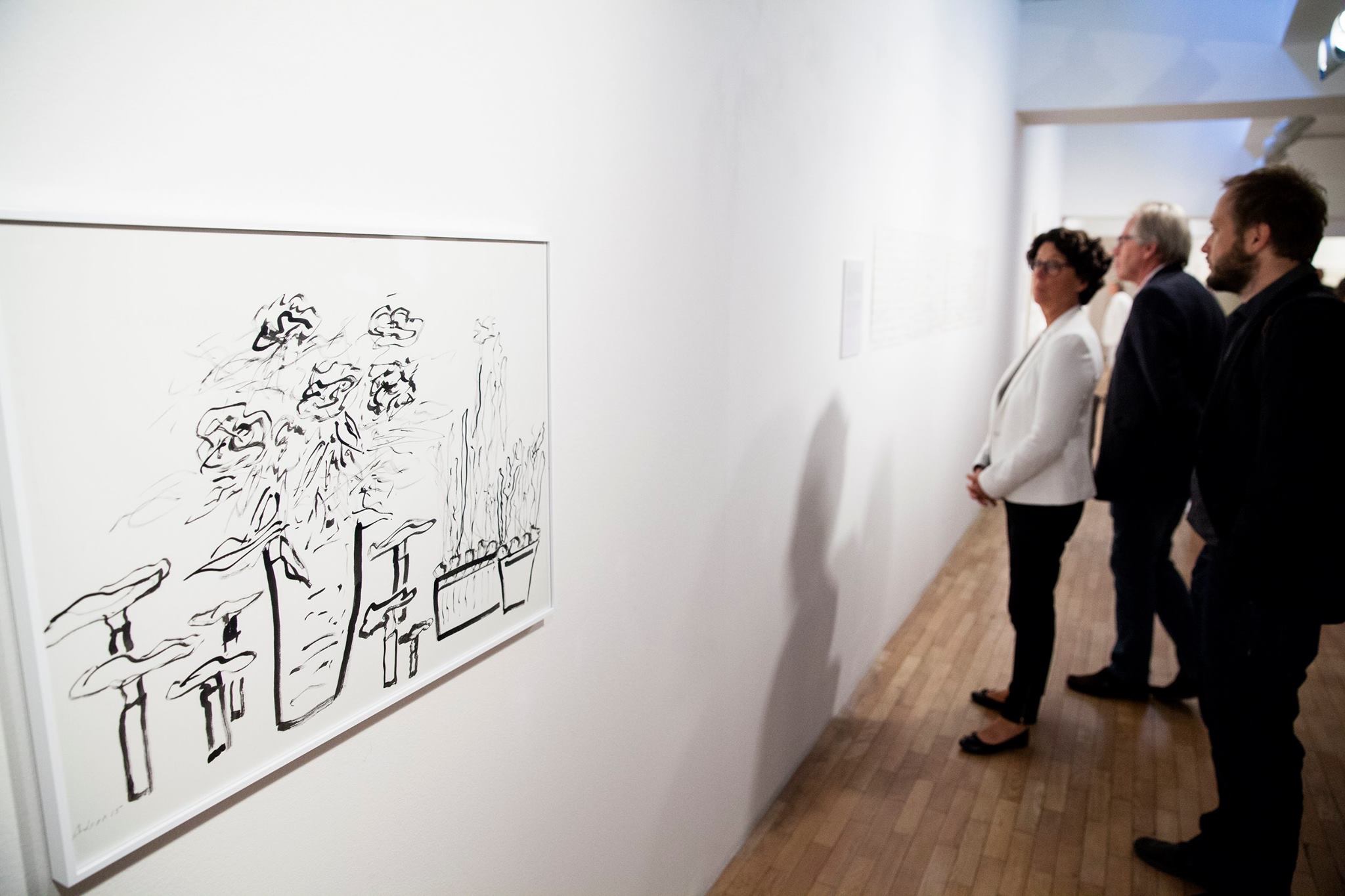 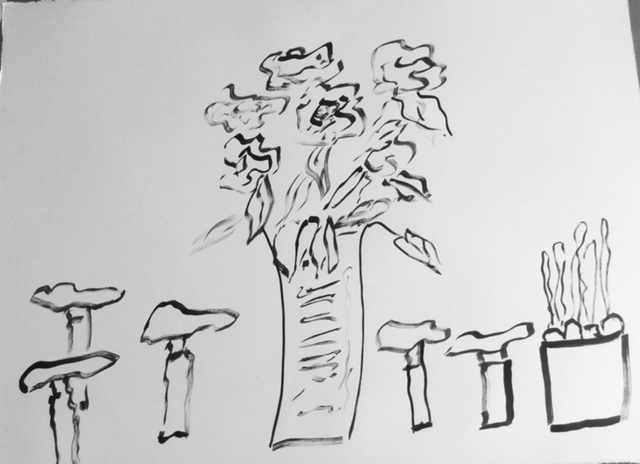 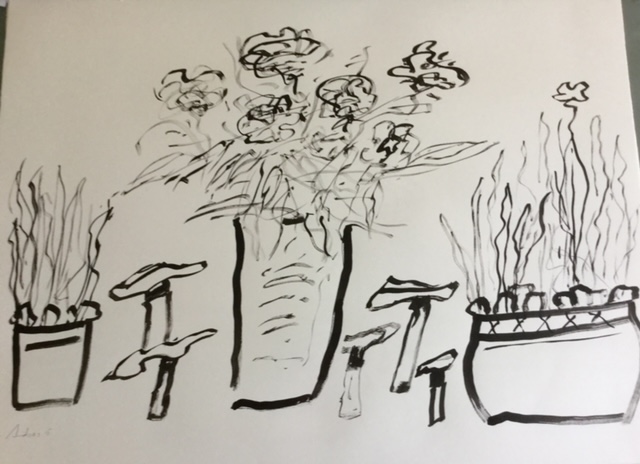 Saisons, 2015
Gouache and pencil
40x30cm
Signed and dated at the bottom 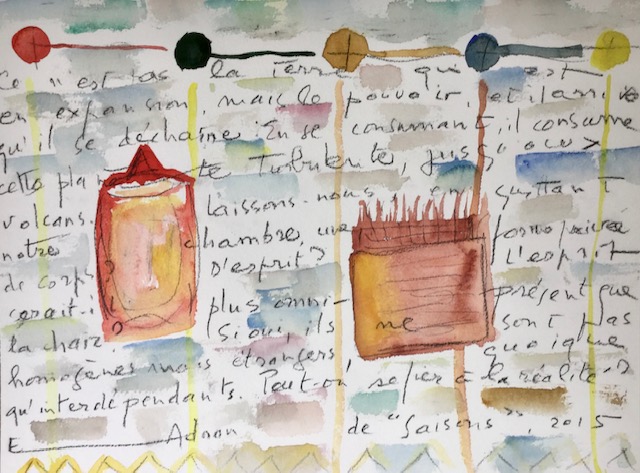 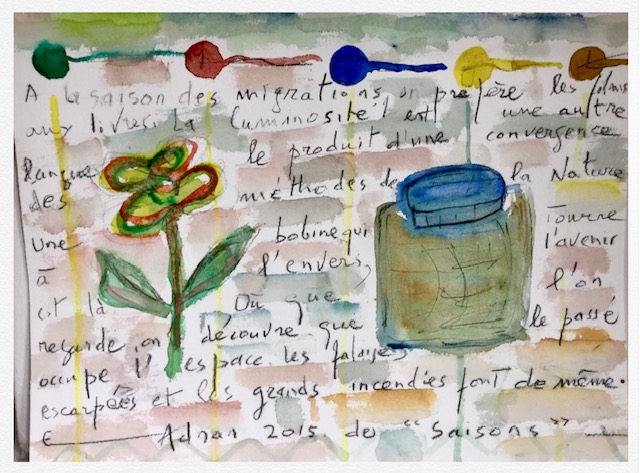 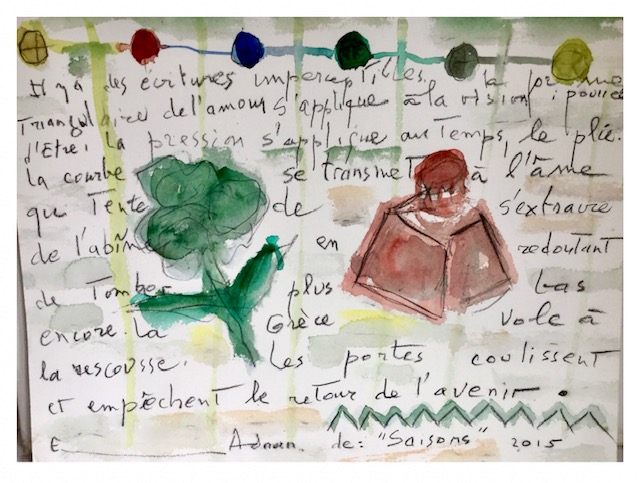 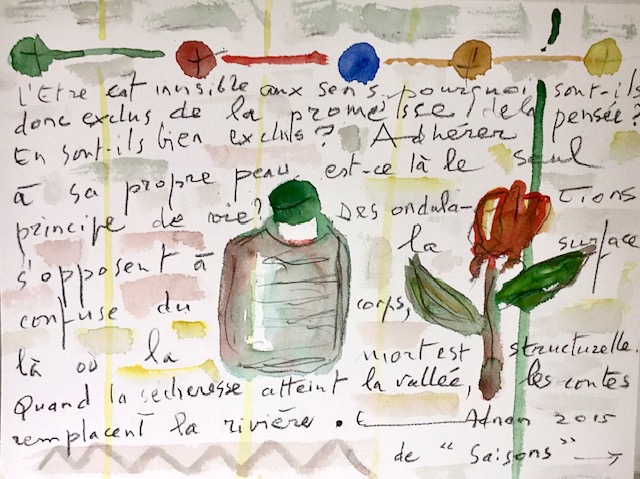 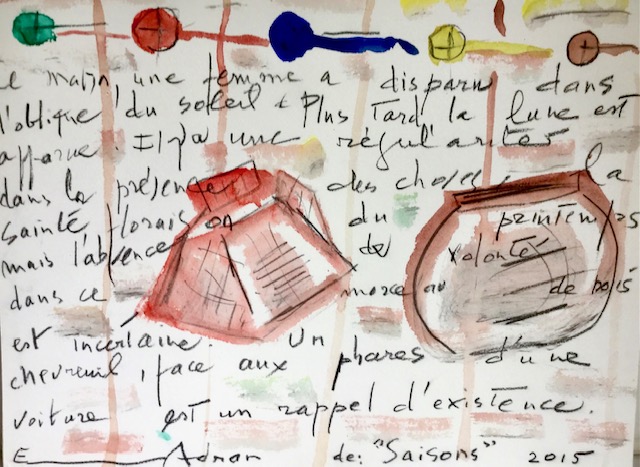 The conversation between Etel Adnan and Oto Hudec organised by Alicia Knock and Nadine Gandy at the Centre Pompidou for the exhibition Museum on/off  in 2015. 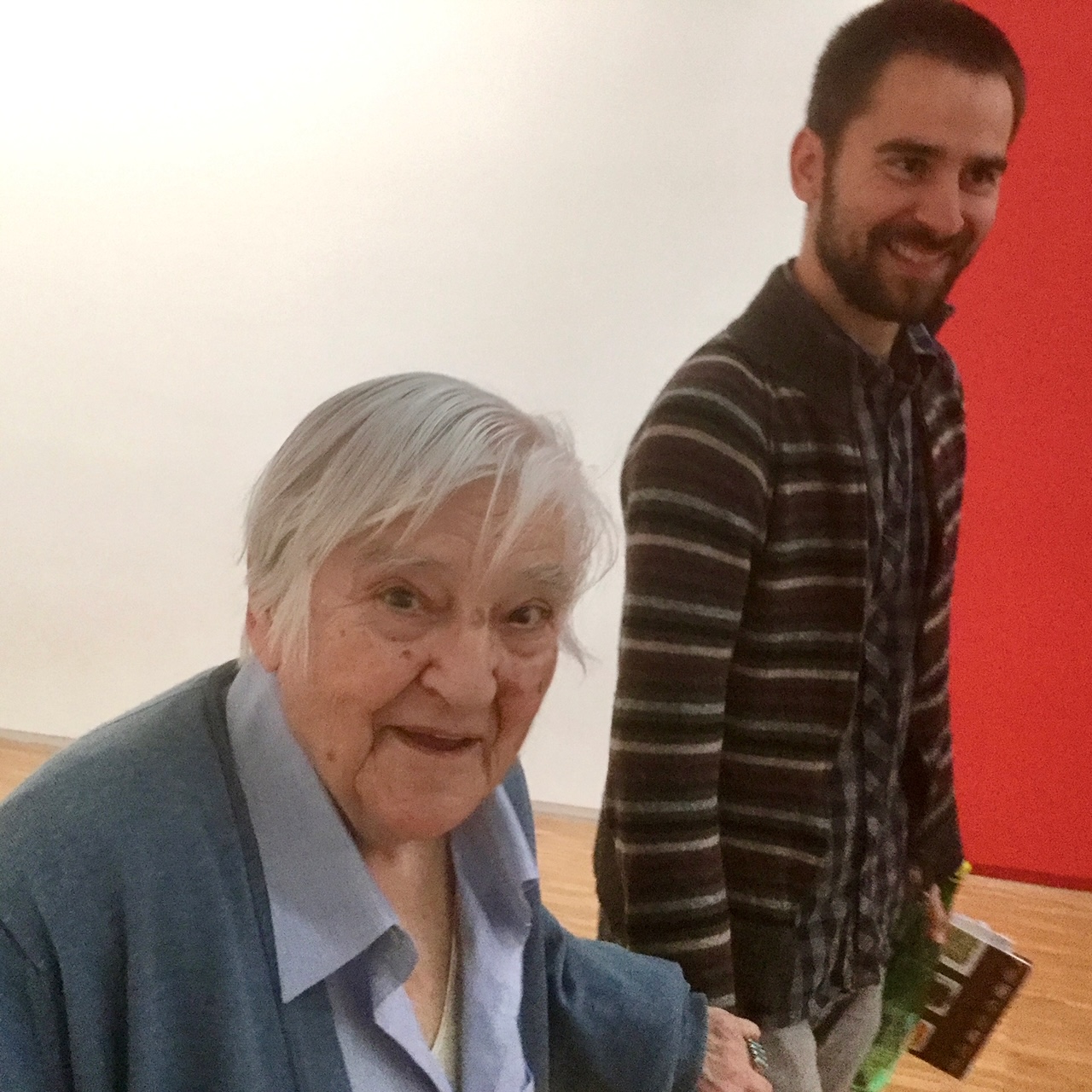 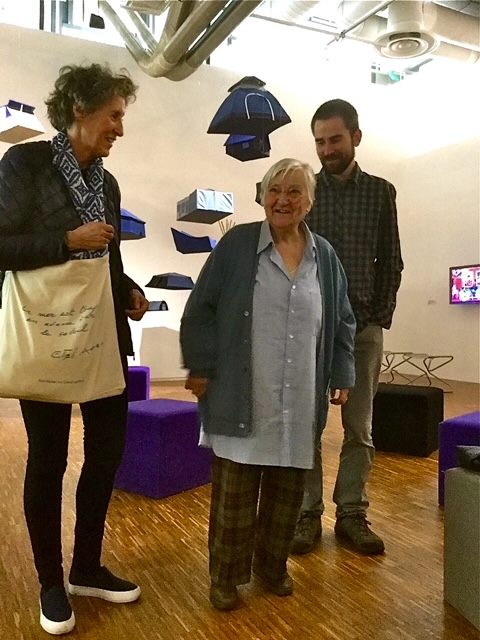 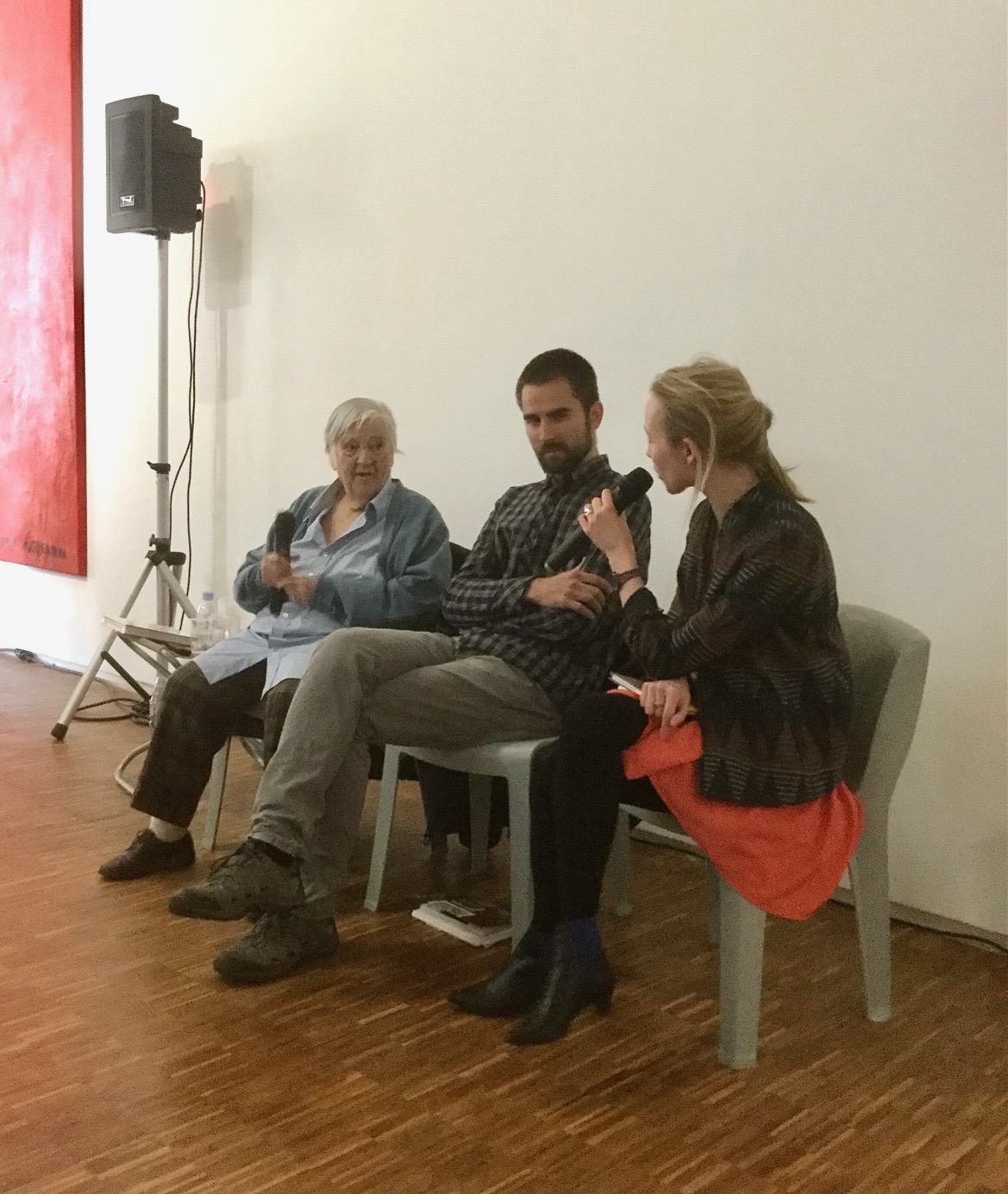 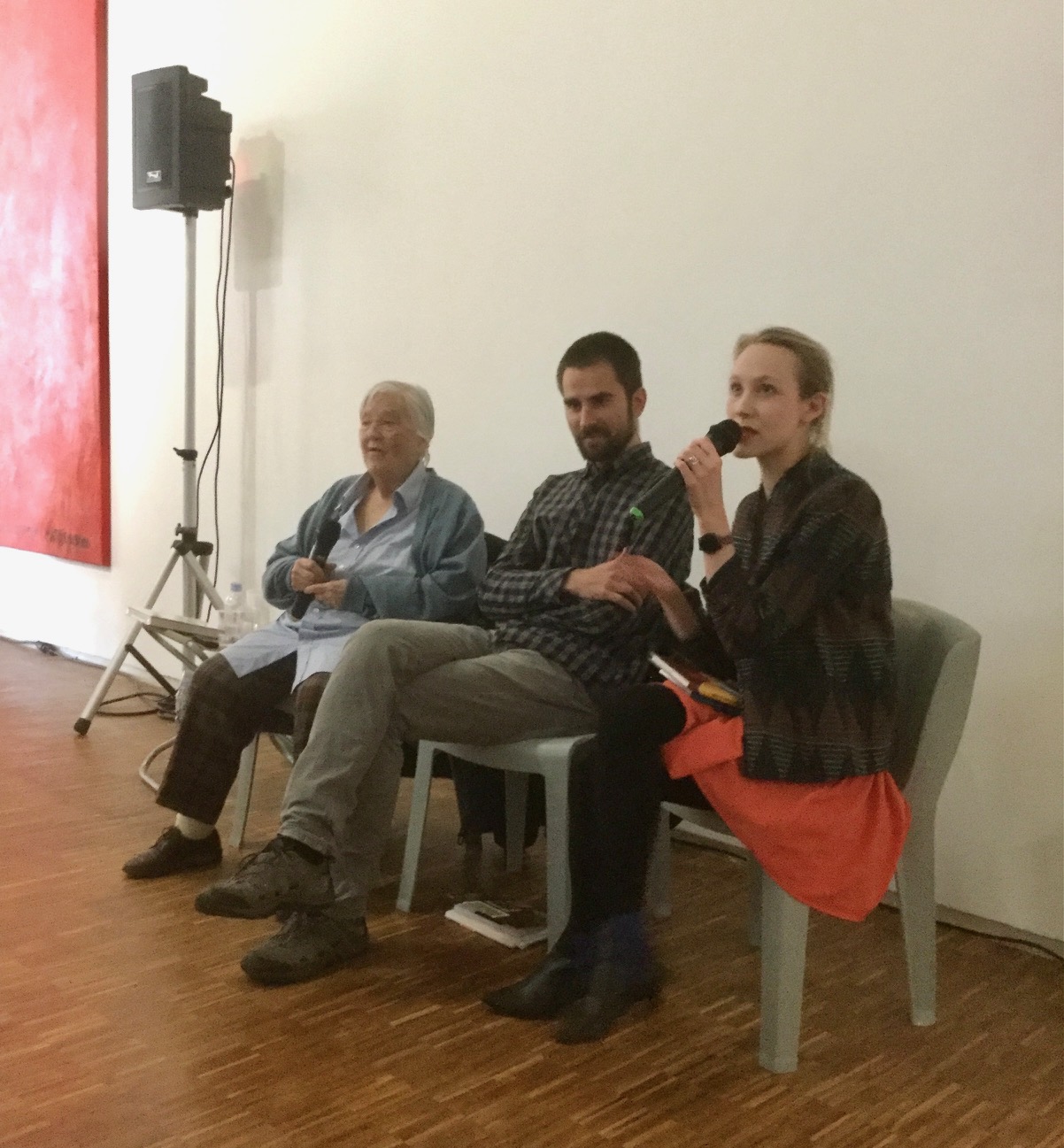 Etel Adnan
Set of 10 drawings, 2018
Ink on paper, phrases from the book Night published in 2017
Courtesy of the artist and Gandy Gallery 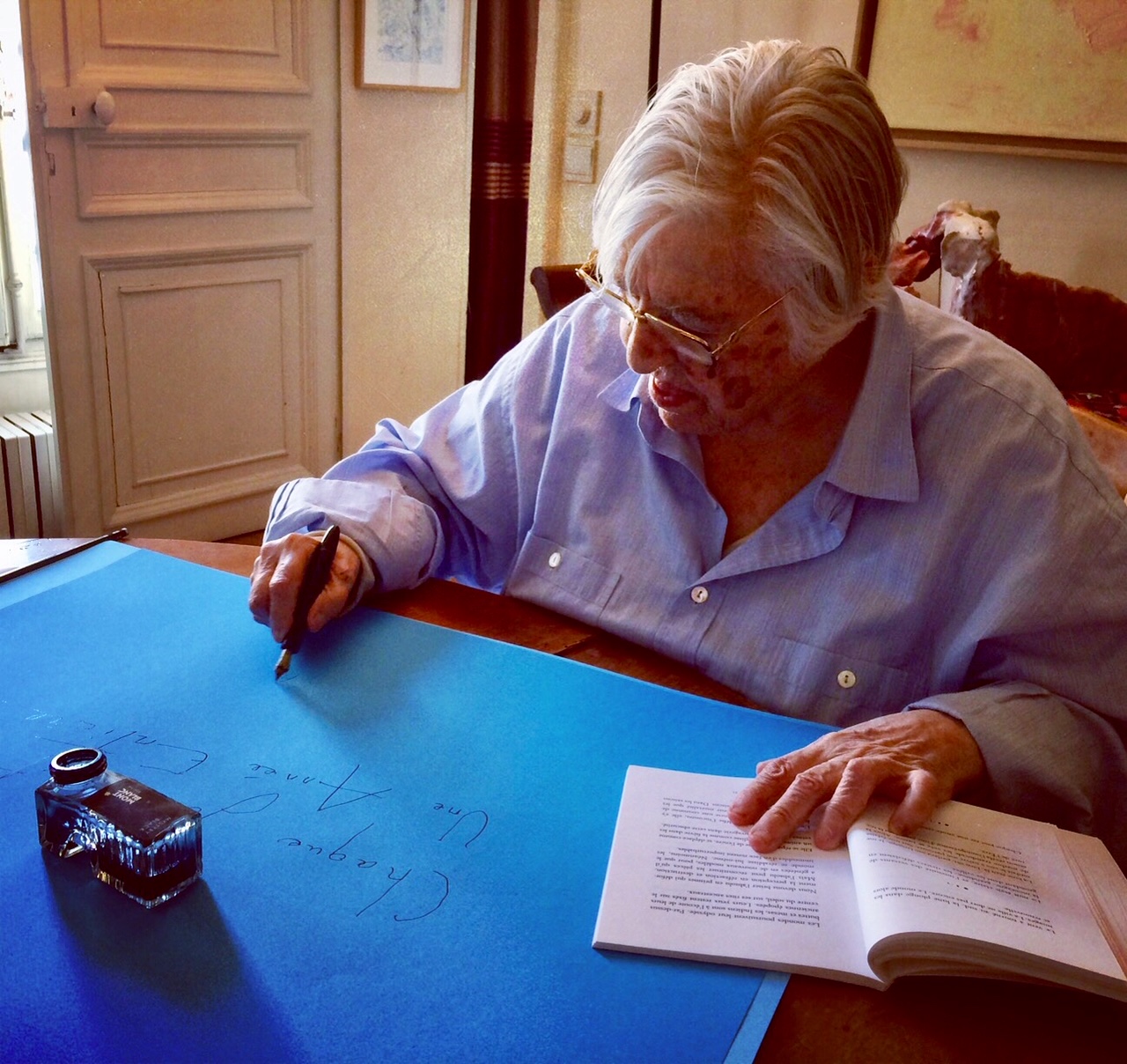 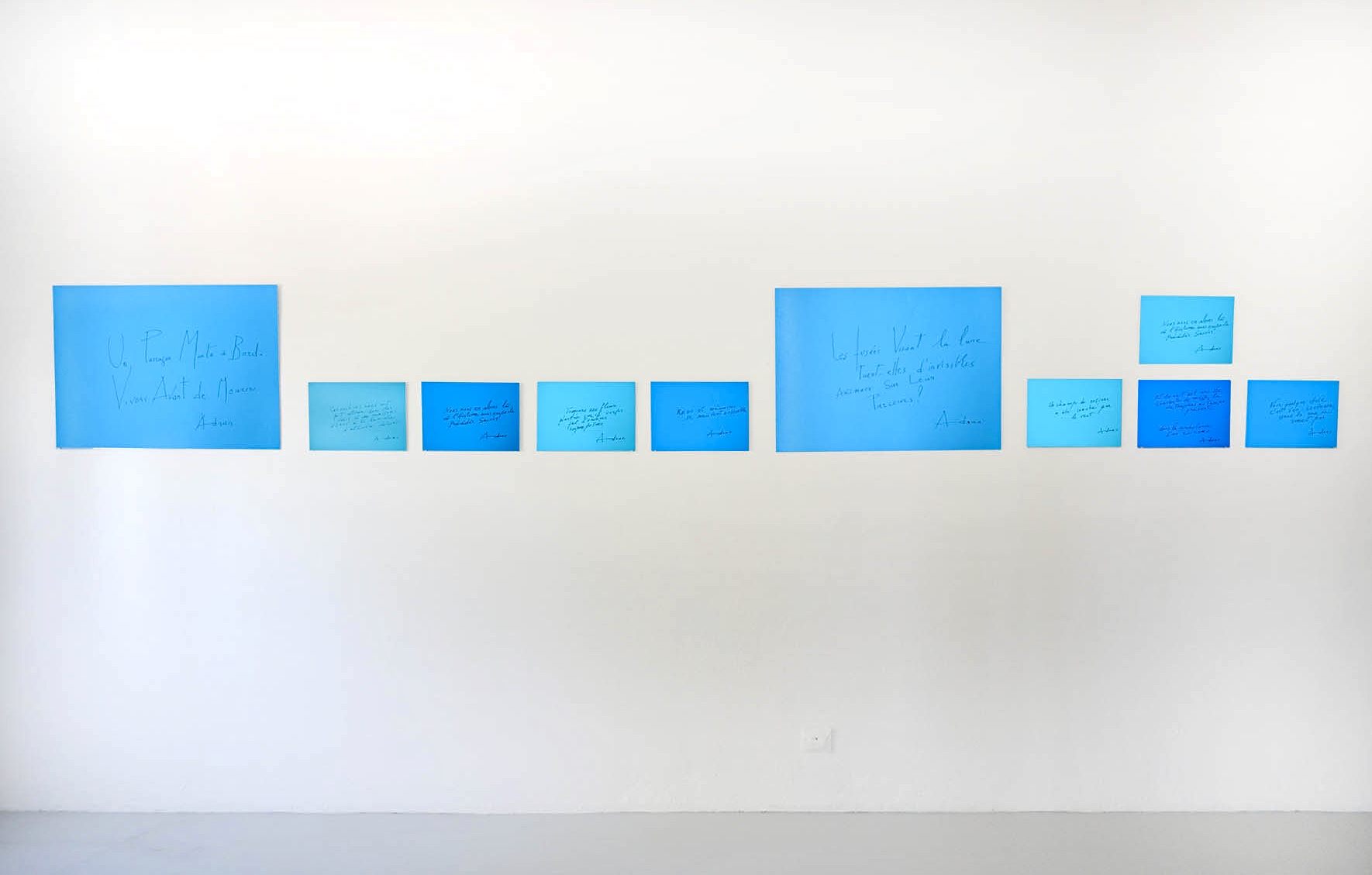 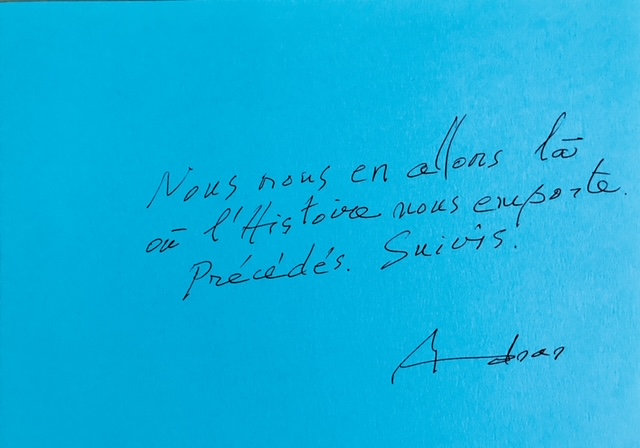 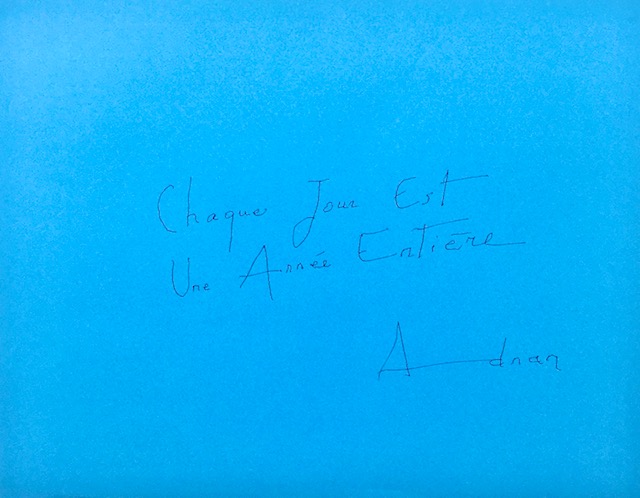 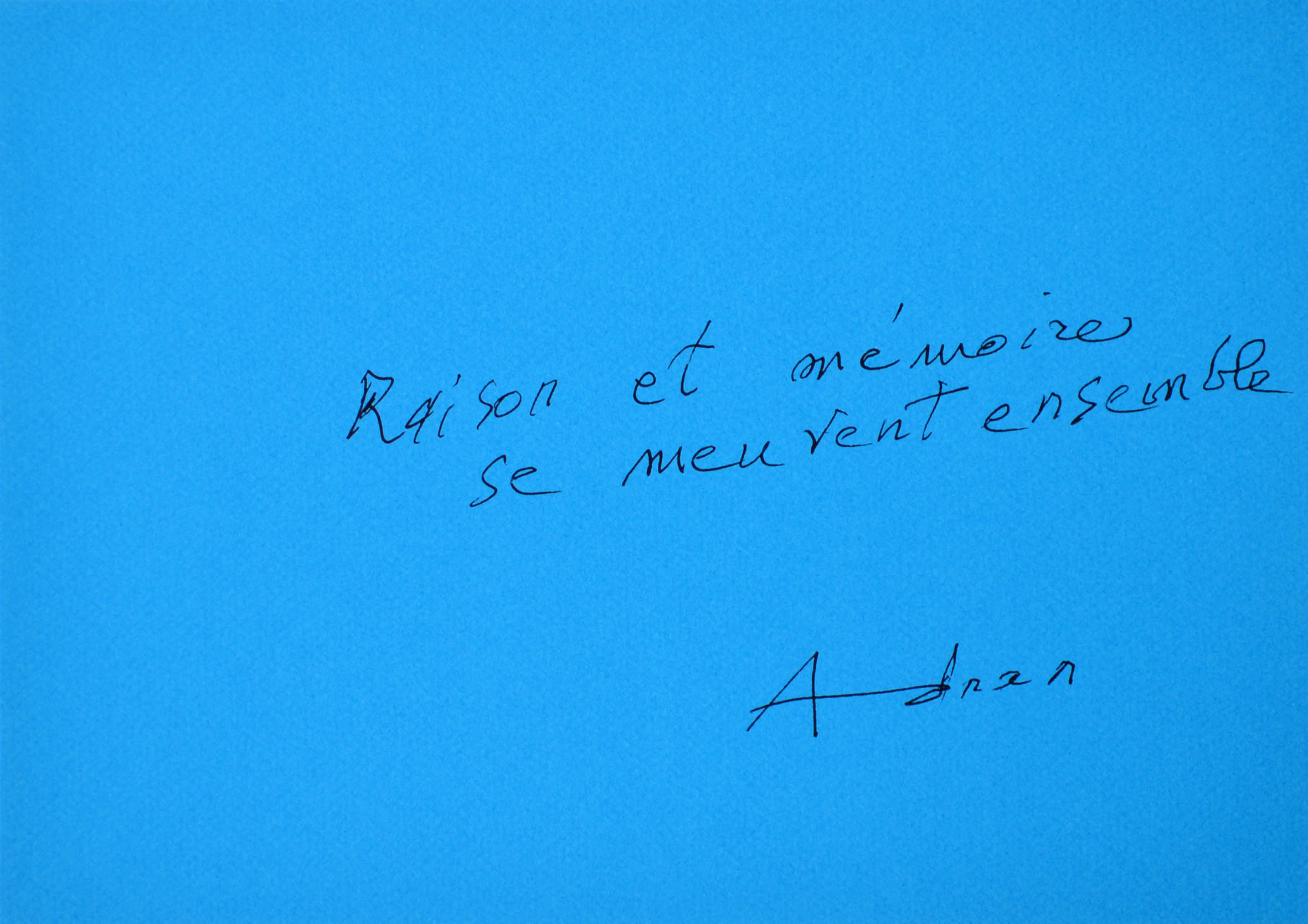