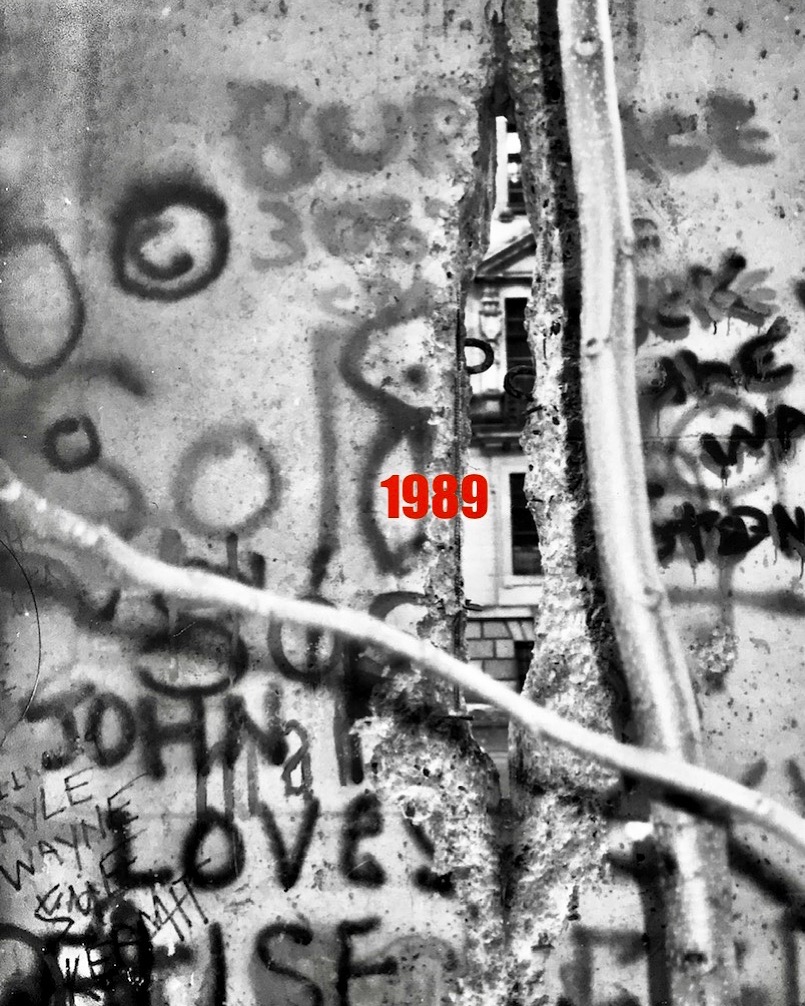 1989 was a historic year. This put an end to an era defined by the Cold War and clashes between East and West, between pro-Soviet dictatorships and Western democracies. The exhibition will focus on works only made in 1989 with a text of Noemi Smolik that will accompany the exhibition .

1989 – when the Berlin Wall fell, Windows opened the window to the world and Butler wrote Gender Trouble
The exhibition 1989 in Gandy gallery is devoted to the works of female artists coming from countries east of the Berlin Wall, which came to life after the fall of the Iron Curtain. 1989 is a year of epoch-making changes. The fall of the Berlin Wall made ideologies which lead to strategies of demarcation and wars crumble alongside it. In developed countries these would be imbodied in the form of the Cold War, whereas in the post-colonial ones they would often be waged in their bloody forms at the local inhabitants’ expense. With the fall of the wall, everything suddenly changes. Millions now have access to knowledge which leads to asymmetric establishment of social values – in society’s organization, trade, culture, and art as well. This process accelerates the interchange between groups with different cultural, ethnical, religious, and gender-based background. The consequence of this expedited exchange is, on the one hand, a certain standardization of a singular, somewhat global culture. American journalist Thomas L. Friedman talks about “flattening of the world”, which, on the other hand, makes gender-based, ethnical or religious identities, which had been overlooked or even oppressed, visible. Such standardized flattening of the world with simultaneous striving for visibility of the aforementioned minority groups is currently becoming a seemingly insurmountable ever-expanding paradox. The same paradox which nowadays leads to new ways of demarcation, border-drawing, ostracizing and deepening divisions, as it is depicted in the work of Anna Daučíková and Libuše Jarcovjáková which focuses on the position of gender.
The above-mentioned staggering development wouldn’t be possible without the introduction of electronic communication. Only six months after the Berlin Wall’s fall, Windows 3.0 is introduced to the market. “While the fall of the wall eliminated a physical and geopolitical barrier…”, writes Friedman, “the rise of the Windows-enabled PC eliminated another hugely important barrier: the limit on the amount of information that any single individual could amass, author, manipulate, and diffuse.”
It is obvious that such a chain of events inevitably comes with irreversible consequences as to the way we understand an individual’s identity. Only a few months after the wall’s fall, American philosopher Judith Butler publishes her now legendary bookGender Trouble.In the book she defines identity – gender-based or cultural – as not being ontological – innate – but as performative, which can be gained thanks to mass media, traveling and encountering different cultures. Such gained, performative identity incorporates an element of parody, in which Butler sees a subversive potential, which can be used to decompose and destabilize negative authorities. It surely is not coincidental that Butler develops this theory at a time when female artists west of the Berlin Wall but predominantly those from the countries east of it begin to focus right on those performative acts, mostly in the form of theater, where identity is played with and the strategy of parody is used. As examples we might use the performative events of Zorka Ságlová (Házení míčů do průhonického (Throwing balls into the Průhonice brook) Land Art Event andNěkde něco (Something somewhere) exhibition at Václav Špála Gallery), which under the influence of dismissive attitude of the general discourse became illegal. Because of their experience gained behind the Berlin Wall and because of the decline of traditional values, female artists from behind the Berlin Wall were dealing with pressing questions of an uneven position of women in society even more radically and with greater intensity than their colleagues west of the wall. Some of the dominant artists who deal with questions surrounding gender over a long period of time include Anna Daučíková and Libuše Jarcovjáková. Orshi Drozdik in Hungary, Ilona Németh in Slovakia and Lia Perjovschi in Romania are those female artists who in their works examine the topic of women’s position in society and art, the role of a woman’s body, and identity as such. The younger generation offers Marysia Lewandowska* from Poland while the first generation of women’s emancipation has its pioneer in Jana Želibská from Slovakia. In their conceptual works they handle the incorporation of performative elements into art and also the long-term position of women and their identity.
Noemi Smolik
Dr Noemi Smolik, art critic, art historian and curator, teaching art history at art criticism at the Univesity of Cologne. She is a regular correspondent of Frieze and Artforum, author of texts for ZKM, Fridericianum, Tate Modern and many other institutions.
Liste des oeuvres (pdf)
https://www.artforum.com/picks/ivana-bago-on-1989-81249
*Marysia Lewandowska (PL/UK)
Empty Chair,(pink and yellow),1989.60,8 x 102 cm x2
Photographic transparency, emulsion paint.

The work belongs to a series created in my London studio during the Round Table Talks taking place in Warsaw from February till April of 1989. Such an important political transition held a promise with yet unknown social consequences.

There were only two women present at the meetings, Grażyna Staniszewska representing the opposition and Anna Przecławska representing the government of the time. My response was to mark their presence by introducing a corresponding number of chairs, which appear as though the process of painting has been interrupted. The work explores the instability of representation through the qualities embedded in the photographic transparency with an adjacent political dimension.

Images from this group of works were first time shown in 1989  exhibition Art after the Empire: New Expressions in British Art, curated by David Joselit for the Hammond Galleries, Lancaster, Ohio, USA. 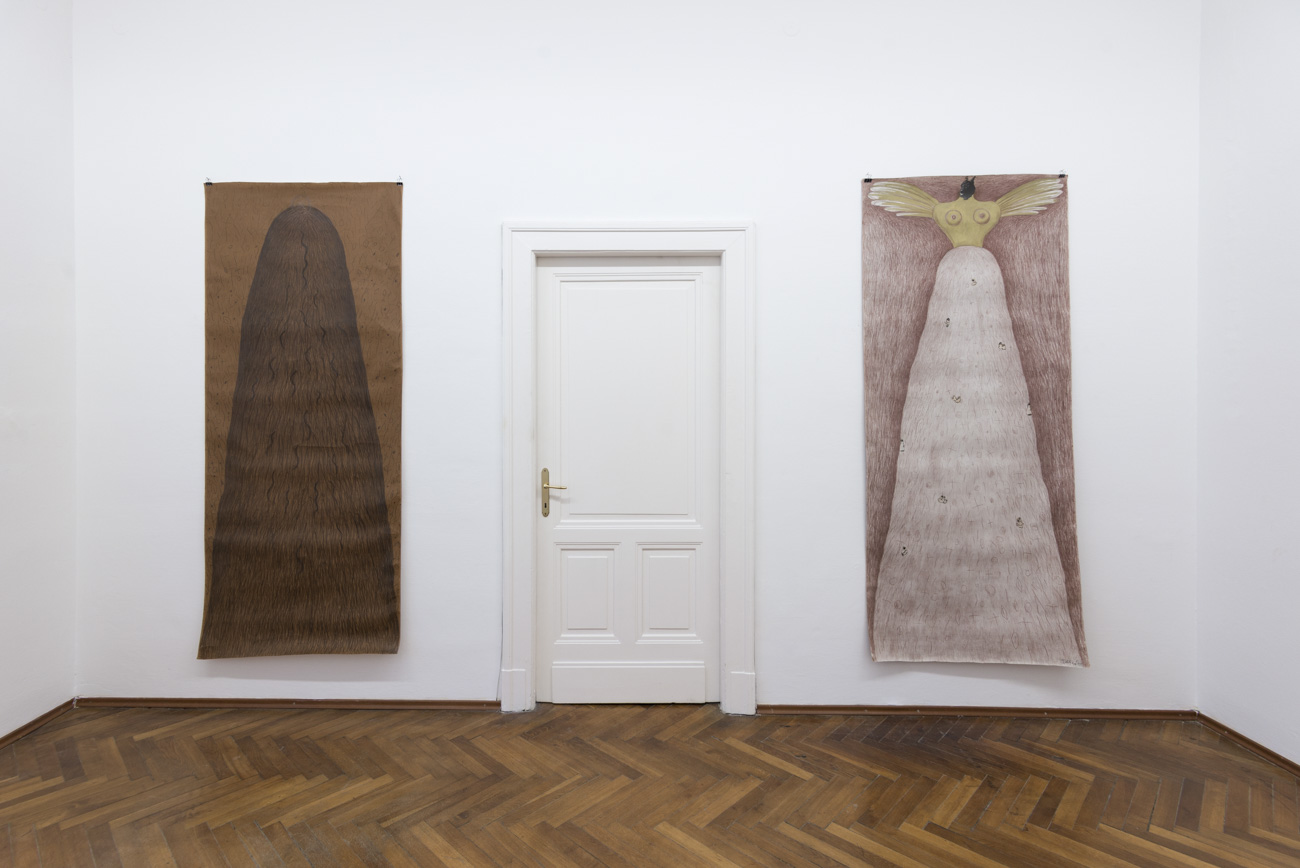 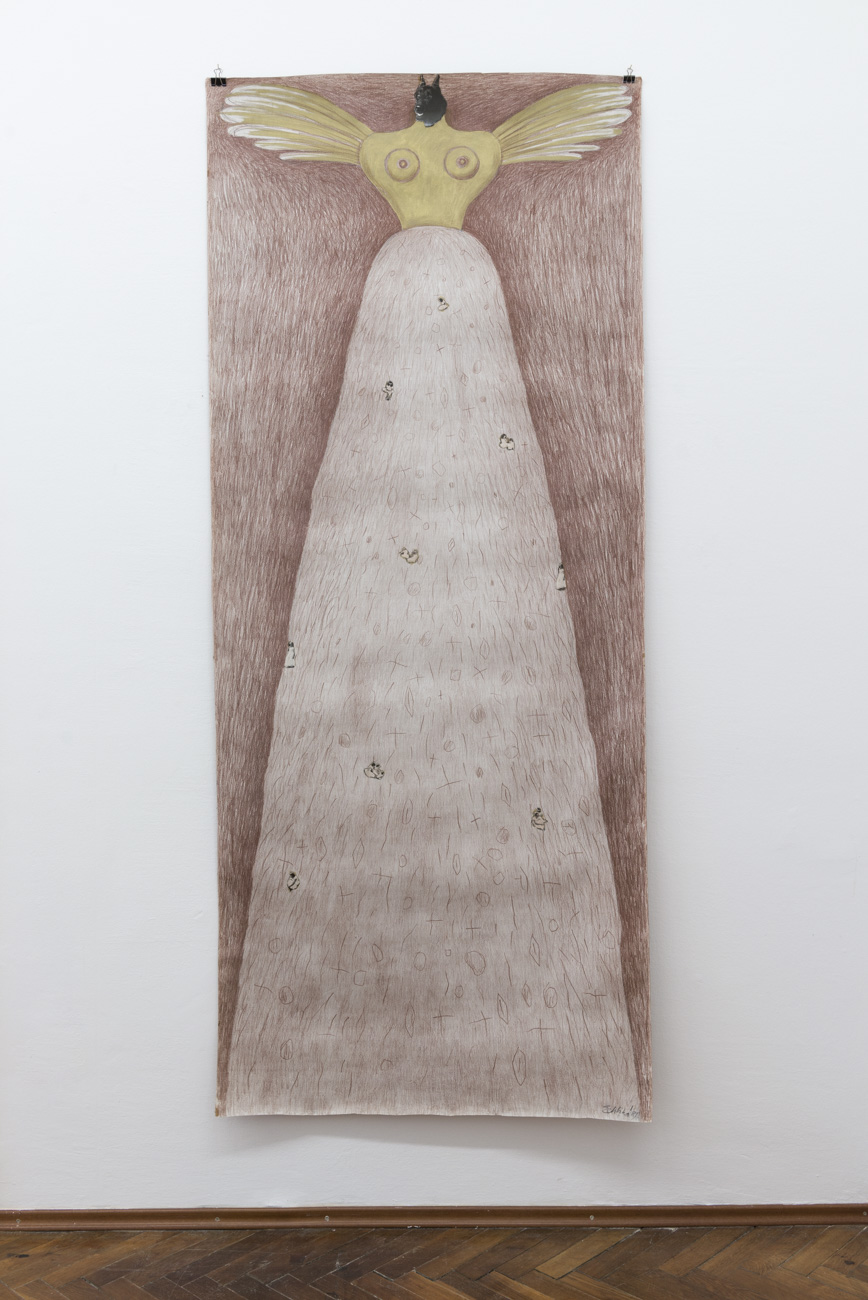 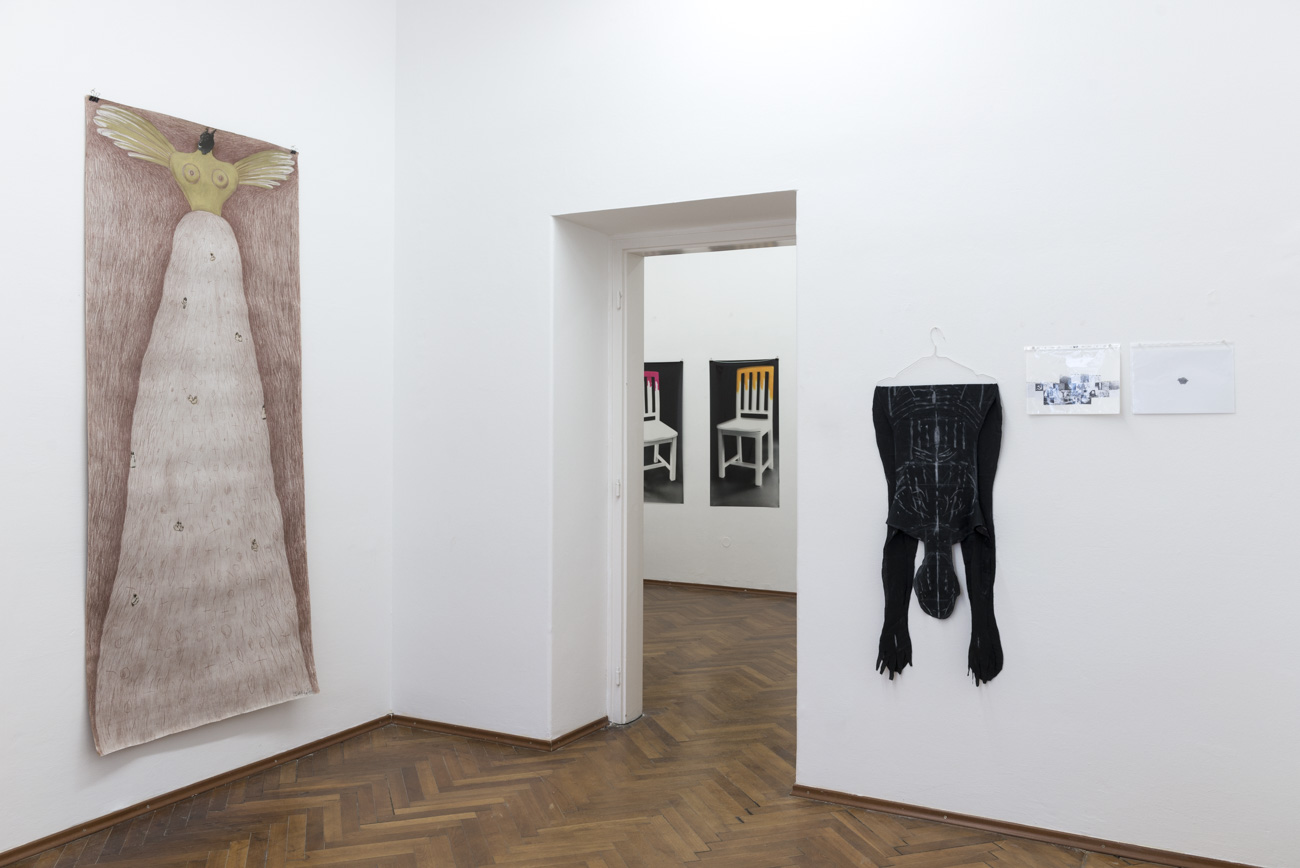 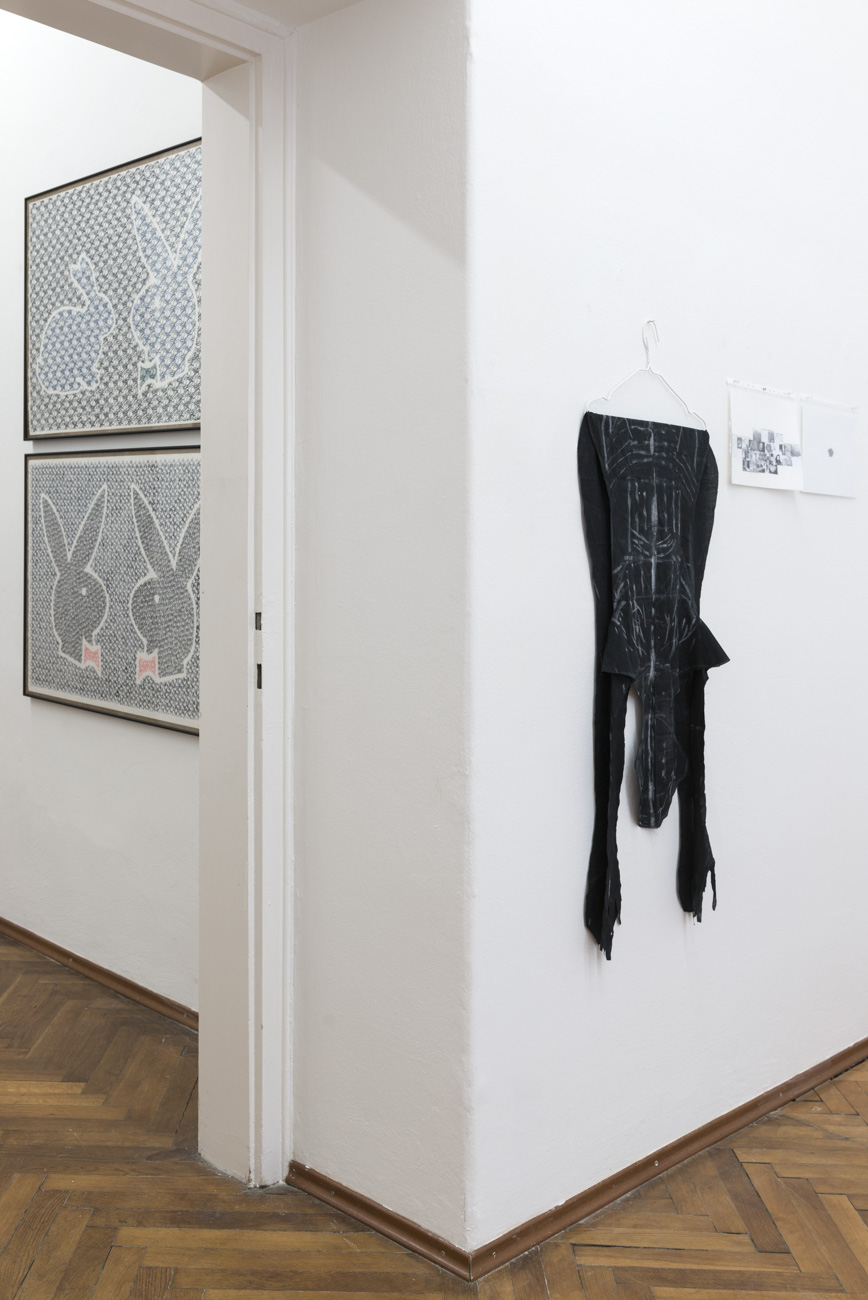 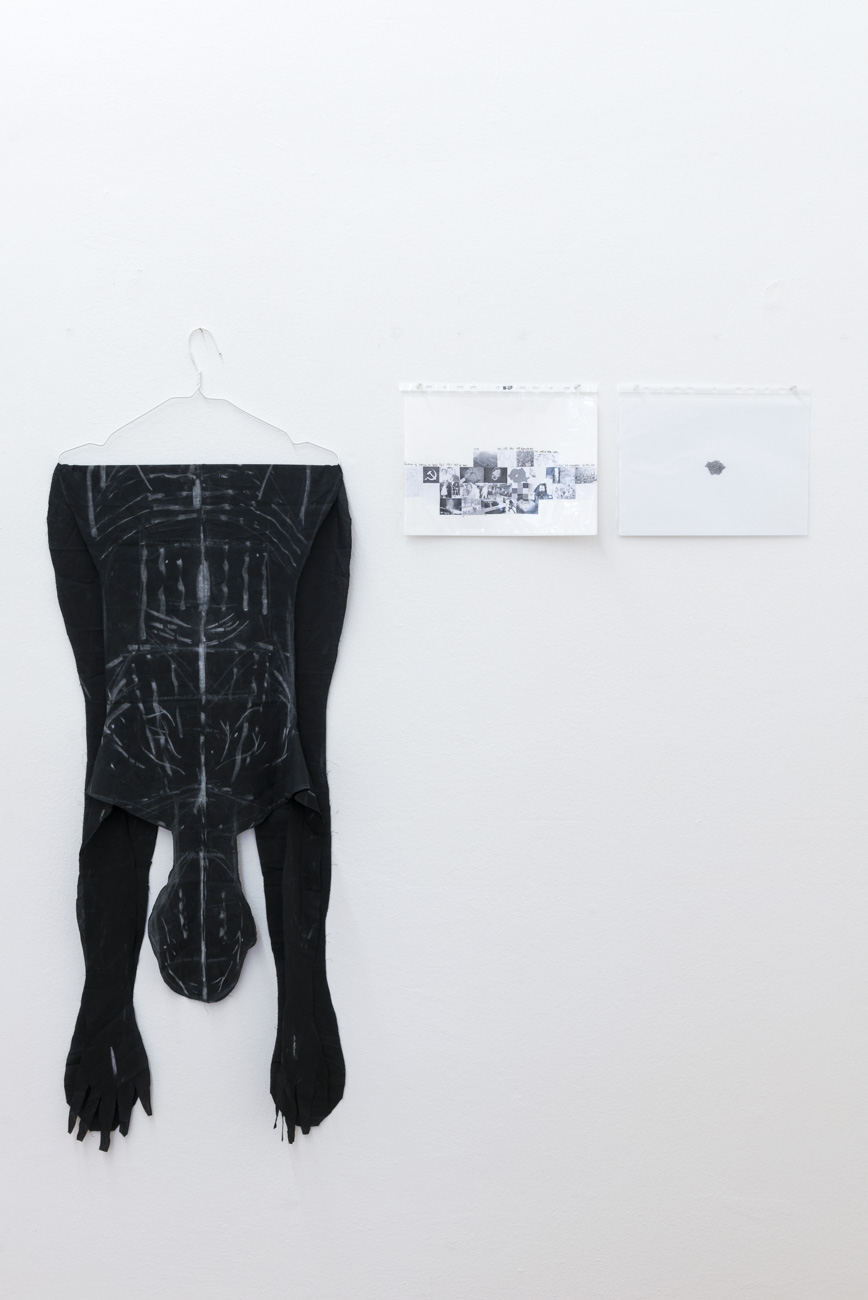 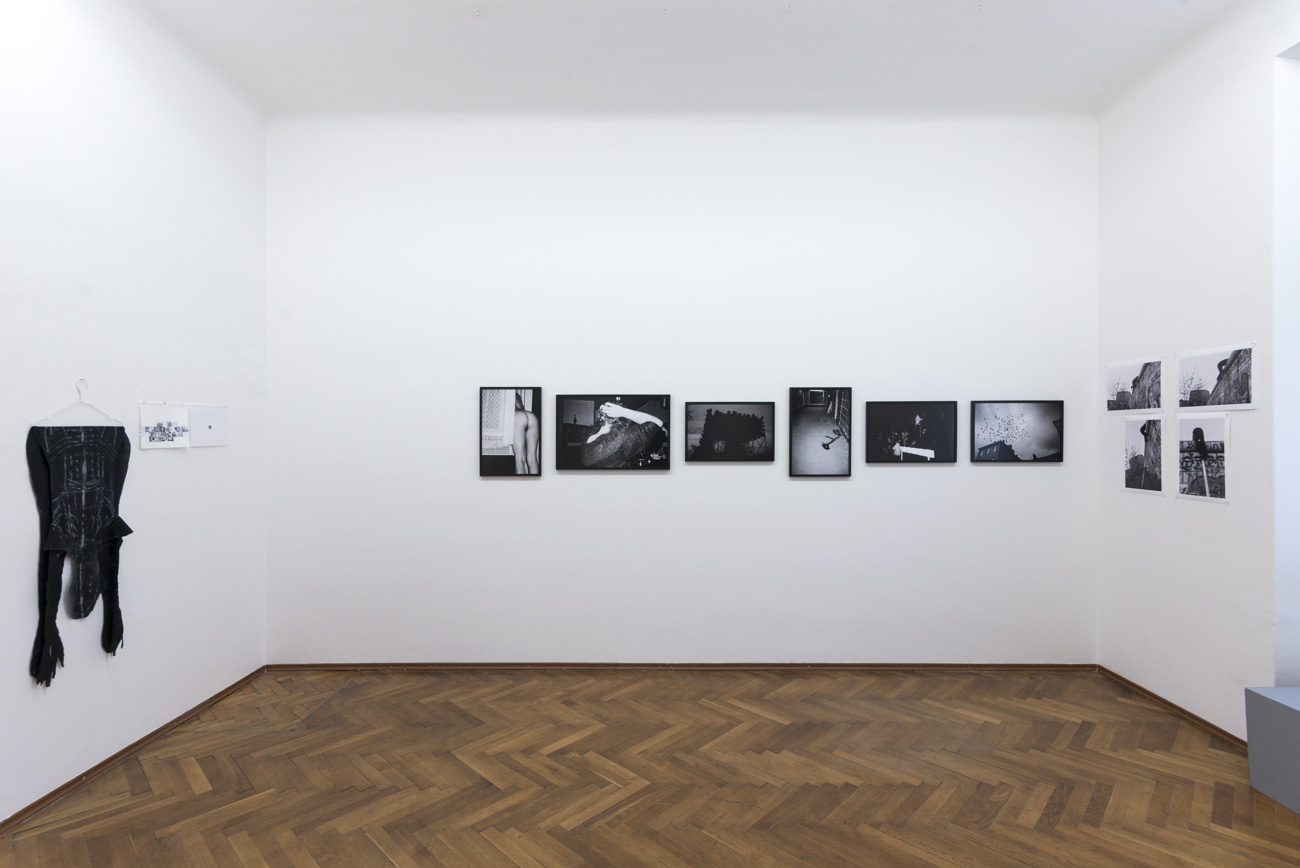 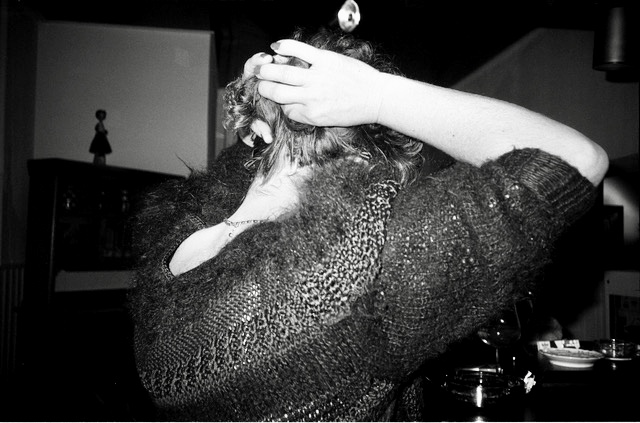 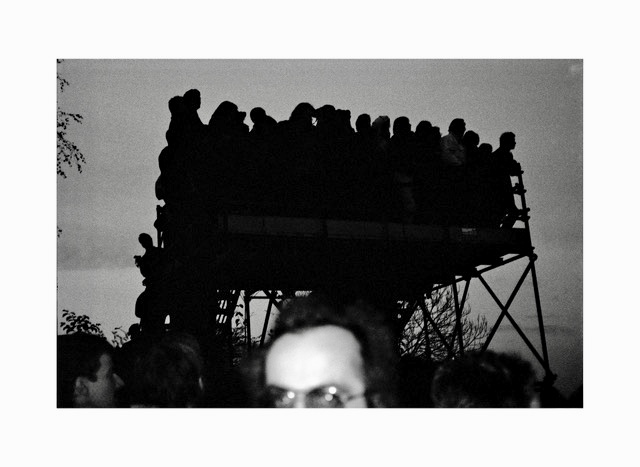 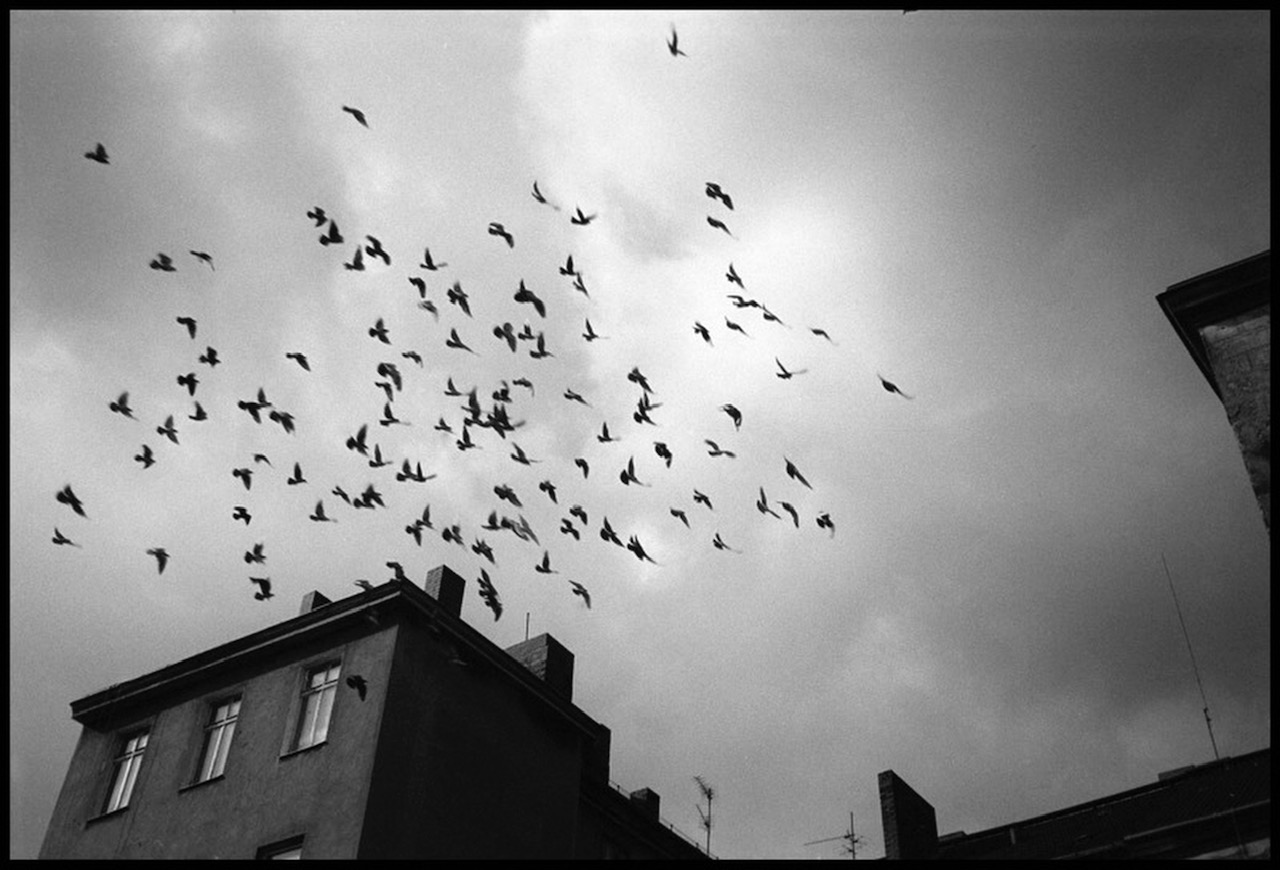 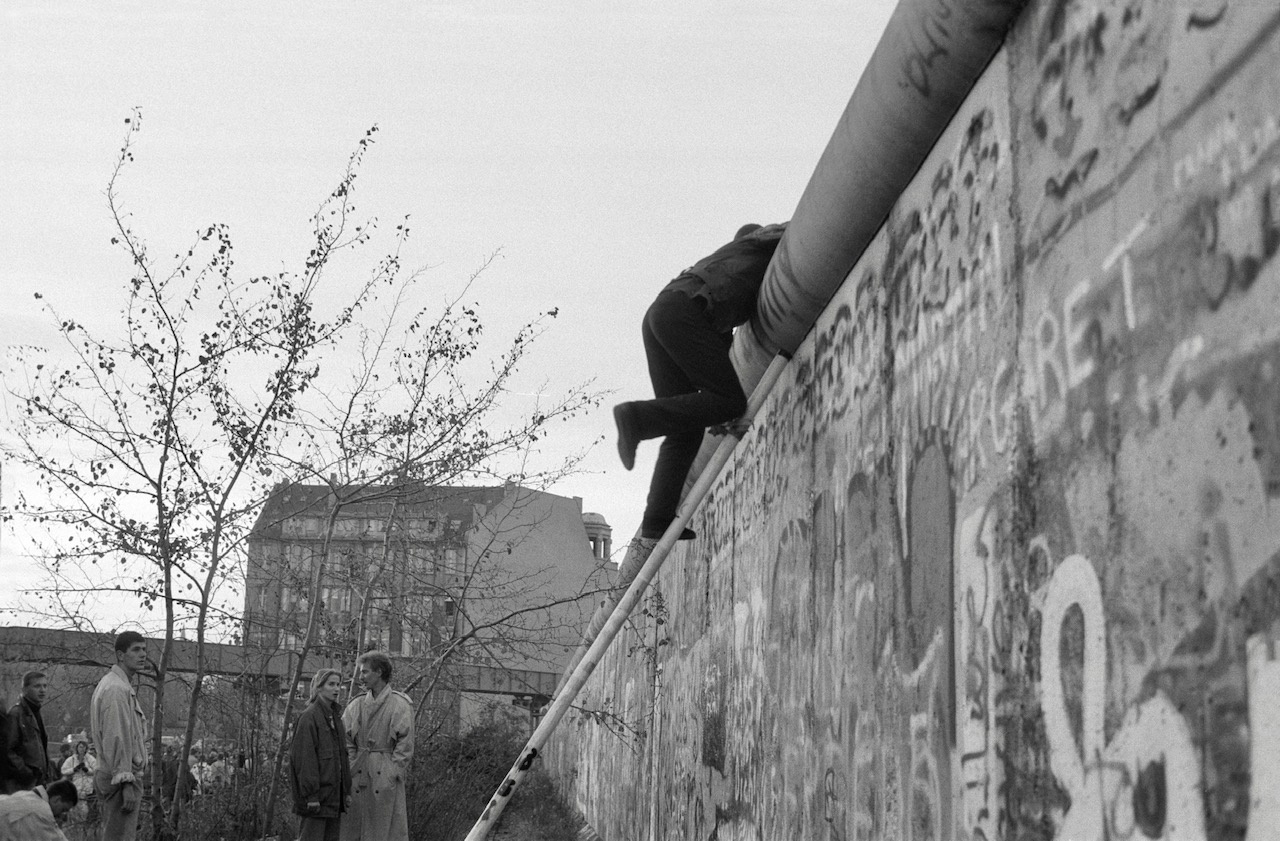 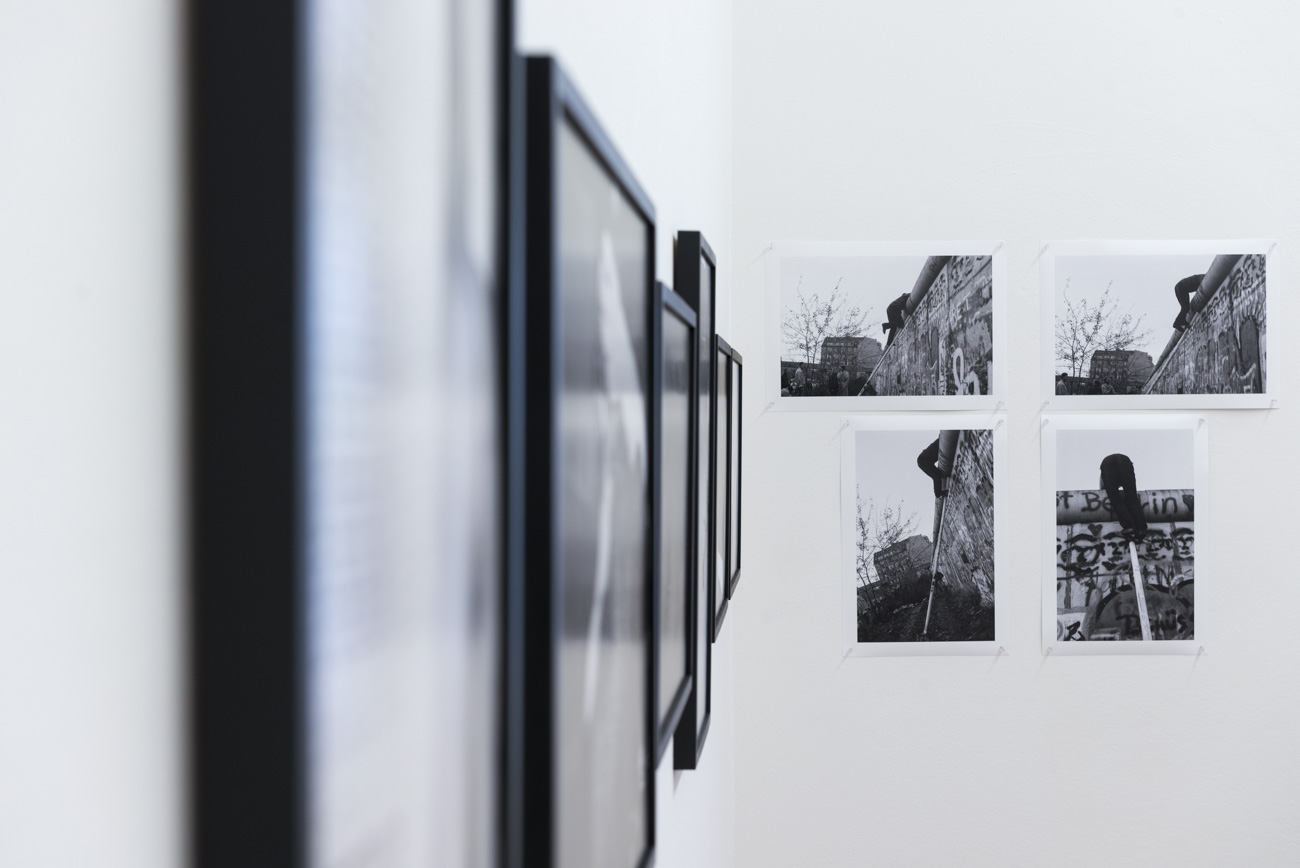 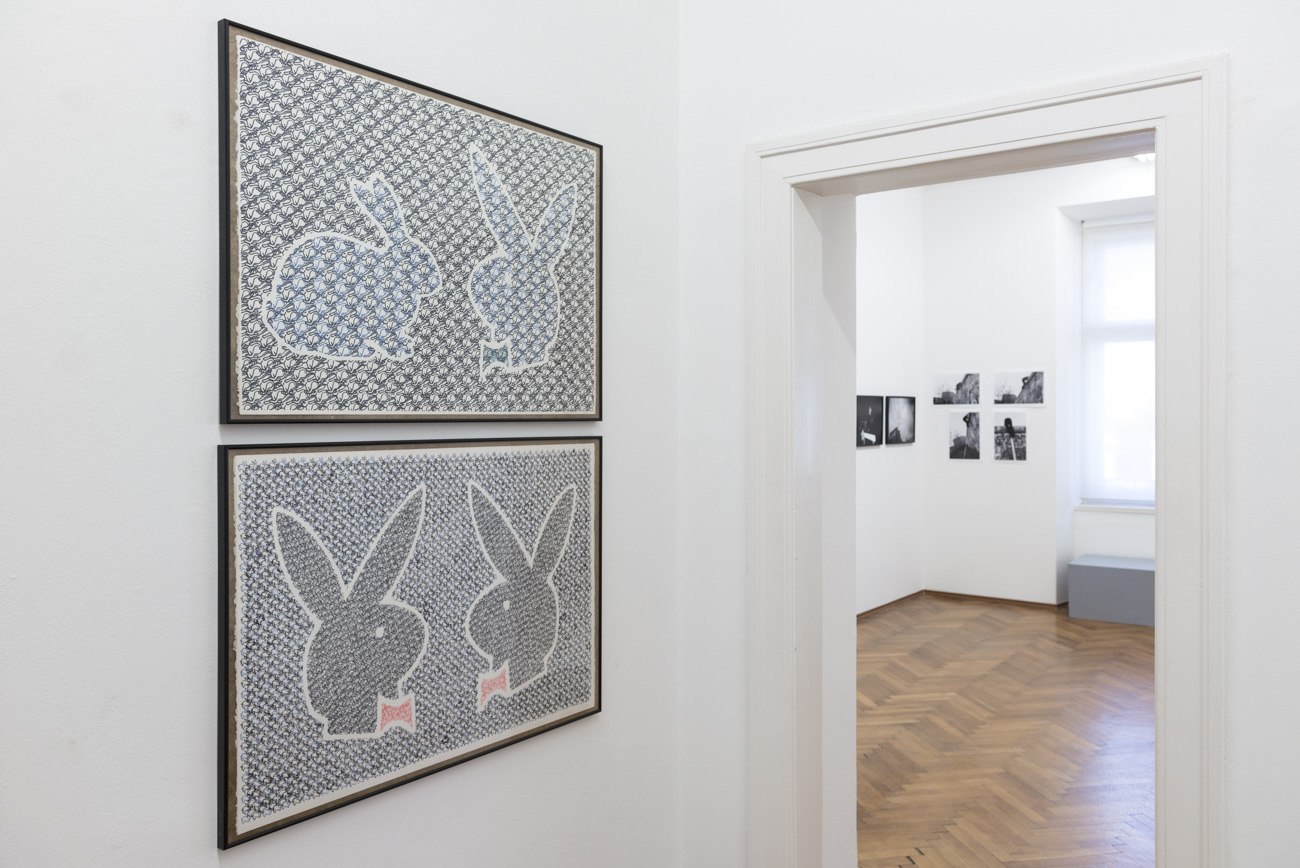 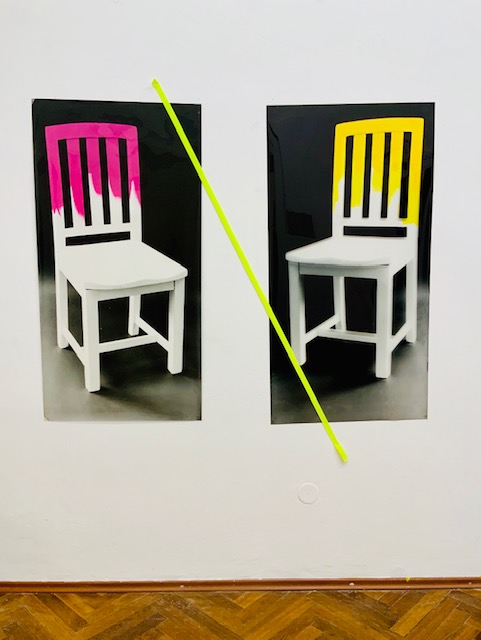 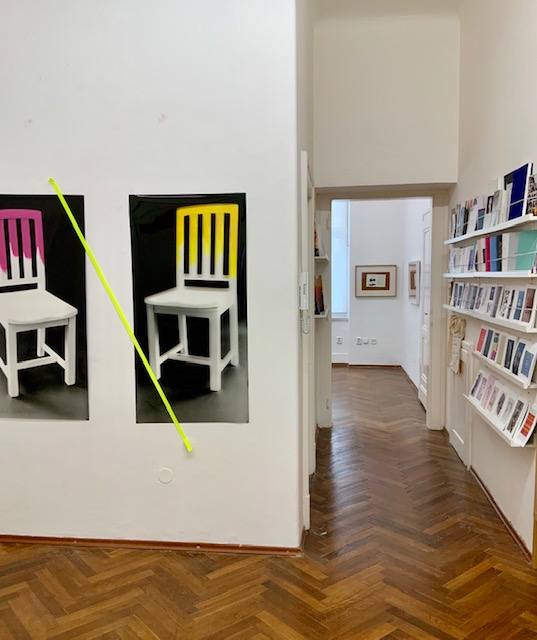 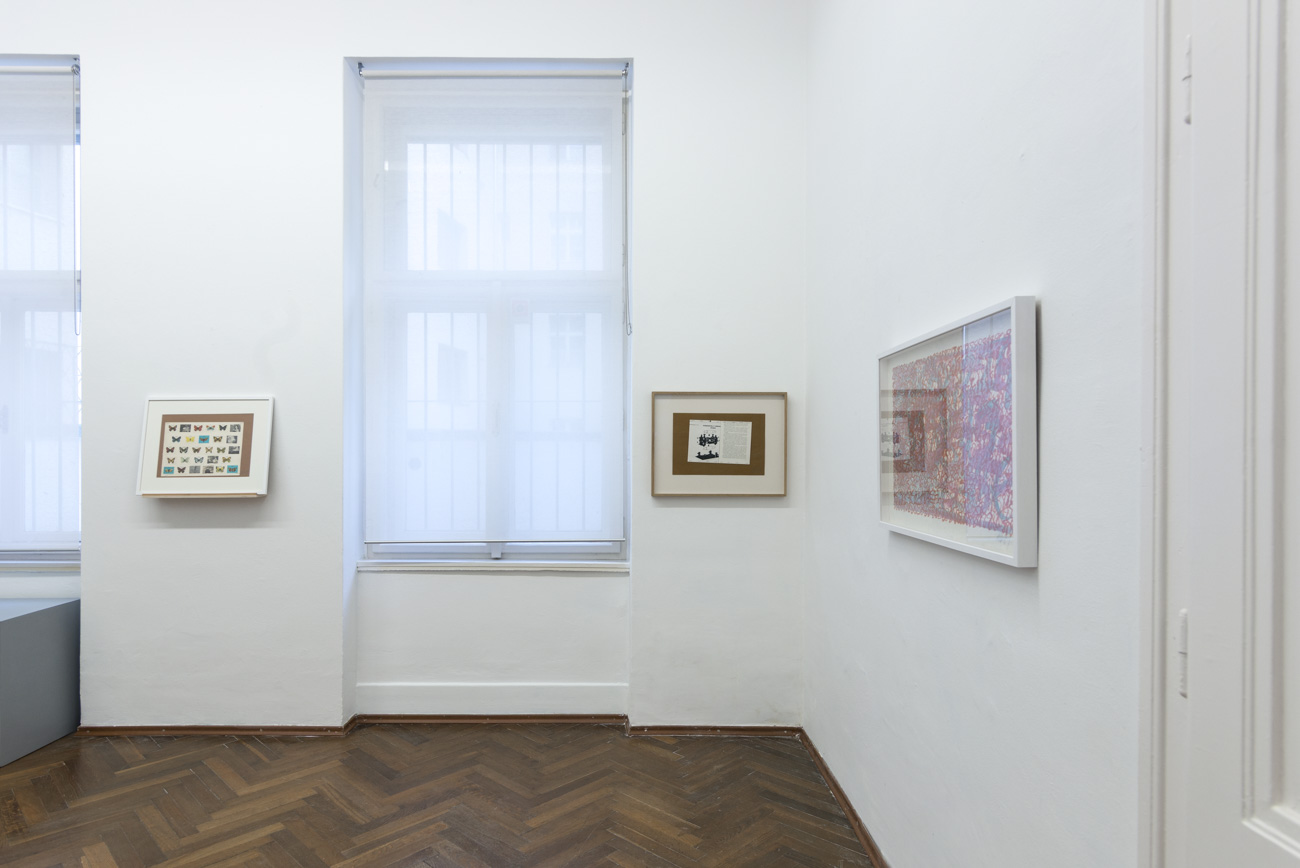 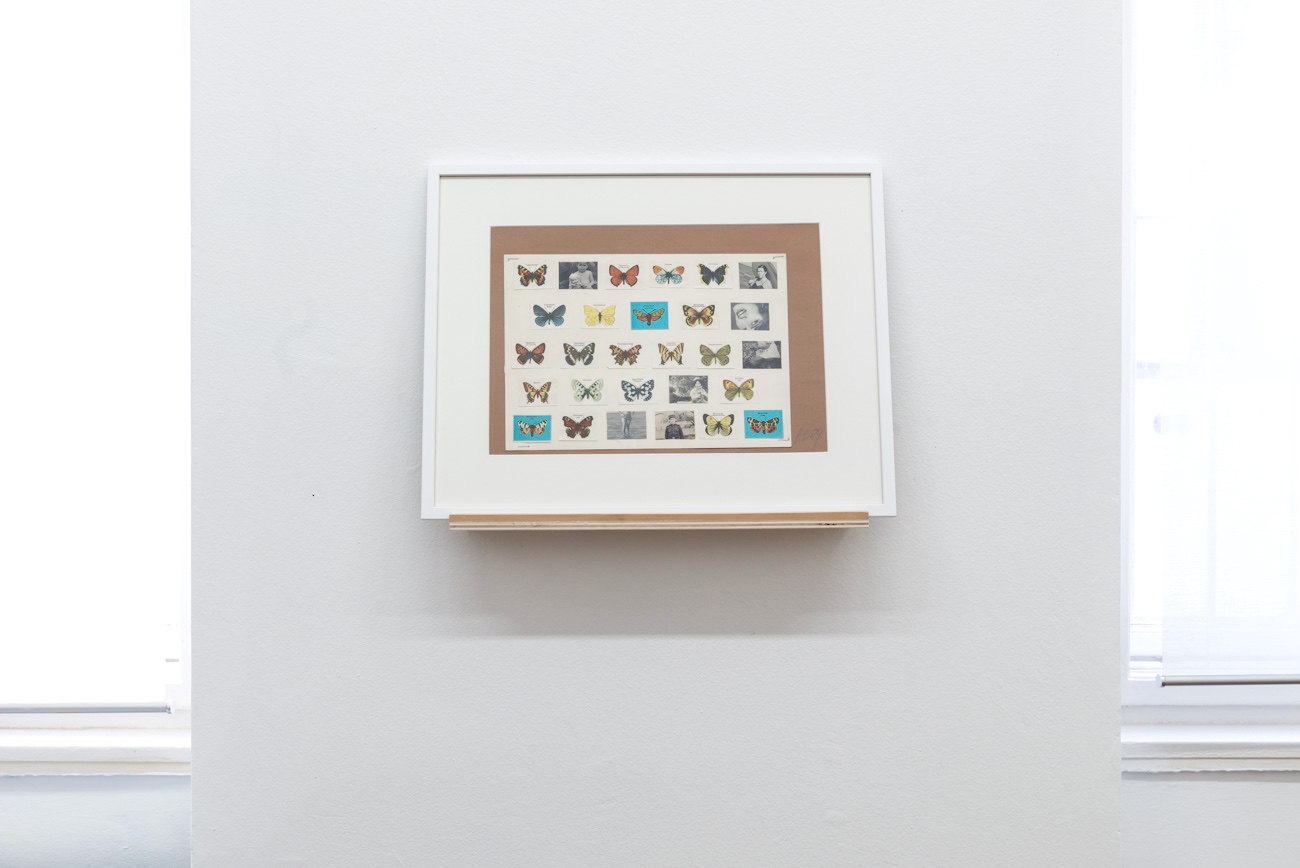 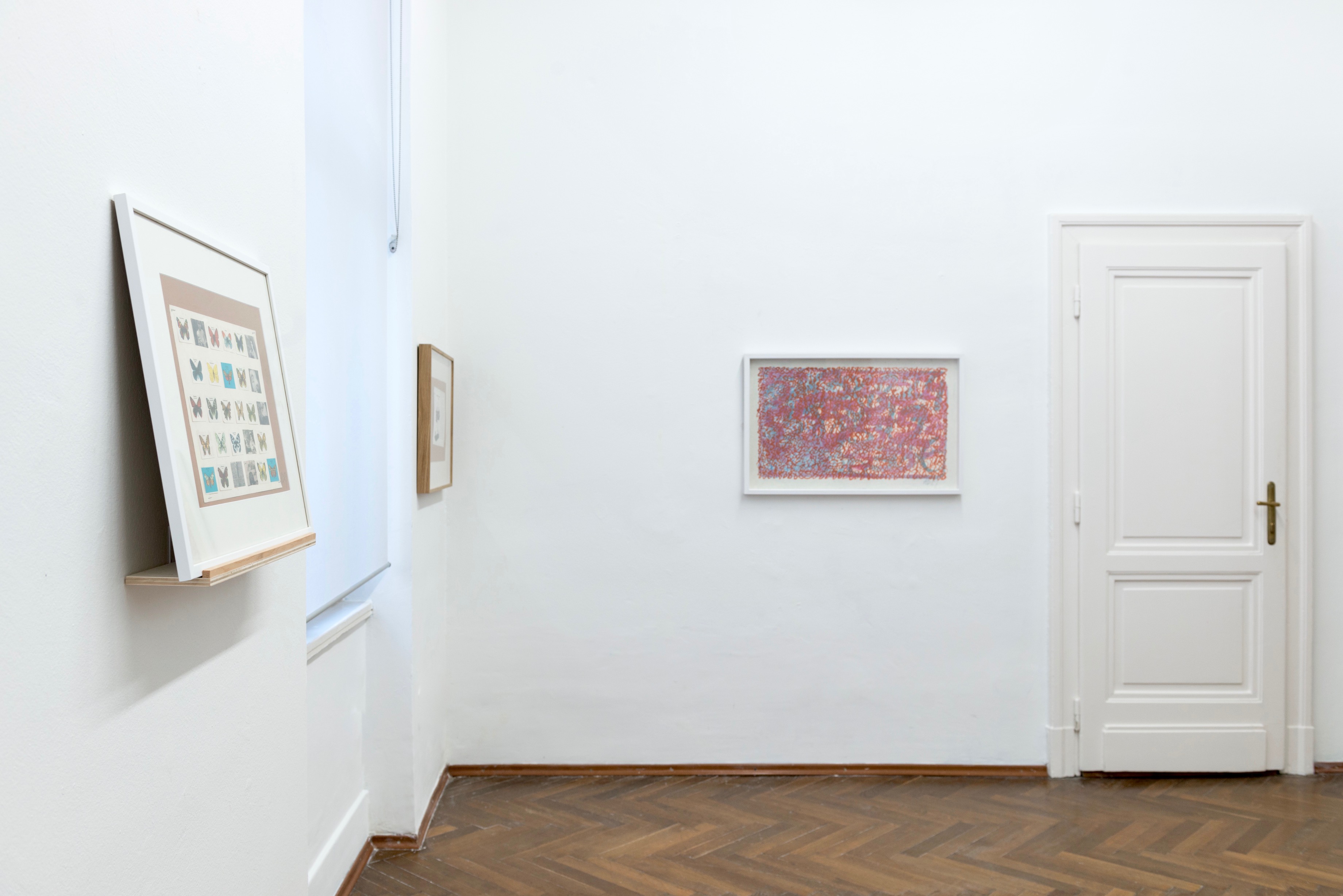 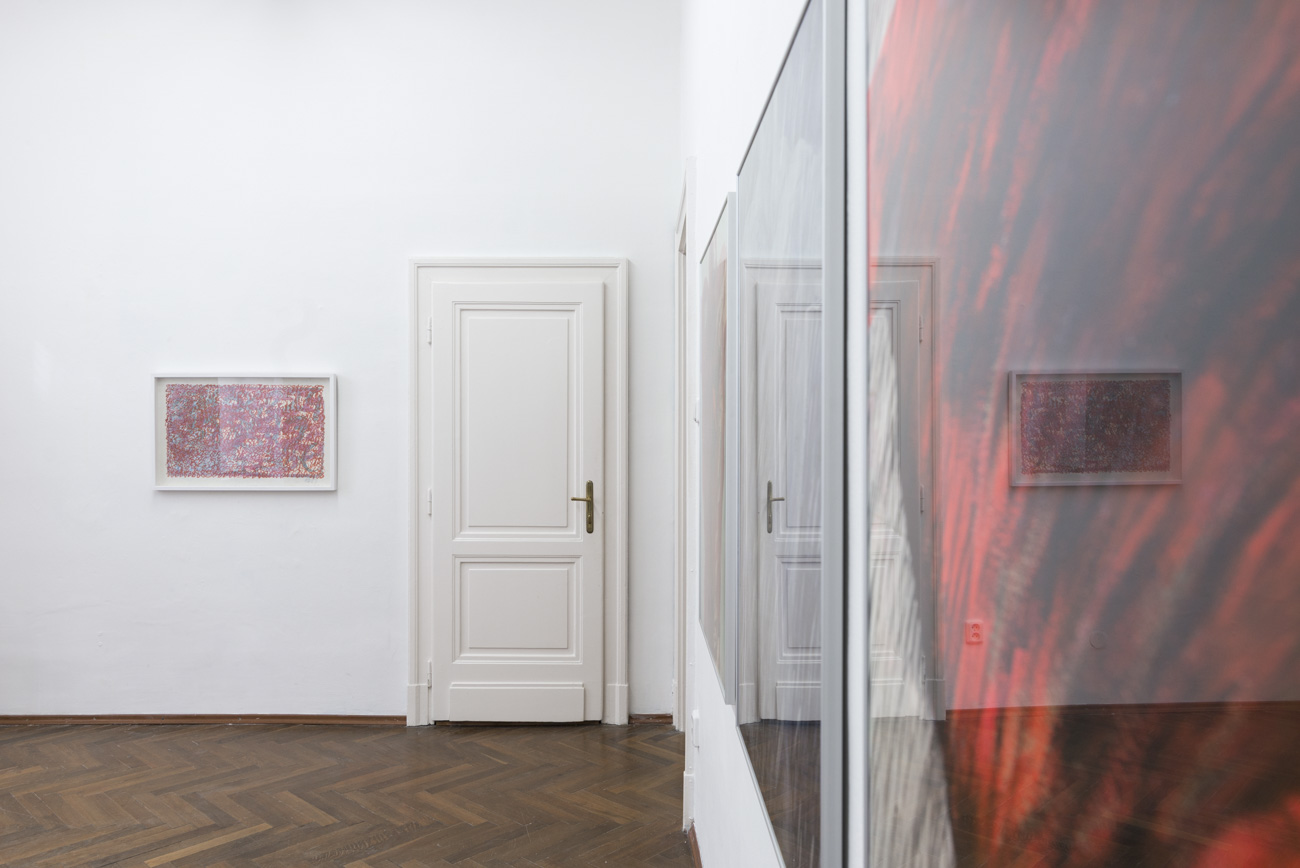 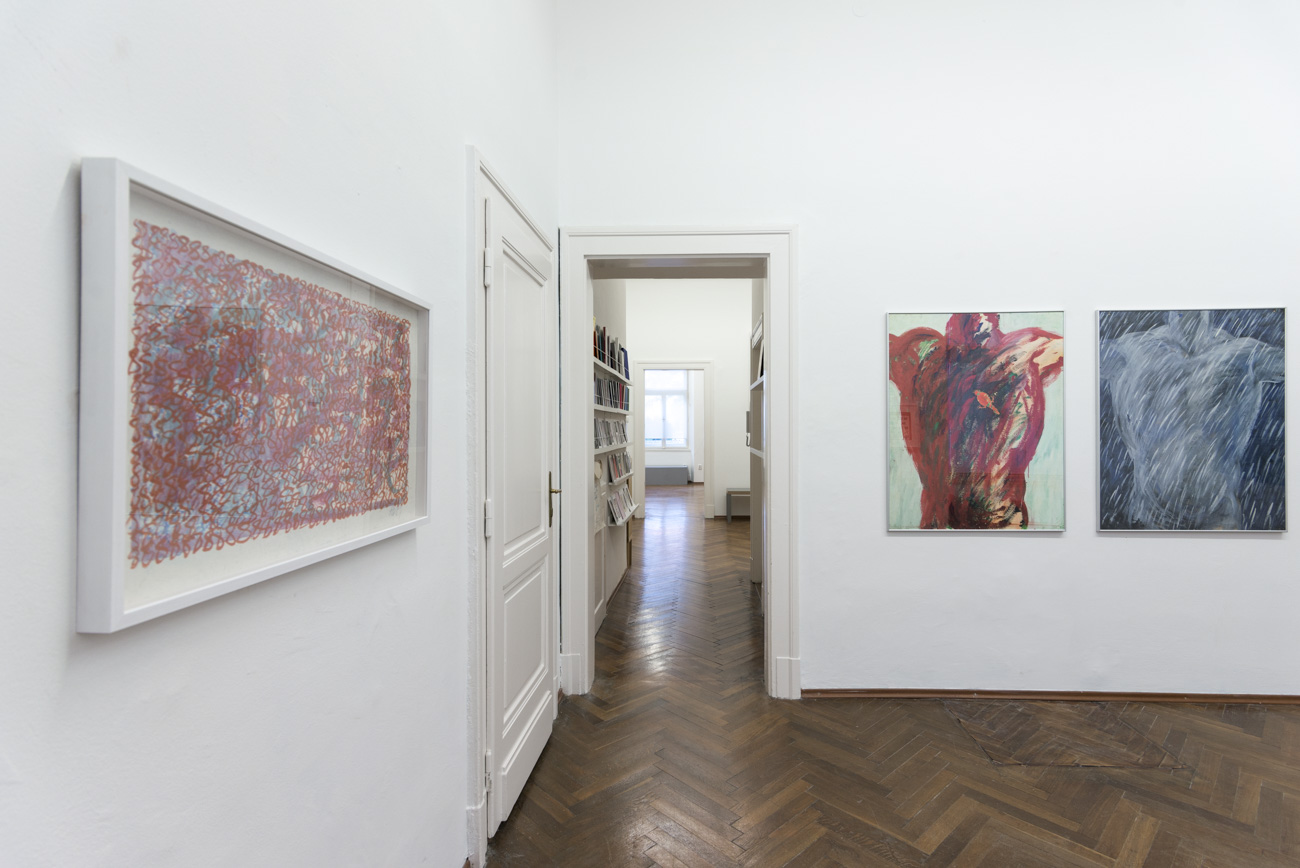 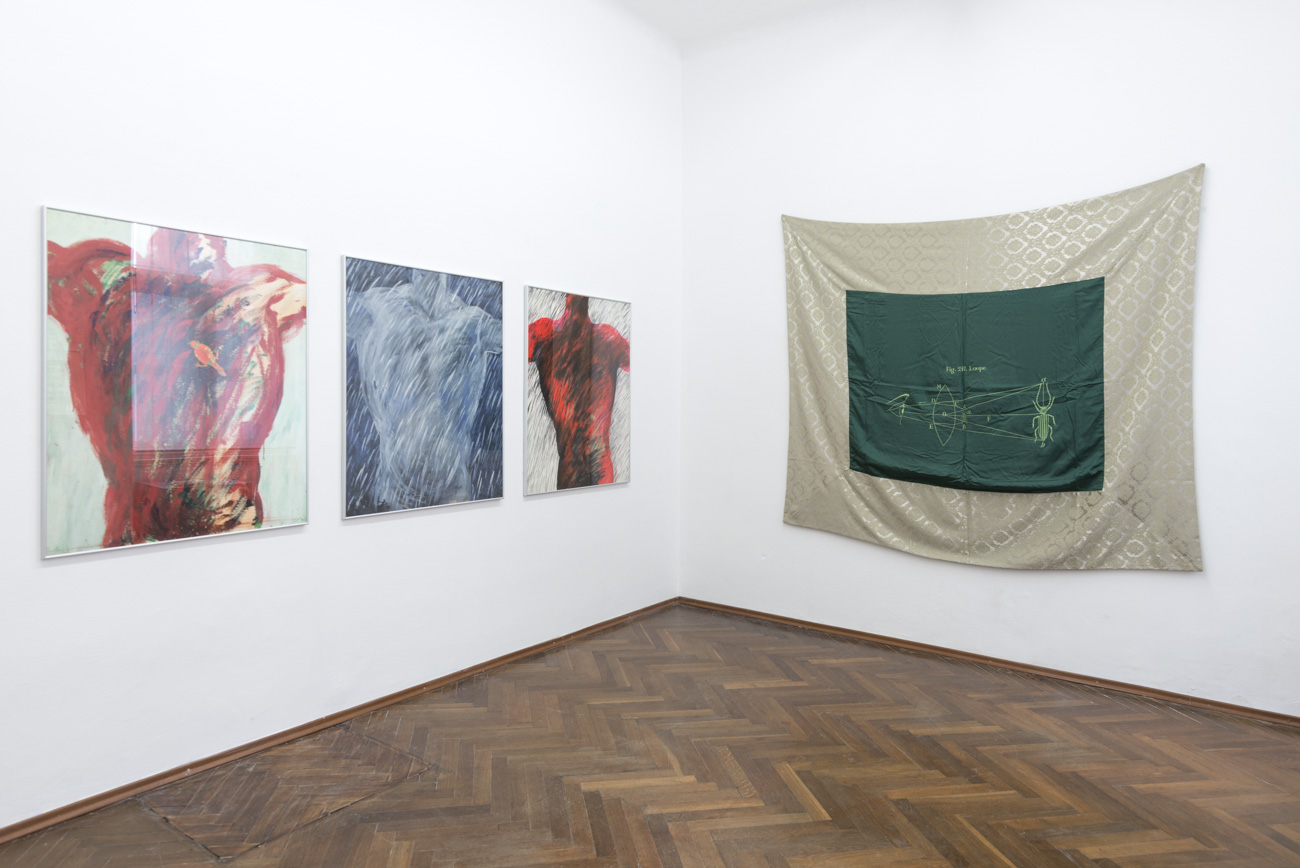