Public Views is an exhibition project which deals with different modes of perception of public space in today's cities and city structures. The question of the project differentiates between the ways the construct of the public is organized along certain lines of political and social thinking and how artists undermine or unmask the common view of the beautiful and the arbitrary. How do the visible facades of the city purport views that are different from what lies "behind the scene" of institutions and buildings? How can different social, political or tourist agendas be brought to the surface of traditionally conservative-oriented city views?

Public Views analyzes the otherness or, in Lacan's sense the reverse side of the mirror that is necessary to understand the complete identity of the self as an entity of internal conflicts and tensions. How can the self of a city be visualized with the means of art and at the same time live up to what cities are meant to stand for: outside versus inside of a whole which is neither constructed according to contingent lines of thought nor to pre-conceived strategies of organization.
The artists of the exhibition analyze the dichotomies of the visible and its implications for the general public. How thoroughly do we have to look in order to detect the contents of a given reality? How do advertising, street life and political agendas go hand in hand with a globalized notion of the city and how can divergent cultural practices stand out of homogenized city views? Are there alternatives to establish counter views to given realities? The artists of the exhibition will examine the possibilities of strategies to make visible what is not visible at first glance but can be detected on closer examination in order to understand the political or social barriers behind deliberately or arbitrarily constructed visual facades. 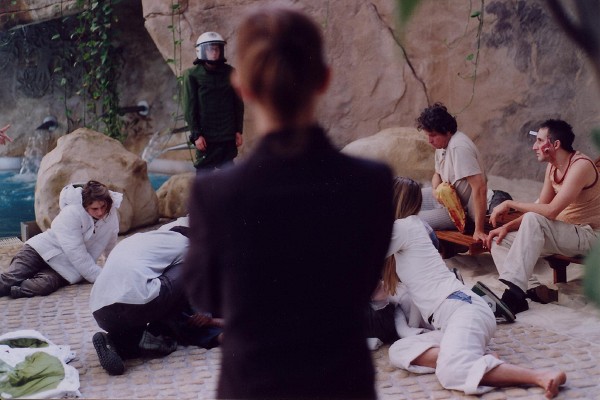 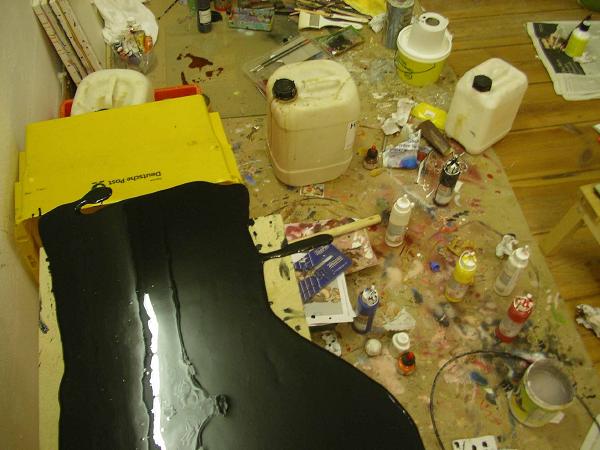 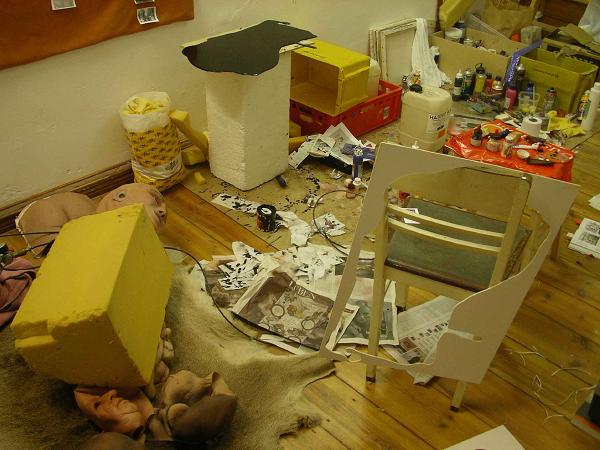 Helmet with chocolate fountain on top The backdrop to this piece are the living dead, the so-called zombies: When the statistics have reached capacity, the excluded return. Their search for salvation brings them back to the place of their symbolic death … We make use of the archetype of the zombie as it has entered into cultural memory via Homer's Odyssey , Haitian voodoo and Hollywood movies, in our quest for a direct confrontation with true universality. reale reste / real remnants wants to make visible what is excluded in all-inclusive post-politics [Agamben/Rancière] and how this excluded dimension can be politically realized in a new way. 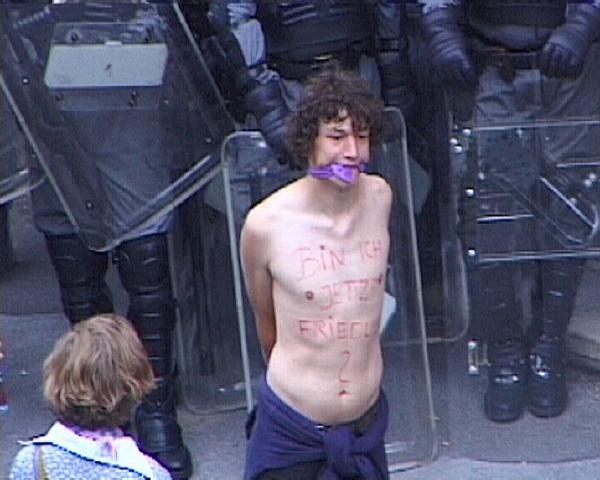 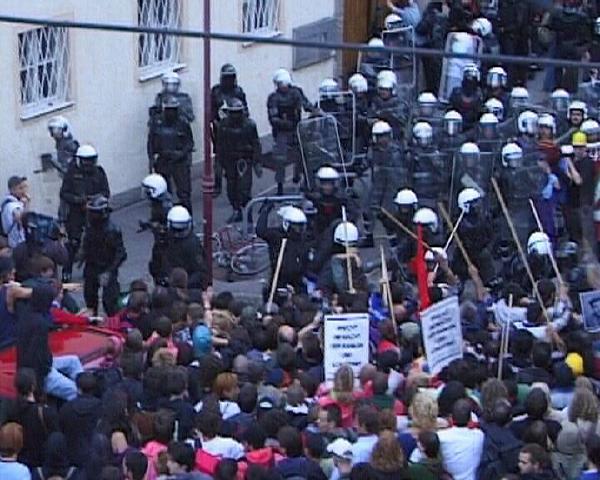 The video tackles the events of 1 July 2001, surrounding a demonstration against the World Economic Forum - a private lobbying organization of major capital - meeting in Salzburg at the time. "At those meetings, in the absence of the public, billion dollar deals are set into motion by the self-appointed 'global leaders.' These deals bring wealth and prosperity to a few, and exploitation and poverty to many. To assure the orderly proceedings of economic globalization, the conference facilities, located in the center of Salzburg, are largely blocked off and all demonstrations are forbidden other than a rally at the square in front of the train station." This video gives insight into the course of events of the first "anti-globalization demonstration" in Austria, which was forbidden by the police, 919 demonstrators were encircled in a police blockade and detained for over seven hours. 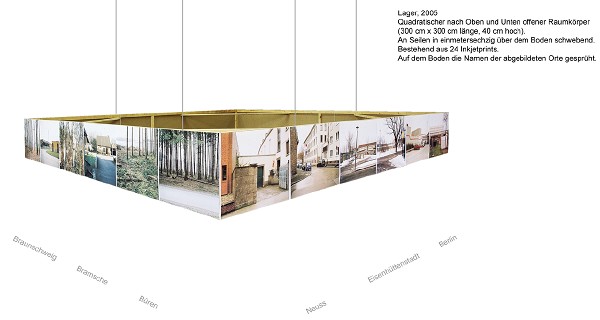 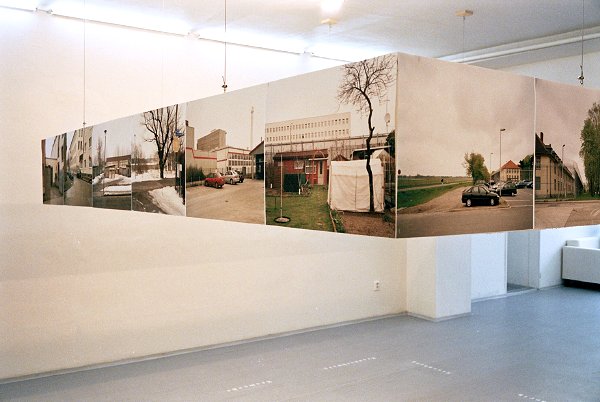 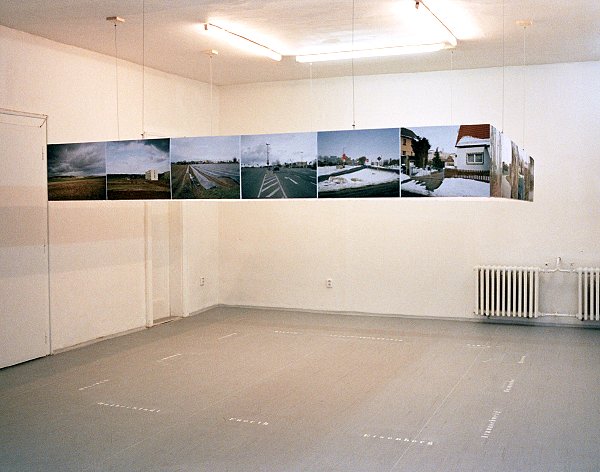 Markus Dorfmüller‚s work documents the hidden surfaces, which are well visible for a public but hidden regarding their contents. From 2004, Dorfmüller photographed all refugees camps set up in Germany. There, asylum seekers are detained for a short or a longer period or even until their deportation. The work unmasks the surrounding landscapes and zones where these camps are located ˆ behind a wood or supermarket, in a rural neighborhood or residential area. The photographs can be described as landscape studies of semi-urban places, which do net tell about the specific histories of the place. Only the visible surface tells about their existence. What occurs „behind the scenes‰ can only be fathomed from reports and non-verifiable information. 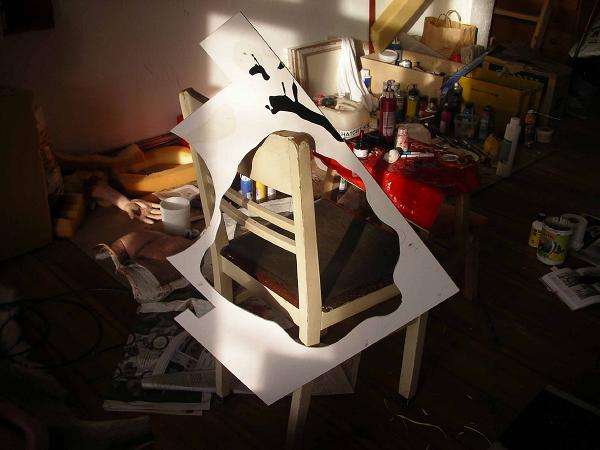 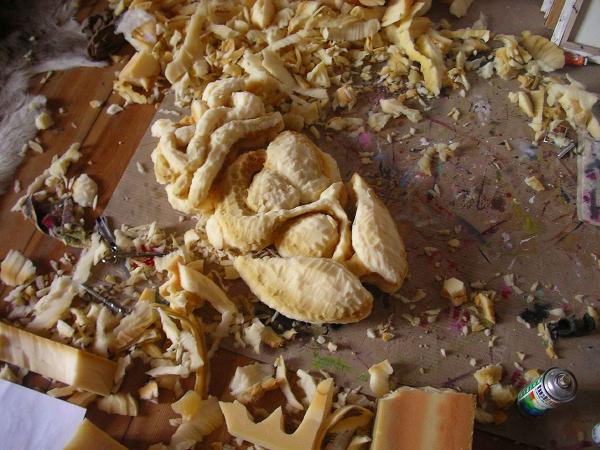 Petra Gerschner's photo installation traces journeys, the artist has taken to let the constant movements and transformations of the environment become manifestations of the traveler's fast modes of perception. The changing experiences with time and space formed the post-modern and post-colonial subject who has been exposed to a loss of maps and attaches less importance to geographical departure and arrival points than to interim stages, which can only be perceived in passing, thus concentrating on the significance of visual, linguistic and cultural codes of interaction. Often, a discrepancy between the visual and the linguistic content and its cultural context occurs to pose questions about possible constellations of the actual plots or scenes.