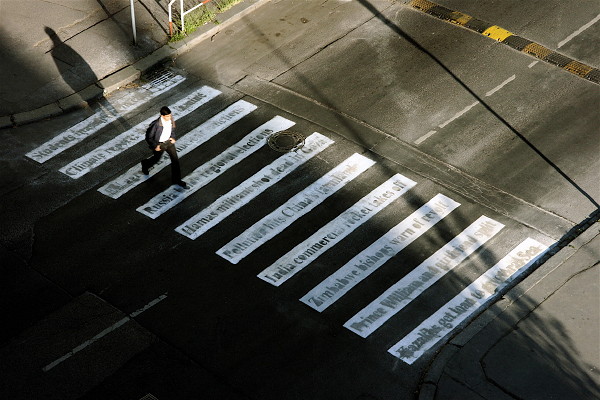 Even if Adam Vackar has recently developed his own work that has led him to take part in a number of respectable exhibitions, even if this work remains wide open to variation, evolution, metamorphosis, which for the moment keep their future profile, their identity, largely open, one notices certain structural traits that dominate his artistic language. Of this, the exhibition at the Gandy Gallery gives us a true picture. Vackar's works are anchored in the reality that they often start from in his efforts to discover their possibilities. A street in a European city (News Dispersed), a road at the southernmost tip of South America (Towards the End), the body of the artist himself (Slap) are here the impulses, the place of reception of what Vackar invents from these selected situations. At first sight, these settings are not particularly striking; they suggest to the viewer a reality that initially appears banal (this is particularly true of News Dispersed and Towards the End). This anchoring in what is, however, does not constitute for the artist an end in itself; it does not exhaust reality, since it seems that Vackar can never remain with reality. He always has to introduce a displacement of reality into reality in order to create; there always has to be something in reality - a modification, an intervention, an addition - which has the last word, to make something different out of that which is. This displacement is not an escape from the world, but it is a thrust into it, a disruption of its constituent parts or of its logic. In News Dispersed, for example, the artist uses the city and the traffic that runs through it in order to deal with the passing of time. By inscribing large headlines from daily newspapers on a pedestrian crossing and then letting cars drive over them and erase them throughout the day, he shifts the reality of the city into zones where, by using its declared efficiency, it serves something else. In Towards the End, it is the road that leads to the southernmost point of South America, Patagonia - the road at the end of the world and therefore a priori the least marked-out route or the least looked after road - which finds itself reconfigured by lines traced out with flour on the sides and in the middle as if to redraw the frontiers, in a personal, temporary manner, of the place that represents the most extreme point of the earth, in order to appropriate it for himself. Here, the end of the world is used as a utopian metaphor of itself: even at the end of the world, even at the limit of what is real, it is always possible to alter this, to make a gesture, and to transform concretely - even if just for a moment - the principal of reality. With Slap, it is again reality that Vackar employs: turning himself into a modern Saint Sebastian, Vackar, chest bared, receives full-force slaps in the face from someone unknown to us. Covered in white powder, his body produces a light cloud with each blow. What better way to say, what better way to demonstrate, that the artist truly bears the brutality of the real - the starting point of his work, the moment of the impulse of a process - without ever truly accommodating himself to it, without ever submitting to it completely? How better to experience violence without actually submitting to its rules? There is always a shift - a moment of art - that saves the situation from fossilization; at the core of this most massive, violent, and sudden gesture, there is always a possibility to invent something. With Main d'Œuvre, a new work shown at this exhibition, Vackar proposes an image of what makes a work of art: a man, a worker sculpts his self-portrait and is filmed by the artist while working. A dividing-in-two, which is again the materialization of an alteration, because it seems that for Vackar it is by inscribing in the fact itself - by its repetition (News Dispersed), its limits (Towards the End), its violence (Slap) - that one can invent this little difference, this little parcel of time, which saves the real from itself and produces this slight trembling, this delicate cloud of meaning, irreducible to the order of things.

In the project Main d'œuvre artist invited a worker to an academy of fine arts to make his own self-portrait in clay. Project was inspired by the situation in the fifties under the communist regime in Czechoslovakia, where as a part of the communist utopia, workers were invited to make and teach art at the art schools. Artist works with the ambiguity of the time replacement; the once ideologic utopian project was replaced by the economy of art: artists makes the worker to work for him and presents the entire worker's working process as his own work.

Daily news headlines were written in gray powder on a zebra crossing early in the morning. They were dispersed and erased by passing cars and people during the day. The video, created by making stills every ten seconds, captures the whole process from morning to evening.

The artist had himself beaten several times by the anonymous person behind the camera. Every slap sent an ephemeral cloud of white powder into the air. The scene was repeated several times, with each slap slightly different from the other.

intervention in a public space in Argentina, video
edition 5 + 2 ap

A site-specific drawing on the last road to the 'End of the World', at the southernmost place on Earth, Ushuaia, Argentina. The idea of the intervention at the End of the World was inspired by Francis Fukuyama's The End of History and the Last Man, illustrating the relation between end of utopia and artistic intervention, considered as a utopia itself. 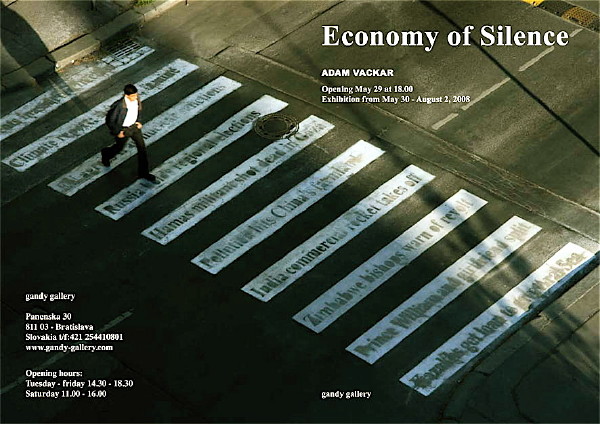 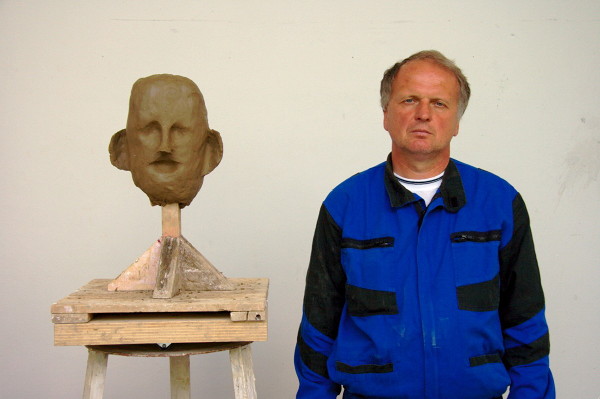 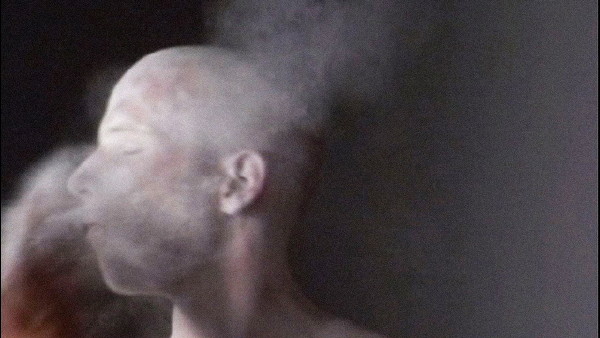 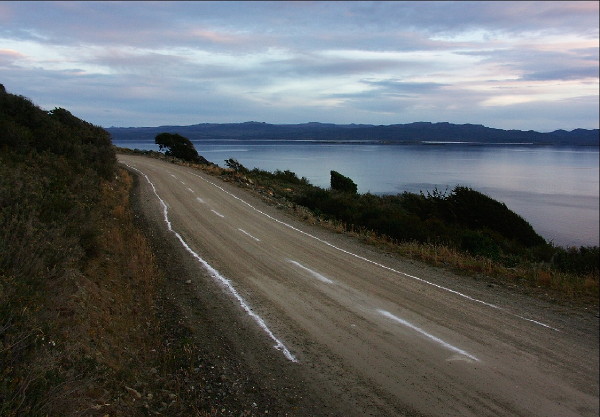