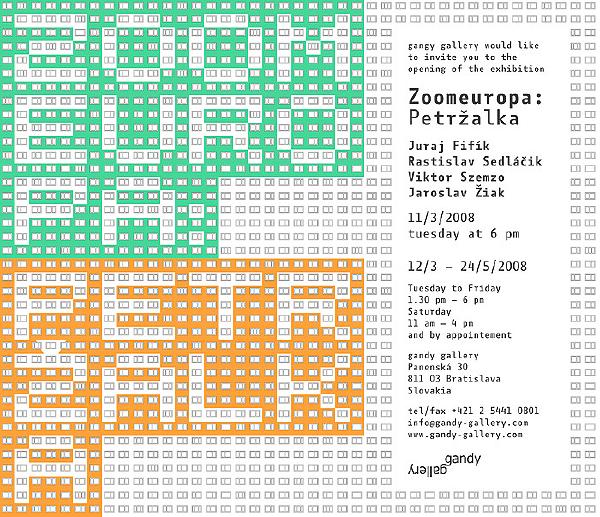 Not Yesterday, Not Today

For a long time before I got lost in the new districts of Petrzalka, I had family houses with gardens, local cinema and "U Bergera" pub with the uniquely suburban atmosphere and lying close roads in the memory. With the new construction activity in Petrzalka and building of the New Bridge hang also the disposal of the Rybné Square and a large urban area below the Bratislava castle. The city fathers at that time had realized no relationship to historical or modern architecture and have executed their schematic dream of a "designers of the communistic society" environment. But the life changes, is beautiful in its diversity. We do not want to be manipulated; we do not want to be alike. Not yesterday, not today. During the encounter with the gallery owner Ms. Nadine Gandy we have talked about the dangers of losing the historical and cultural memory in the "Information age" of today's predominantly commercially oriented world. The ever-present consumption and profit ideology became the program of the pragmatic technocrats who appoint themselves on the “Invisible hand of market" and positive economic and technical results. If the Slovak kind of globalisation has its shadows as well, we should talk about them more. In particular we should talk about the higher quality of life, stronger support of valuable art activity, culture and national activity. There are countries, France for example, that have enough defensive matters to protect their own cultural and national identity and to evolve empathy, tolerance and become acquainted with the culture of other nations. In connection with this exhibition we will recall a less known fact that in the season before the World War II Petrzalka became a part of the German Empire. Adolf Hitler, while standing on the right bank of the Danube river, was holding filed glasses and watching the statue of a lion with the Czechoslovak nationhood sing on the Bratislava embankment said: "The cat must down". It was in the time when Hitler in cooperation with many countries began to realize his idea of the "New Europe". Munich betrayal, occupied Austria and Sudeten German, The Protectorate of Bohemia and Moravia and the First Slovak State ripped off of its southern territory – these were the first steps to a new world ordering. Also the Petrzalka affiliation to the Nazi Germany was one of the results. After the end of World War II it was forbidden to speak German or Hungarian in the streets. Afterwards we lived our isolated life behind an Iron Curtain, in the middle of Europe. Apropos the slab blocks in Petrzalka were perceived by the communistic officials as symbol of the victory of socialism. On the other hand the eruptive construction in Petrzalka solved the most serious housing problems of the citizens of Bratislava. The last words should have been probably written by someone who lives in Petrzalka and knows its present image better or by someone who has critical exceptions and would like to humanize this big urban settlement. I think the organizers and authors of this exhibition attempted this.

* Director and a Scriptwriter "Pictures of the Old World", 1972. Professor at the Faculty of Film and Television, The Academy of Music and Performing Arts, Bratislava. 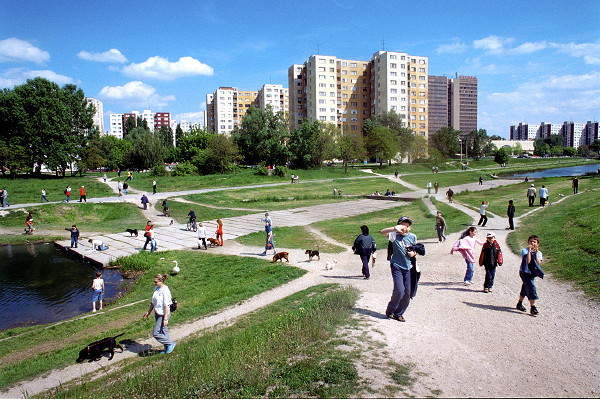 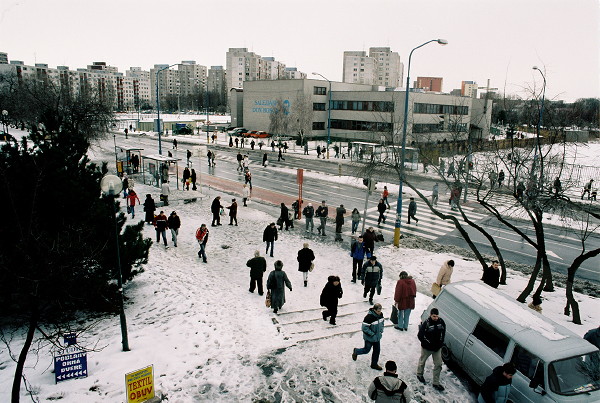 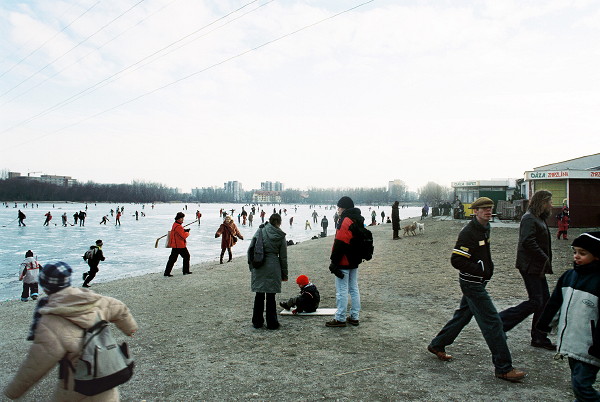 A series of photographs is a certain un/real picture of the largest, and perhaps most well-known Bratislava housing estate - Petrzalka. Out of an unsuccessful intention of architects to create a happy uniform home for thousands of inhabitants of the capital there arose a so-called "sleeping housing estate", housing estate in which, provided you are lucky, you encounter someone in the early morning and afternoon hours on the way from, or to the work. Thus reality can strike an uninvolved viewer only on the first sight. In fact, compositions are manipulated by the author. As far as a technical side is concerned, particular photographs often came into being during an interval of several hours, with the help of certain "time collection" and a subsequent digital post-composing. These photographs can be perceived also as an allusion to Barocco paintings where on the one hand multiplied figures form a compact whole, but on the other hand their very positions are really absurd. 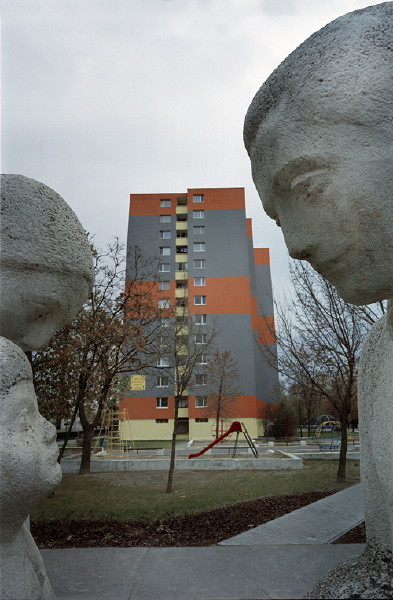 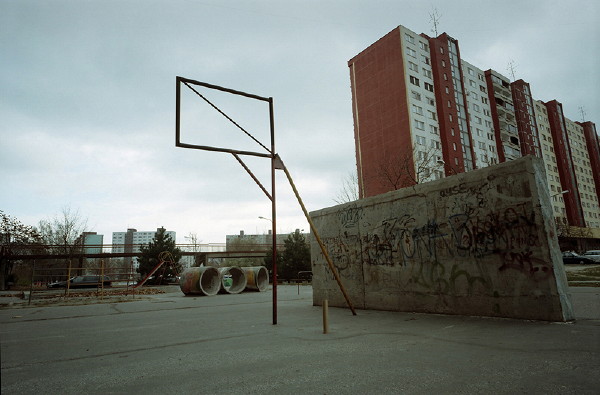 Since 2005 I have been photographing my project titled playstation.sk. My intention is to document children's playgrounds in diverse localities of Slovakia, in different relationships between the human and the neighbourhood. Many playgrounds are heritages from the previous era - forgotten and condemned to decay. Together with bizarre Petrzalka they have established an obscure complement of Petrzalka's architecture. I started my project just in the Petrzalka housing development which I have known for many years. I have considered the relationships of playgrounds as an elementary raising point in concept of my project. Definitely, the playground plays an important role in the life of the human. My intention is to document the current conditions of playgrounds not only in Petrzalka, but also in diverse regions of Slovakia. I have been following the conditions of playgrounds, their relationships between to the human and the neighbourhood. As interesting appears the metamorphosis of the original functions of playground organism from the datum of play into a datum of non-significance and deadness. Through the title of my project Play Station Sk, I try to express the process of metamorphosis of the actual world into the imaginary world of computer games or other interests. It is evident that the mass use of playgrounds became the past. The original playground gets a new face, reflecting the way of use. I want to focus in my photographs on the relationships between the human and the playground, seeking for invisible, absurd situations of relationships.  My intention is to map the condition of the playground in relation between the town and the village, the large town and the small town, or the town centre and the satellite area. 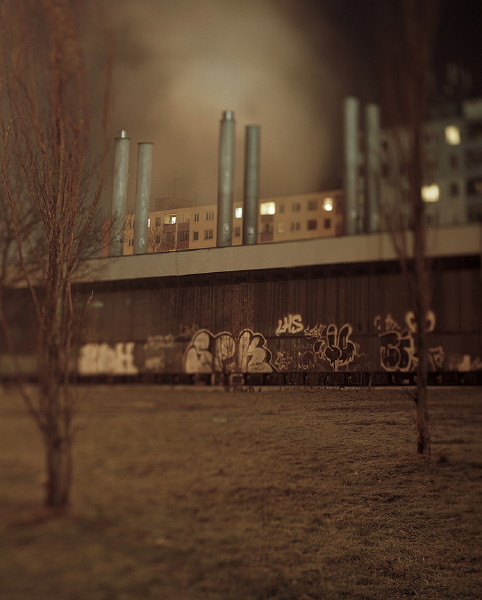 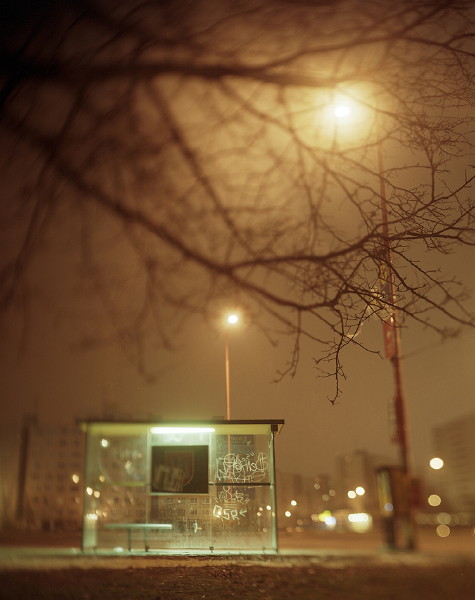 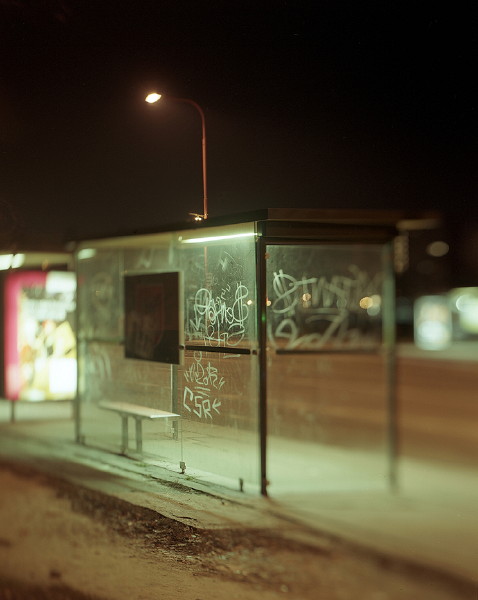 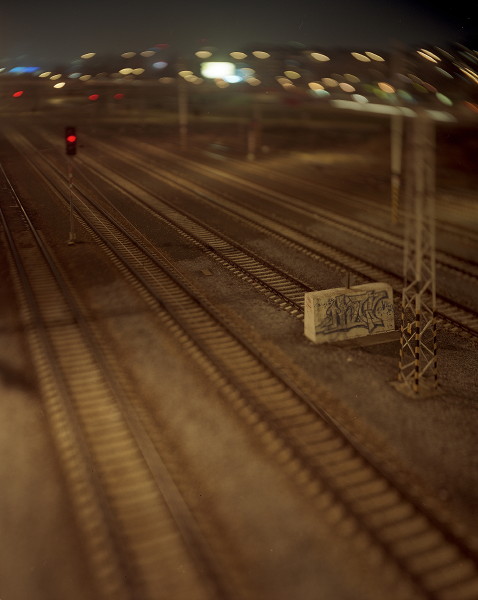 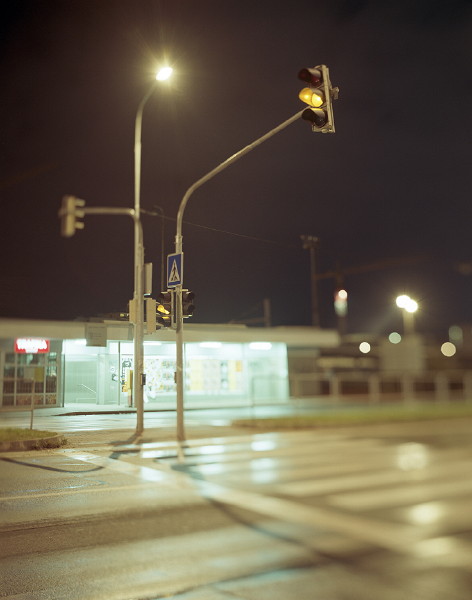 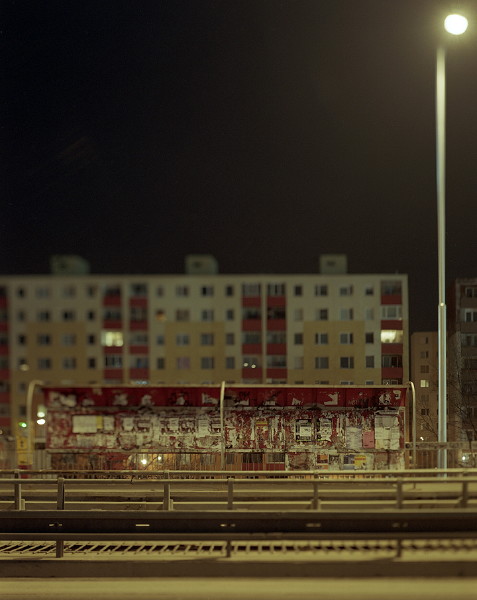 Petrzalka is "City in a city". It has it's own rules and local differences. I'm always surprised to hear people fear to come in at night. It was some time ago that this place had the highest concentration of crime in the country. I live in Petrzalka since I was born and I don't find it unsafe to take walk at midnight. I find this "city" fascinating when it sleeps. It's empty streets tells stories about people who walk them every day. It's walls are canvas for the creatures of the night. This place bears the heritage of socialism at its apex, but still is a place to live in. Not much tourists come to visit this "city" at night. But its true spirit comes out with the first street lights. The grey panel fancies within the light of many tones, creating illusion of mock-up still arts. Documenting not only the way of living, in big concrete boxes, but also, the environment refilling the atmosphere of this place as a utopian idea designed without taking accent on the man. Local color is represented by right angles and folk incarnate by graffiti. 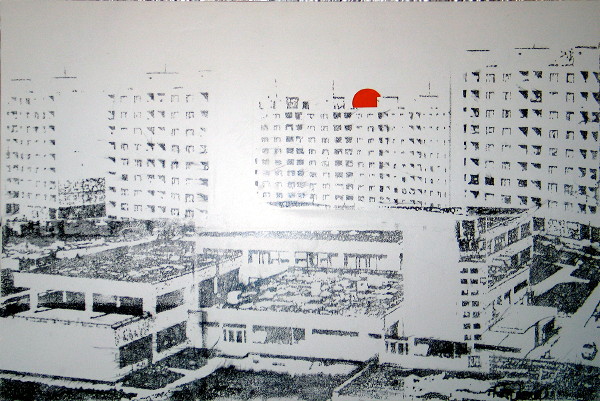 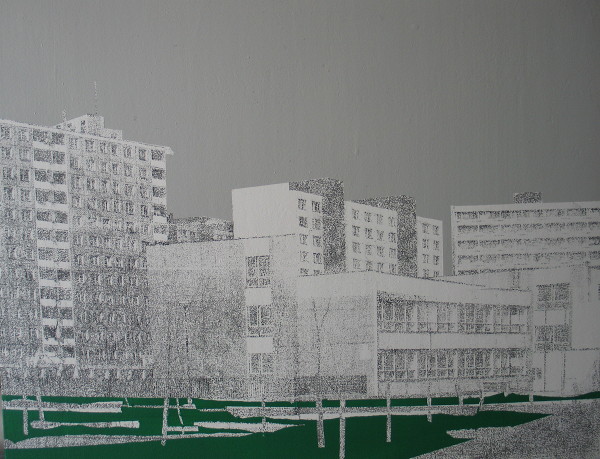 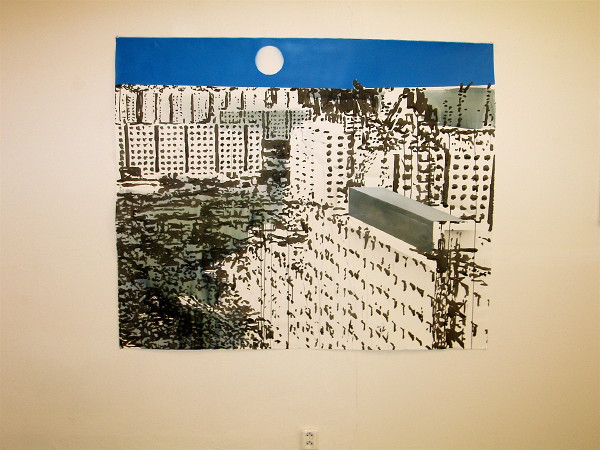 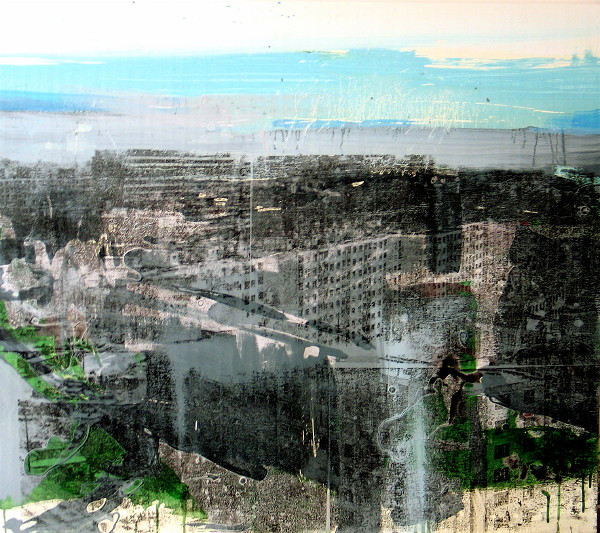 The predominant distinctive feature of Rastislav Sedlacik's paintings is space. Concrete but also fictive, demarcated even open, but principally inspired by everyday reality and civilian environment.  One side of Sedlacik creation, intent interest in the urban surrounding is documented in an open cycles Petrzalka (since 2005), in which author themetizes one of the Bratislava biggest housing estates constructed in the Seventies and Eighties of the 20th century. The fundament of this painting series are black and white newspaper reproduction of the housing development, which author transfers onto a wooden base, sporadically on canvas. By means of a specific authorial technique, when imprinting monochrome graphic model on a wooden foundation the obvious outlines of depicted objects and street blocks fade away, while the prevailing grey scale creates and accentuates the atmosphere of anonymity and unification so characteristic of this type of habitation.  Declining reality evokes flashbacks, reminiscence, recalling, or just conversely forgetting, the stories that we want to put out of mind. This layer is further complemented and confronted with bold painterly interventions, which are in wide scale from spontaneous gesture (Day) to a concrete symbolism as in the reiterated Sun motif works Sunset and Cloud. Although this contrast accentuates on one side the grayness of the neighborhood on the other hand it astonishes with different, often surreal sight of Bratislava's "ghetto", in particular considering hand motif pictures (Hand). These intervensions either cover significant area, or form their appearance as minimal details which in spite of their size create adequate contrast to the first plan of the painting.  It is interesting that the titles of the Petrzalka cycle, similarly as the majority of Sedlacik works are presented in English. This could suggest another paradox. English symbolizes western civilization, while the socialistic housing estate particular eastern phenomenon. One of the potential interpretations is that it is the foreign language, (not regarding its command) which evokes something what is present in these paintings. A sensation of unknown, anonymous or abstract is comparable with the desolation premonition or rather void, which author introduces in his works.  The author lives and works in Bratislava - Petrzalka. He graduated in 4th. Atelier of Prof. Ivan Csudai in 2004 and finished his studies by cycle of paintings called Crossover in Academy of Fine Arts and Design in Bratislava. Since 2007 he acts as a postgraduate student in 4th. Atelier at the department of painting and other media.