ZBYNĚK BALADRÁN
Born in 1973 in Prague

is an author, visual artist and curator. He studied art history at the Charles University Philosophical Faculty in Prague from 1992-1996, and from 1997-2003 at the Prague Academy of Fine Arts in the studio of visual communication. He is one of the co-founders and a curator of Galerie display, which was established in Prague in 2001, and in 2007 merged with tranzit.cz into tranzitdisplay, where he continues to oversee the exhibition program. He is also the co-curator, with Vít Havranek, of the project and exhibitions Monument to Transformation, a 3-year research project on social transformation that was presented in 2009 at the Prague City Gallery, and which will travel to several other locations in Europe later this year. Baladrán is also a part of the team of curators (Alexandria Contemporary Arts Forum, Chamber of Public Secrets, and tranzit.org) for Manifesta 8, which will be held in Murcia, Spain in 2010. 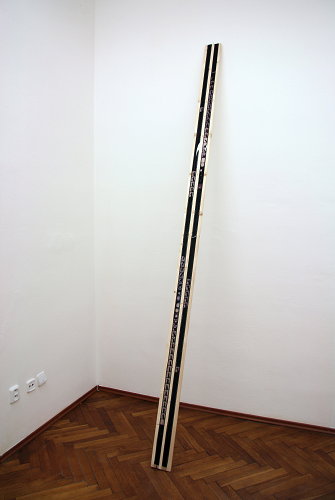 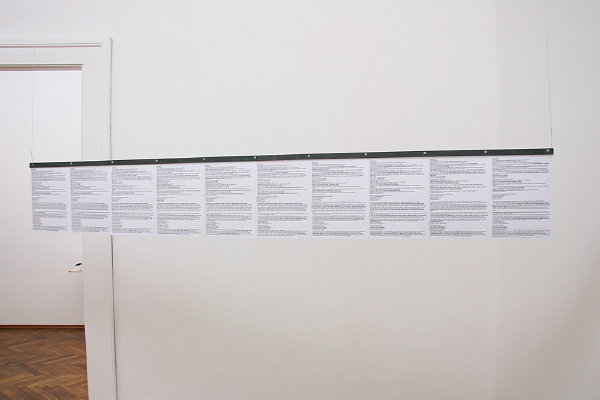 DENISA LEHOCKÁ
Born in 1971 in Trenčín
lives in Bratislava, SK
deals with questions of intimacy, femininity, family (pedigree) and other nets through diary like intuitive drawings / paintings which consequently play crucial roles in further very extensive installations. So reading of her works is possible only in direction from fragment to entirety. Her vocabulary is built by fundamental elements like streams, roots and branches, plates, vases and other vessels, fruits and plants, chairs and tables, lakes and islands, lines, circles, dots, spots and crystals in conjunction of gesture and geometry. Lehocká stays obviously speechless, never commenting her works which obviously, as well, stay Untitled. 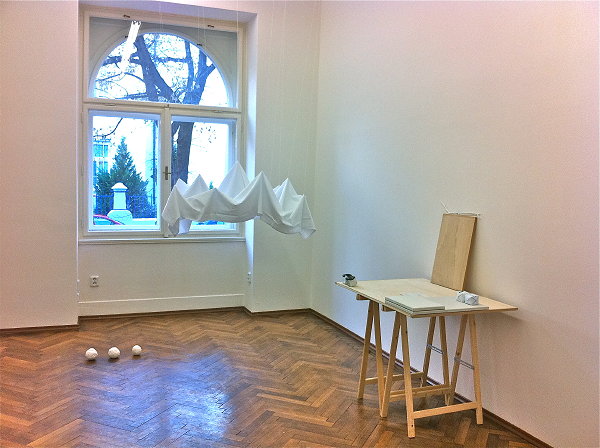 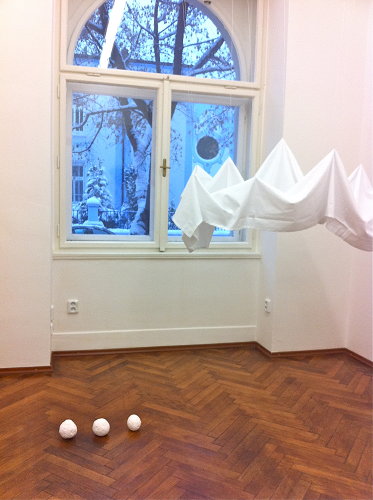 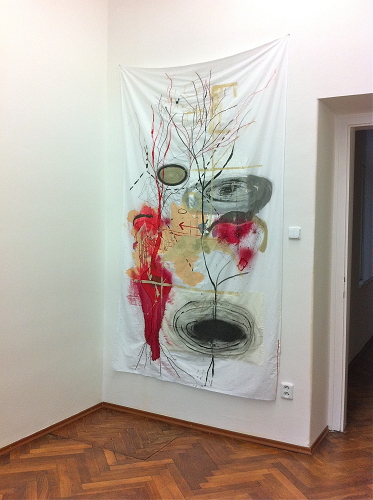 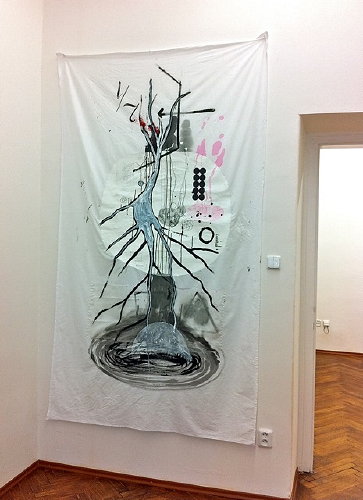 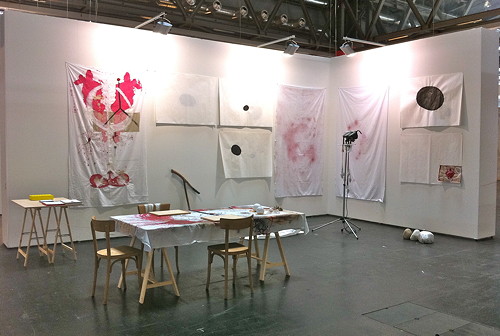 ADAM VACKAR
Born in 1979
lives and works in Prague, CZ

He has studied at Academy of Visual Arts in Prague, graduated at Ecole Nationale Superieure des Beaux-arts in Paris and has absolved artist-in-residence program in Palais de Tokyo. His work was presented in diverse international exhibitions such as in Centre Pompidou, Palais de Tokyo, MALBA Buenos-Aires, Bucharest Triennial, Prague Triennial, City Gallery Prague and others.

ACTED TIME
2010,Lambda print on matte photo paper
80 x 120 cm
The acted ephemeral gesture is physically marking the invisible presence of the passing of time: as in a possible science fiction where someone has taken the pill for invisibility and had accidentally soaked his steps into a white paint.

AN INTERIM ALPHABET
2010, pencil and dirt on paper
30 x 40 cm
Art academy exercises consist among others of writing letters. These are written in dirt, the symbolical matter of ephemerality and transitivity.

DEGREES OF GREY
2010, vintage glass photographic filters
60 x 40 cm
Black and white filters are supposed to adjust and filter the real imagery - the usage of details and descriptions in order to create a adjusted sensory experience for the reader. With different degrees of density they become a possibly symbolic tool of adjusted understanding of the real image.

SONATA FOR 6.35 MM
2010, music score paper penetrated by 6.35 mm caliber pistol bullets, plexiglass box
60 x 80 cm
Sonata for 6.35 mm joins diametrically opposed things: music and war, virtue and brutality, life and death, perpetuity and iniquity. The bullets create perfectly aleatory music composed by a gun.
It joins also two opposed streams of tradition in my own genealogy.
First of my grandfathers was famed classical music composer while the other was a renowned army general. These two wholly antagonistic ways of understanding the world are joined in this very work.

FLAG OF THE WORLD (After Braco Dimitrievic)
2010, white flag, dirt, aluminum tube
320 x 220 cm
At the beginning the white flag was left on the street to be walked upon by passing people. Opposed to the work by Braco Dimitrievic, who's flag piece was cheerful and colorful, this very flag takes what there is on the bottom of the reality. Footsteps mark the presence of time by collective (even passive) participation by casual passers-by. 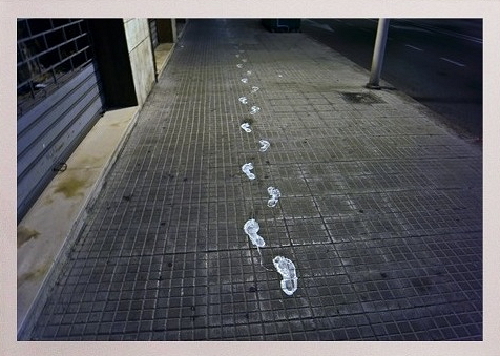 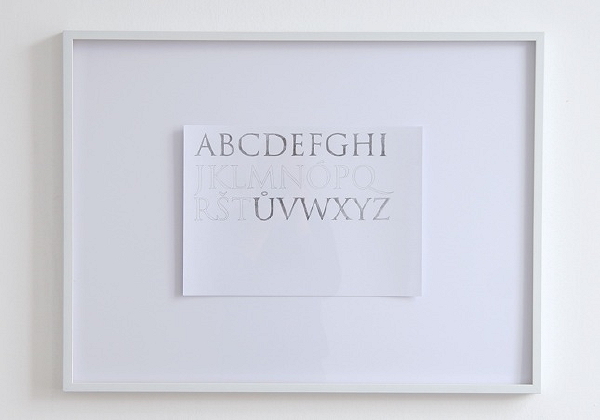 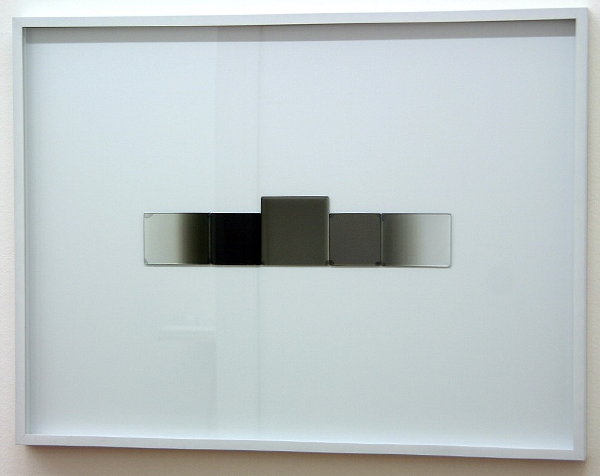 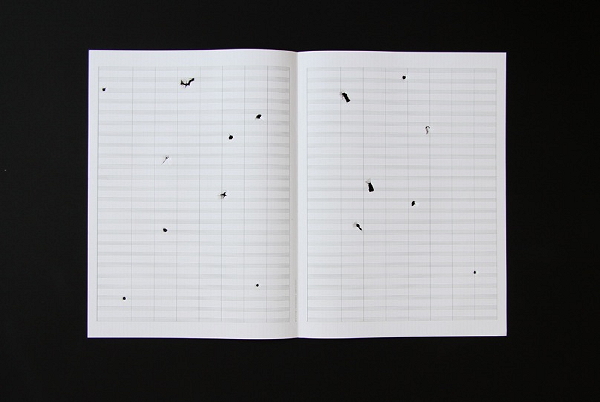 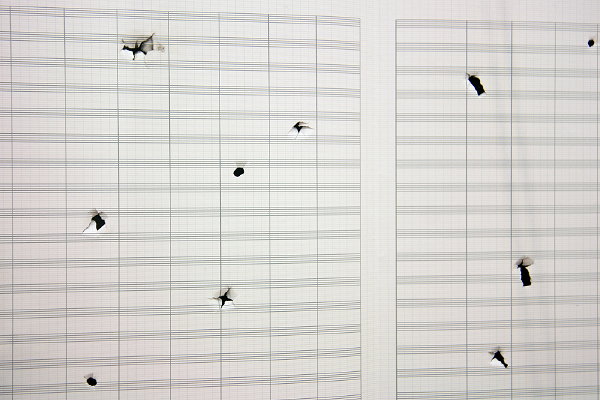 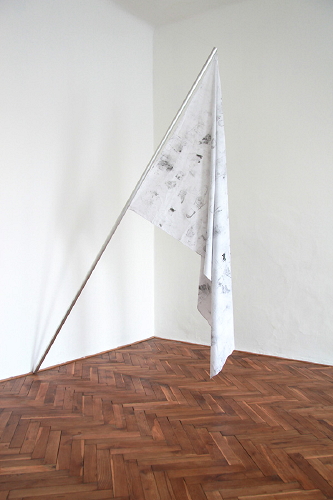 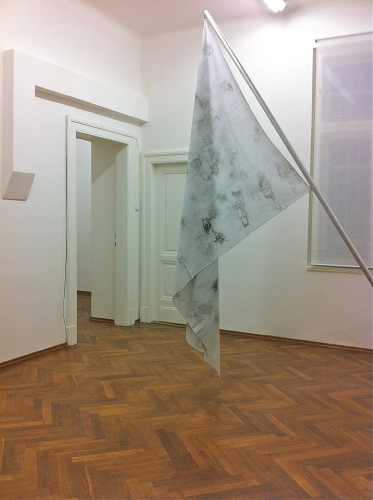 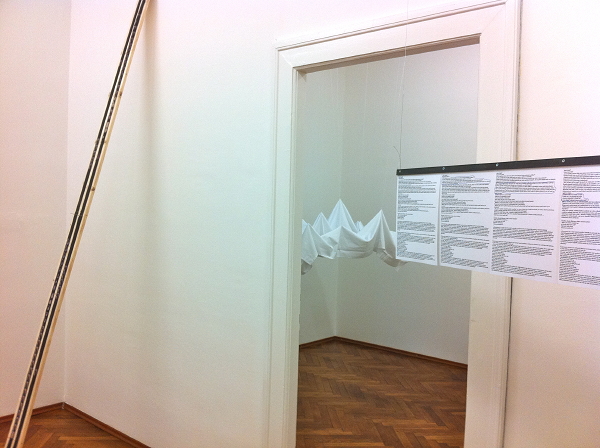 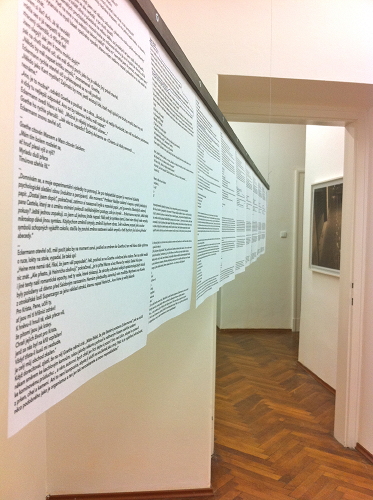