The system doesn't contain our hearts

This exhibition presents for the first time new sculpture and drawings works realized in Budapest in 2011/12 . Roza El-Hassan was born in Budapest in 1966, of Hungarian and Syrian origin. Is one of the most prominent representatives of contemporary Hungarian and Central European art.

Over the past twenty years, the artist's drawings, objects, installations, and actions have fostered international renown. She studied at the Hungarian Art Academy, Städelschule, Frankfurt.
Solo shows include exhibitions at the Műcsarnok Palace, Budapest; Drawing Center, New York; Secession,Wien and currently a solo exhibition in Kunstmuseum Basel.

I have to apologize, since the monk and two ducks with long explanation. Since I have no short key for the interpetation, I write these diary lines hoping to find a reader, who can write a better and shorter explanation.

2010
The eyes of the two ducks are on one perfect vertical axis, one by one.
I tried to paint the photo of two ducks taken by Salam Haddad for weeks and months. The composition was fascinating unique and unbearable at the same time.
Two eyes should belong to one being on an image and they should be on a horizontal axis.
Here everything is different, it is no cubist compositon, all is realistic, normal, but still breaking our habit of perception. The composition of this photo gave me very little freedom to paint: for my failures my rythm and games. Two eyes, one glance, but belonging to two beings, and being on a vertical axis still forming a perfect space.
There was no space for my failures. for my enigma. Finally I gave up, drilled two ugly holes in the canvas poored gold in the holes and took my probabyl worst painting ever done, to the Budapest Zoo... to an exhibtion on animals. That was october, 2010. But the initial photo was taken even earlier, 2008 on an island, near Stockholm.
The inspiration for the painting's style with gold and bright colors, I took from a room of syrian upper- class-dining-room in Banyas city, the merchant's family splenderous huge arab saloon kept in chinise style. To be honest, I wanted to paint for them silently hoping to break in in syrian market creating arab style painting with a chinese touch.

2011, octobre Sunday morning
a friend, Csaba Dalmady uploads a video by Eckhart Tolle on facebook. At the beginning I hate it, how can Tolle combine retrorics of Kiergegard, Jaspers, Heidegger, Buddhism, pshychology and esotheric magazins in such a shameless way in his teachings? He speaks above all in understandable way… since years I argue with my friend. This morning he speaks about the body of pain in us, which we have to obsere in a calm way to to loose his destructive guidance and obtain energy of life out of it.
It makes me somehow so calm. "No resistance no fight " - writes, let things go - observe them comments my friend.
Sitting in front of my computer, I switch a bit to Zizek's speach on a Wall Street demo to escape from Tolle new age guru to well known field of rationalism… to feel safe in Zizek's well known discourse and leftist retorics.

2011 octobre. sunday 11 o clock
A curator or gallerist calls. Ahe needs one further work for the show next day on monday morning. what I delivered already is not good enough . No resistance, no fight… nomatter wether Sunday or not, I go to the little workshop, the garage in my parent's, house and start to continue working with the little wooden figure. The edges were stilll to sharp. the figure looks sad with bad concious, someone, a man, a muslim marriage, was waiting for me on this Sunday. Invain, there is something what seems much more important fo me. The object became like a magnet, I know. Once again, I will not marry, the man waits, but I cannot leave the work. Maybe I succeed to finish to object. The little wooden object with animal-like face, the monk is so sad.
I turn around in the garage and see the two bright and golden duck's one eyes observing me, suddenly they don't look anymore like kitsch, they look wise like bright music or prayer. I mount the monk on the painting: and here it is, the big misstake, the ugly little rational monk with bad conciuos, which creates an enigmatic whole with two bright golden one-eyed ducks.

The French word "Le Voyant" is used in English for somebody who can see past, future and present.
The situation of the world seems so unpredictable - our tools of analysis have seemingly lost sharpness. Systems change rapidly. In 1971 Noam Chomsky and Michel Foucault, two great thinkers of 20th century were debating on Human Nature and its possibility to change the social systems.

While Chomsky fights for the absolute moral necessity of social change and revolution, Foucault is deeply pessimistic and argues the inevitable reestablishment of similar relations of power, whether or not revolutions occur - the structures of power are deeply imprinted in our soul and institutions shaping the system.

Being a cyberfreak, I would argue that the counter-argument of Foucault's dark realism is to be found in the endless flow of my e-mail correspondence. One of my friends, Csaba Dalmady writes: "The System doesn't contain our Hearts" - he comments on "Extasy" an essay by the great shunned hungarian writer from the last century Béla Hamvas.

Soul is part of a series of demonstration objects.
2011 I made a series of drawings of demonstration objects within the work titled "R. thinking /dreaming about overpopulation".
First at all it is about the unbearable tragedy of all syrienne people, independent from their religious and ethnic background, - independent from the fact, wether they are christian, sunni, or alewit muslims, men or women, old or young.
It is about a human tragedy and about the deep collective desire for freedom and fight against repression.
The objects were made in Budapest, in my silent studio,
It is also an inner talk examining the feeling of respression.
Repression can be a political repression, injustice. When you are not aloud to talk loud or tell your thoughts, talk against injustive,
Repression can be also a repression of desire in the broadest sence.
Agressiv repression of regimes tries to erase desire and loud voices by violence and by death.

As a subject we can examine wether it is reasonable to calm down the voice of our desires in Brecht's sence , dealing with them and observing them like little objects, wich are not necceserarly part of our Self or Ego, or as islamic Dgehad, the fire to purifing our souls ( not the politcal label in main stream media against muslims) and also popular guru Eckhart Tolle or Buddha and all the atheist pshychatrist - they are so different - still they teache us someting simular.

All these teacher's tell us to be able to observe our desires and to be able to examine their value them from distance, like objects. This is the condition of inner and social peace.

While the work Monk might be a pamphlet on the colliding and merging ideologies, the series of drawing, which came into being in autumn 2011 is a very subjective work..
All I know is, that Dóra Hegyi, a very intellectual and radical curator from Budapest asked me to start a work on the topic of arab spring. There was so much suffering in Syria,that I didn't wanted to be confronted with that.Still I started to draw, I knew, she was right, it is not the right decision not to think about it, not to share people's pain. The balett dancer shows the grace I have in my memories, the notion and taste of beauty in the country of my origins. The smunged forms appear show the cruelty.The woman crying rainbow tears is woman crying rainbow tears. The vertical bars of prison are abstract. Inside and outside the Other - but finally the person appears free.

The art of the arab spring in arab countries is different, it is about activism, blogs, about street theater, poets who die for their songs, who are killed and still the songs survive and people sing them on the streets.
Basivally mine is subjectiv world, maybe not worthy to depict all what happens there or maybe deeply connected with unvisible strings to all.something has to happen to stop bloodshed cruelty,we don't know what. Many arab people say, art is an impotant tool for social changes. But my little drawings they are so far from all this.

The object itself is made without previous drawing or intention… I just started to carve and build the panel - after a while forms and faces apppear and disappear until there's a sudden balance of enegies and shapes.
Still it is symbolizing a demonstration object, since the woodden panel on a stick is portable - portable like many earlier works of mine- the No corruption Bags, or Mobile estate or Overpopulation t-shirts.
"R. thinking /dreaming about overpopulation", a psichonanalitic diary of drawings from the period after 2001 marked by deep inner and outer conflicts of mine: in this series there has been many drawings depicting demo-object: flowers carried on a stick, Duchamp's Fountain or just a pissoir caried on a stick and finally one human lifting and carring the other as demonstration object.
On the drawings from 2003 both human beings were alive, the person who demonstrates, and the other person, being caried as a living demonstration sign. In the year 2001 it didn't occure in my worst nightmares, that so many coffins, dead victims and mourning families would become objects of demonstrations as it happened this year.
This demonstration object carved of wood depicts the crowd, its strength, its desperation but also my imagination and my deep fear of the events in Syria my beloved country of origins which we saw day by day on TV in our living room in Europe. It depicts also mourning and my passivity winter twothousand eleven. 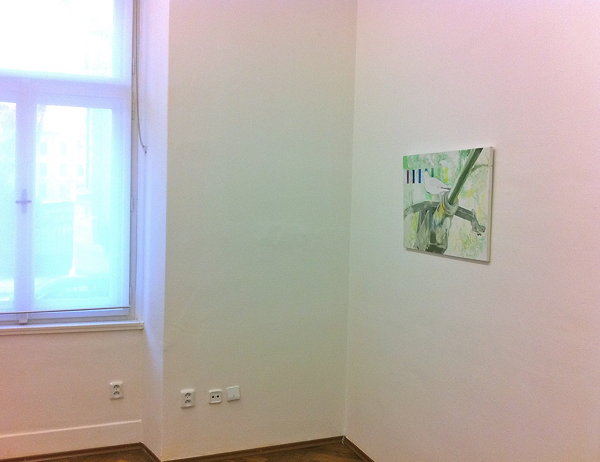 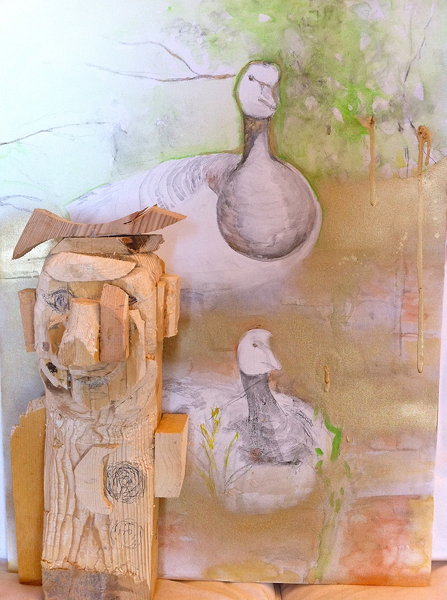 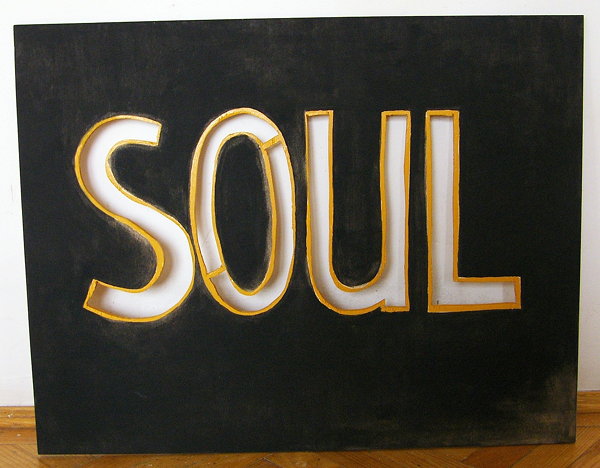 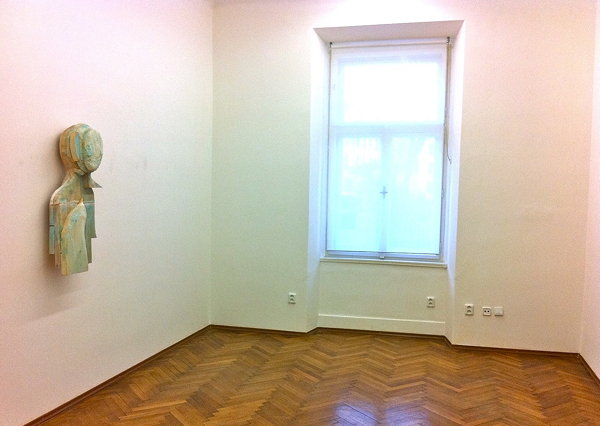 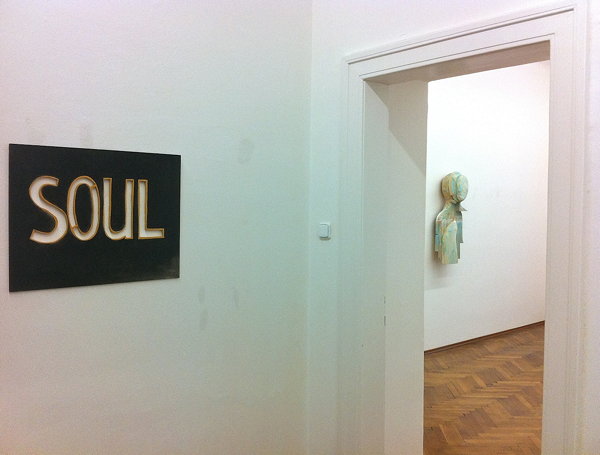 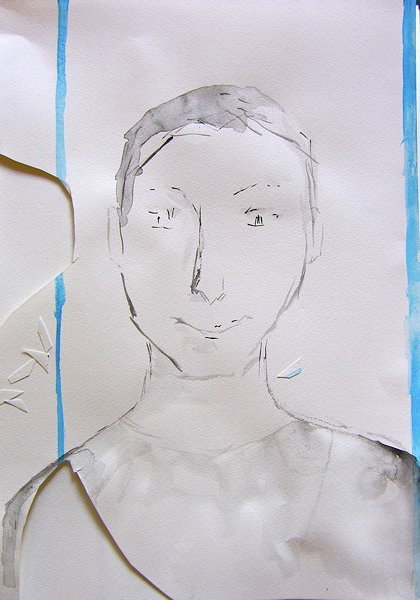 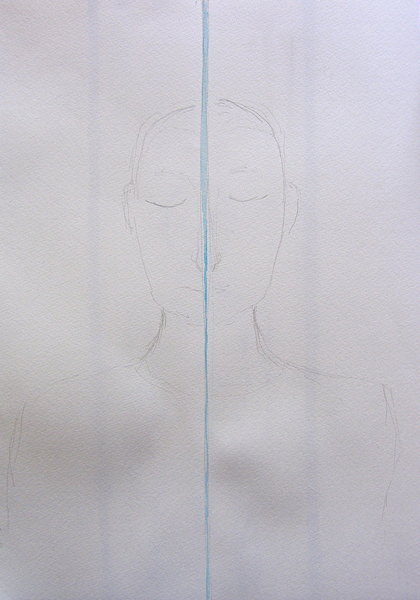 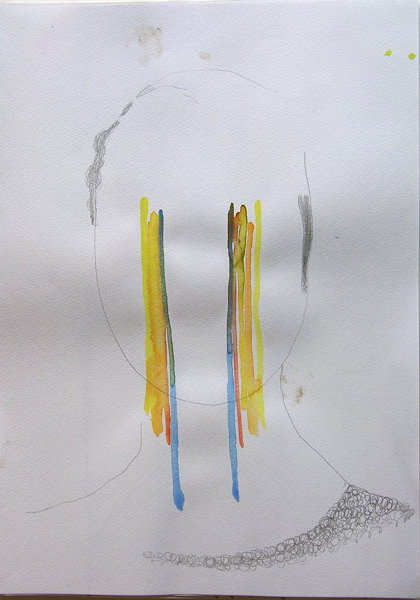 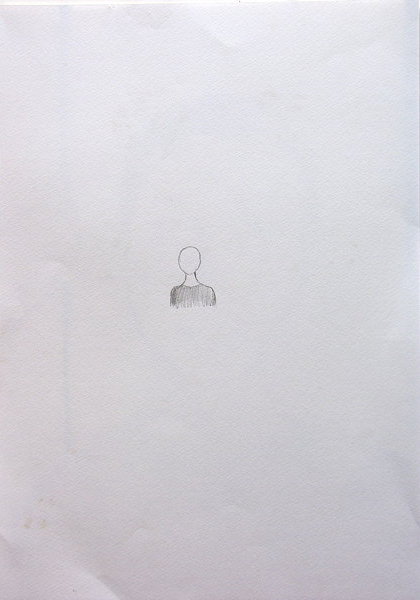 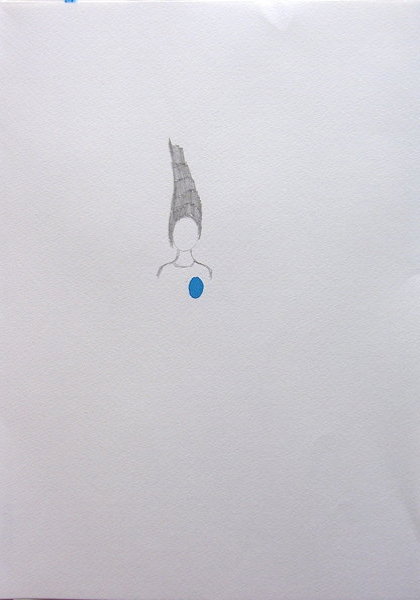 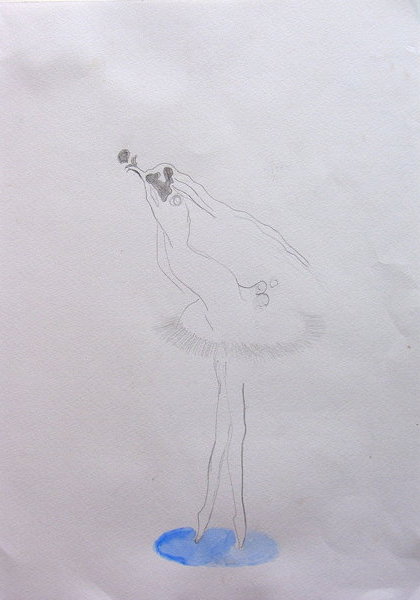 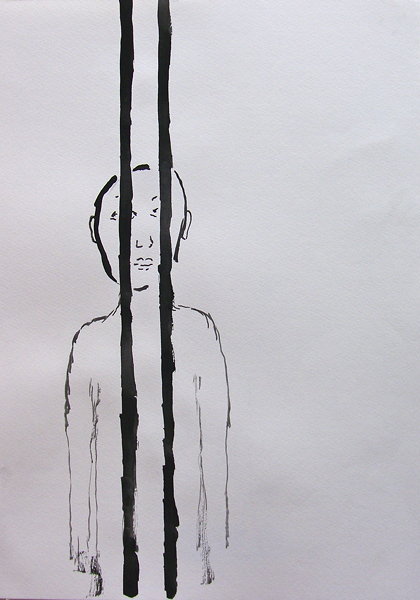 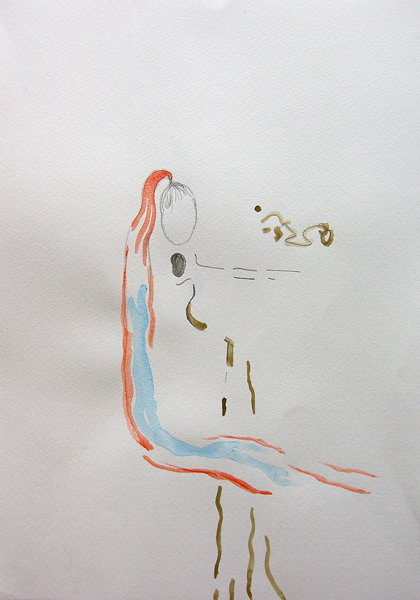 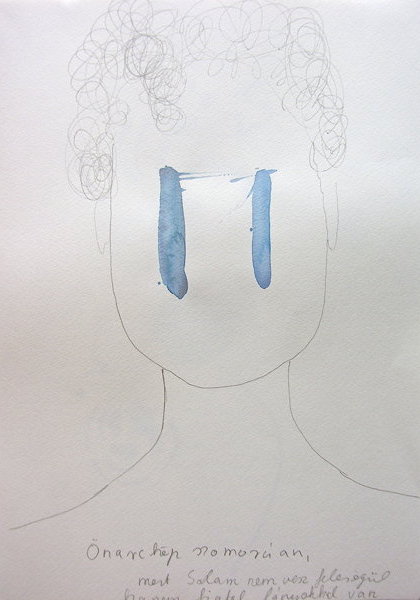 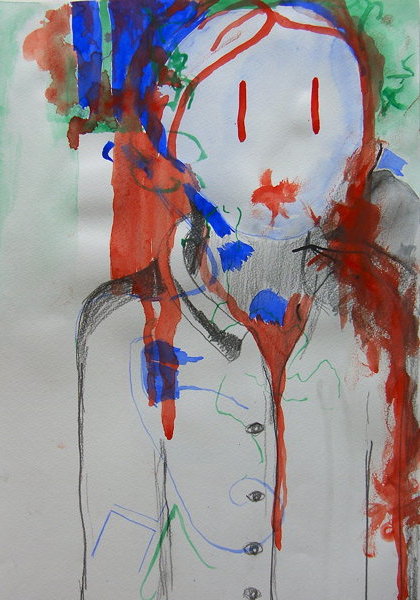 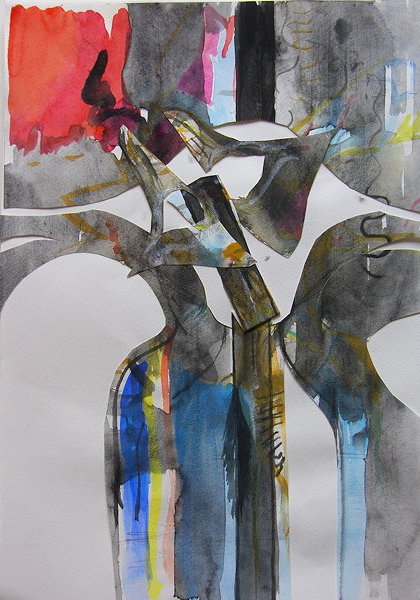 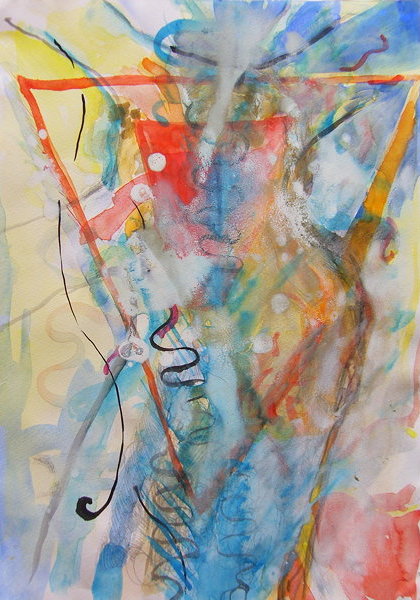 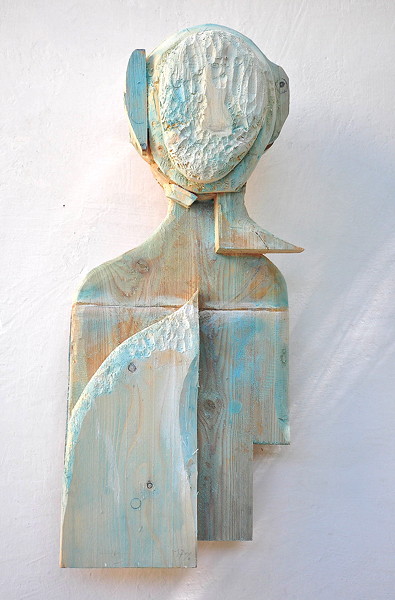