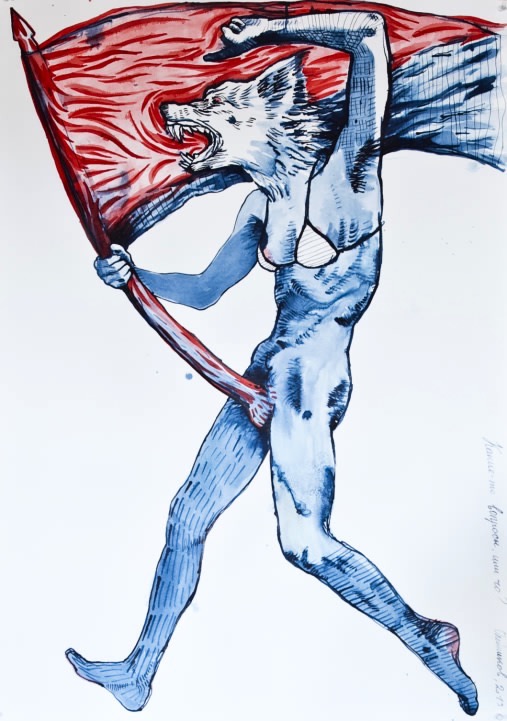 From now on, we claim that hysteria should be considered not as an incidental misfortune of singular individuals in bourgeois society, but as an open possibility and a driving force for the class struggle.
the first thing about hysterical symptom is that it has a certain historical background and refers back to a certain event in the past, a traumatic event, perhaps, deeply forgotten by the hysterical subject. Something deeply forgotten thus nevertheless makes us know about it through a hysterical symptom. Hysteria therefore can be regarded as a kind of memory, an embodied memory, a memory whose subject is a material body of the patient. Hysteria thus presupposes history, and hysterical materialism can take the historical materiality of the hysterical body as its starting point. As Walter Benjamin says, the angel of hysteria looks back at the past, which still needs to be redeemed, and a hysterical symptom as a memory of the forgotten each time reveals a certain crack in the present, where a traumatic event dwells. Only that hysterical will have the gift of fanning the spark of hope in the past who is firmly convinced that even the dead will not be safe from the enemy if he wins.

Oleynikov's part of this significant duo's display features a selection of graphics works which has been included in his recently published book Sex of the Oppressed (Moscow, 2013). This selection of works is eloquent; a collection can be defined as a self-portrait, a synthesis of ideas and interest, dreams and utopias. It is deeply personal. So Oleynikov's Romantic Collection evokes a more intimate dimension, witnessed by the format of the works. Each one is like a refrain; a part of a song that becomes an intimate narration. Using the very intimate medium of hand drawings and ink on paper, Oleynikov brings together personal reactions and intimacy in a very political way, reflecting the dramatic changes recently experienced by Russian society, and more precisely resonating with the so called "anti-gay law" and its possible consequences. A new series of known Oleynikov's textile works made especially for EASTERIA are the flags based on punk-surrealist-like story of the death of Marat. Marat though is represented as a dog-headed androginous beast involved equally in political, creative and sexual actions.

Oleynikov's Romantic Collection evokes a more intimate dimension, witnessed by the format of the works. Each one is like a refrain; a part of a song that becomes an intimate narration. Using the very intimate medium of hand drawings and ink on paper, Oleynikov brings together personal reactions and intimacy in a very political way, reflecting the dramatic changes recently experienced by Russian society, and more precisely resonating with the so called "anti-gay law" and its possible consequences.

BABI BADALOV was born in Lerik(1958), a small town near the Iranian border in the Talysh region of Azerbaijan, to an Azeri father and a Talysh mother. After serving two years in the Soviet Army, he moved to Leningrad (St. Petersburg) in 1980, where he quickly became a leading underground artist and a member of the unofficial artists group TEII.Badalov participated in numerous art shows with the group in Russia and abroad. In the late 1980s, he met artists Vadim Ovchinnikov and Timur Novikov, members of the New Artists Group, and became involved in a variety of their projects and art campaigns.

Badalov always found different ways of expressing his ideas through art objects, paintings, installations and live performances. He also tested himself on the movie set of avant-garde Russian film director Evgeniy Kondratiev.In addition to his visual explorations, Badalov experiments with words and writes obscure poetry, mixing the languages and mentalities of different cultures. Even though Russian is not his first language,he won the Pushkinskaya 10 poetry contest. In 1990, Badalov mysteriously disappeared from the St. Petersburg art scene and became a legendary figure, and an inspiration and a role model for younger generations of Russian artists. Today, Badalov continues to exhibit around the world and develop his new ideas. His latest concept was a series of ecological art objects called Dolls for Adults, where he isolated the plastic of nature inside his own clothes. He is also working on a number of visual projects dedicated to linguistic explorations, questioning how a person can become the victim of a language barrier, trying to untangle the confusion of the Cyrillic/Latin mix. His latest exhibitions are Manifesta 8 in Murcia/Cartagena, Spain, The Watchmen, the Liars, the Dreamers in Le Plateau, Center For Contemporary Art, Paris and Lonely at the Top in MuHKA, Museum of Contemporary Art, Antwerp, "RE-ALIGNED ART" Tromsø Kunstforening, Norway,15 th Jakarta Biennale,and in 2014 "Report on the Construction of a Spaceship Module", New Museum, New York,and a solo exhibition 2010 "My life Report In Paris",Tranzit Display gallery, Prague and 2013 "PORTO - èOPTO" A Certain Lack of Coherence, Porto. 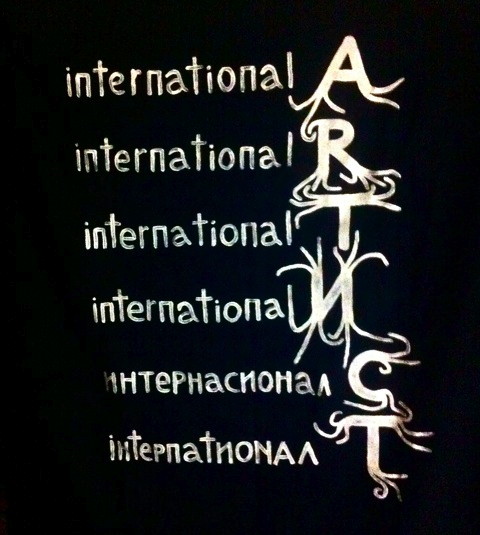 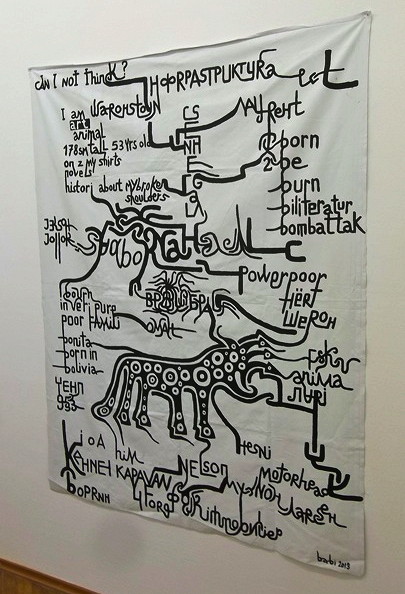 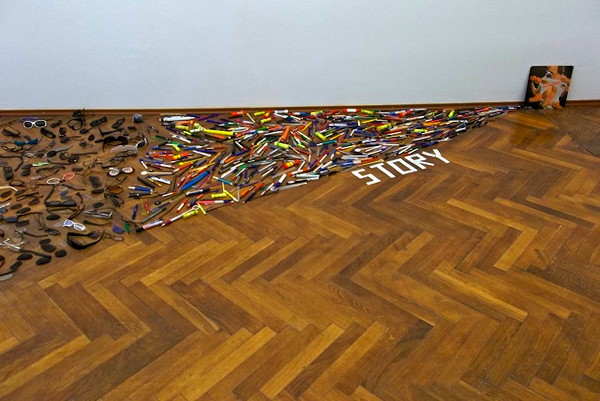 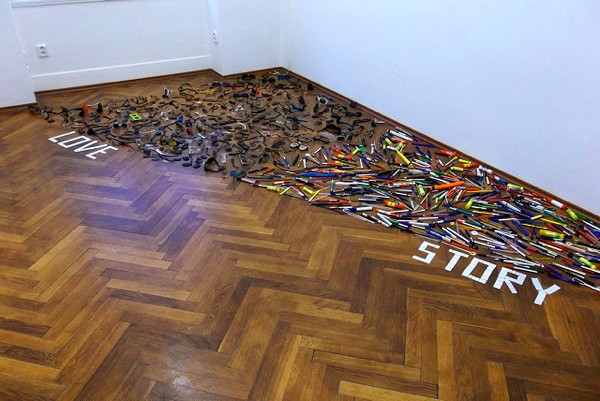 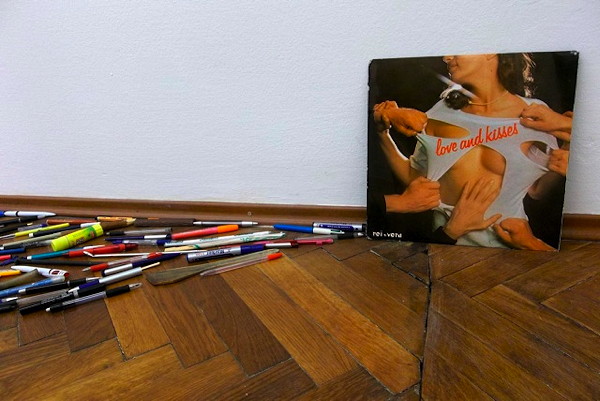 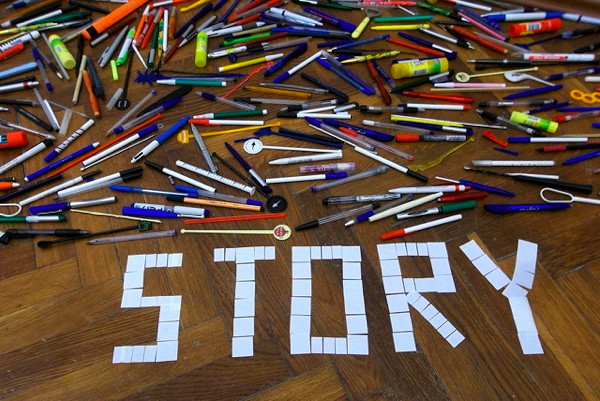 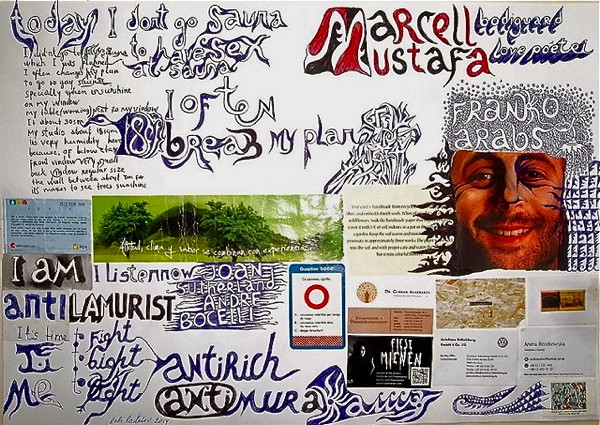 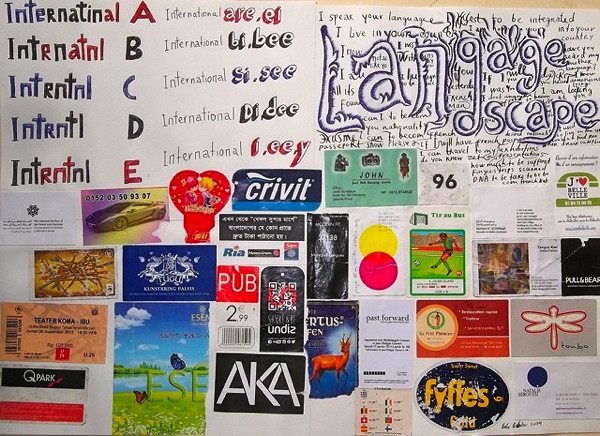 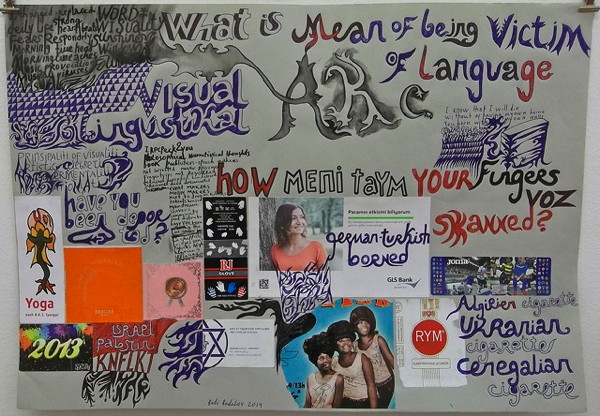 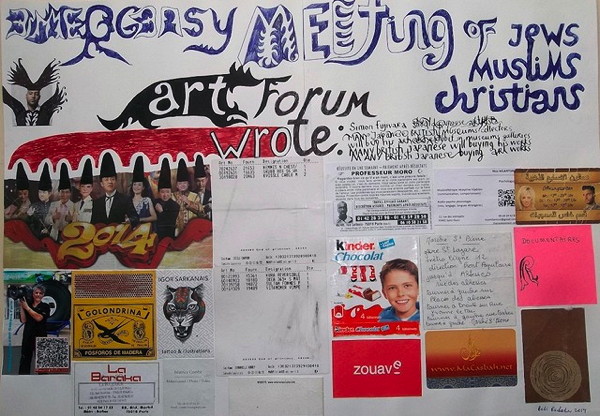 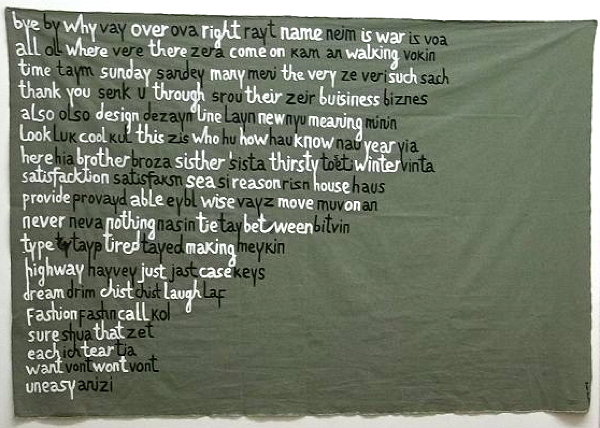 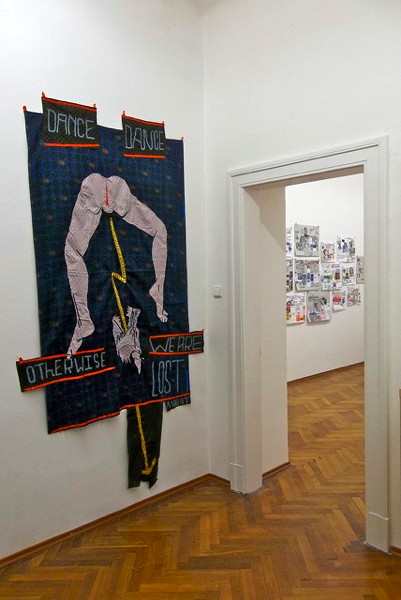 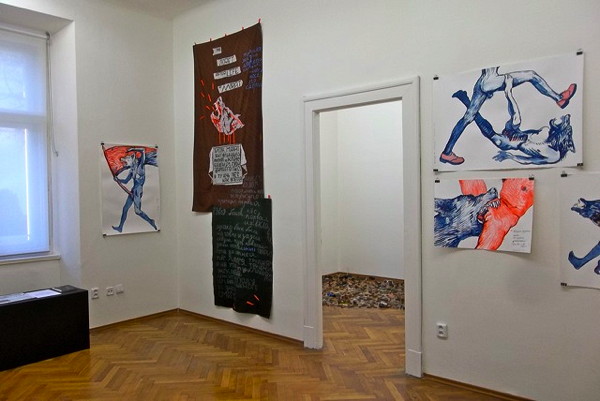 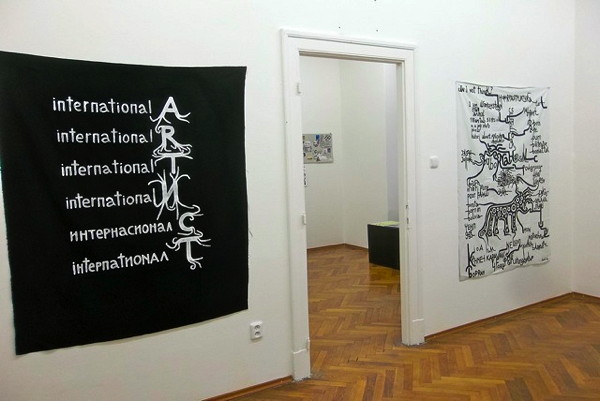 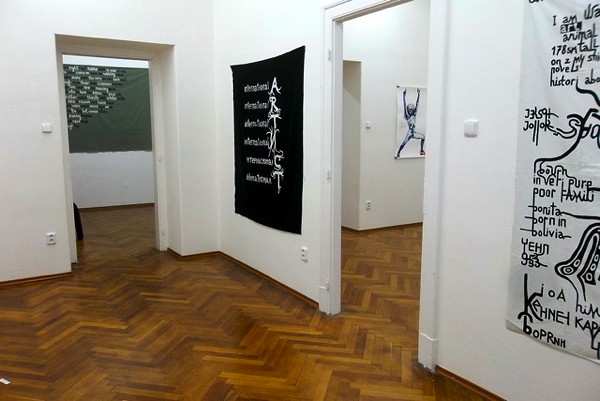 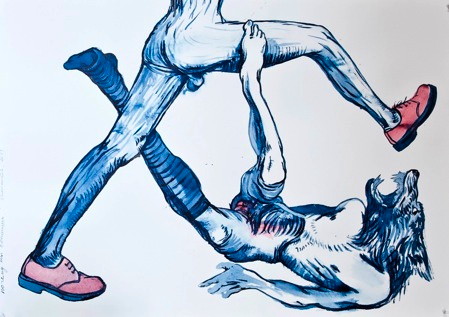 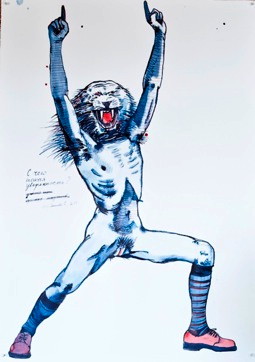 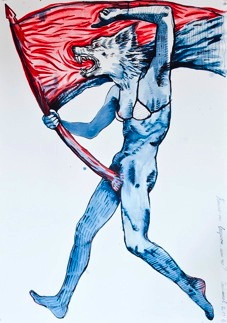 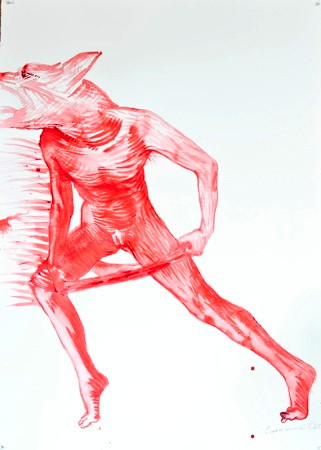 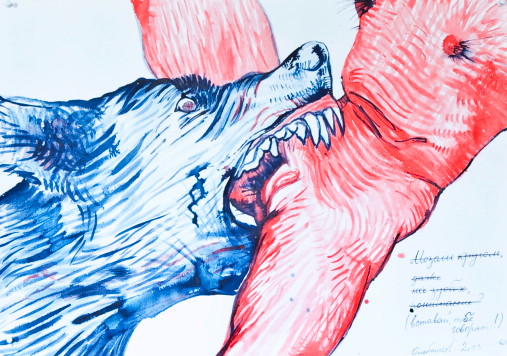 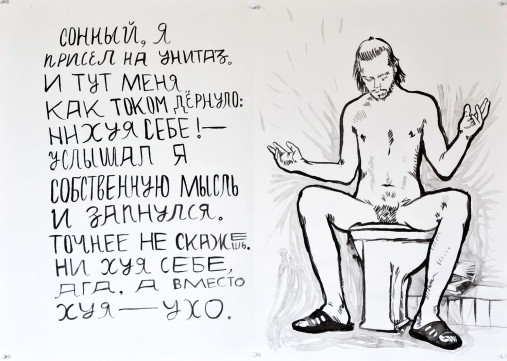 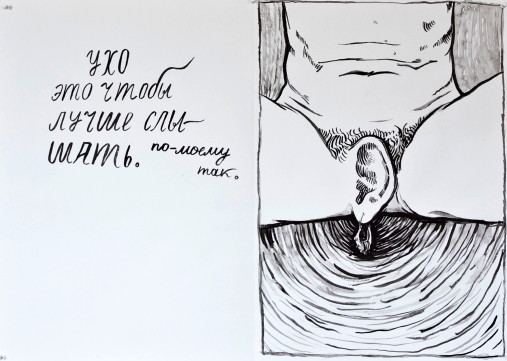 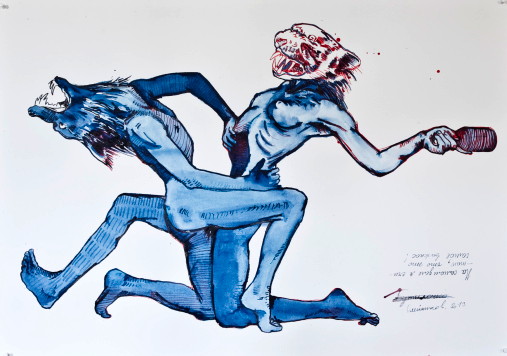 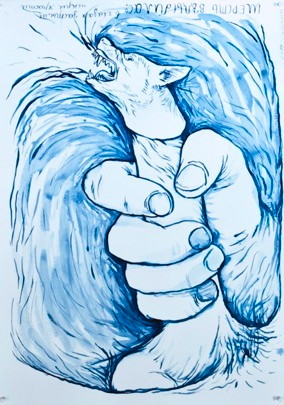 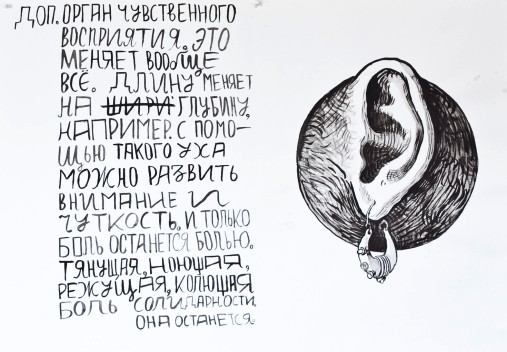 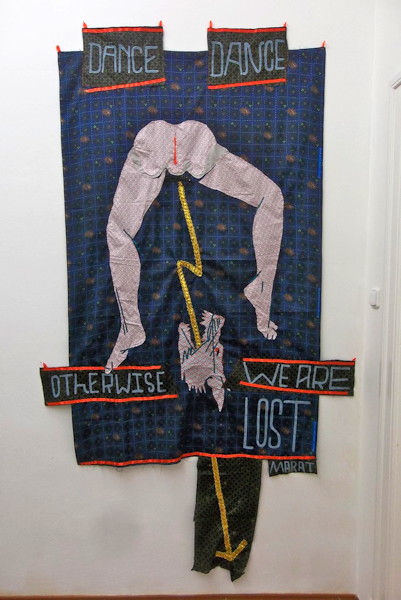