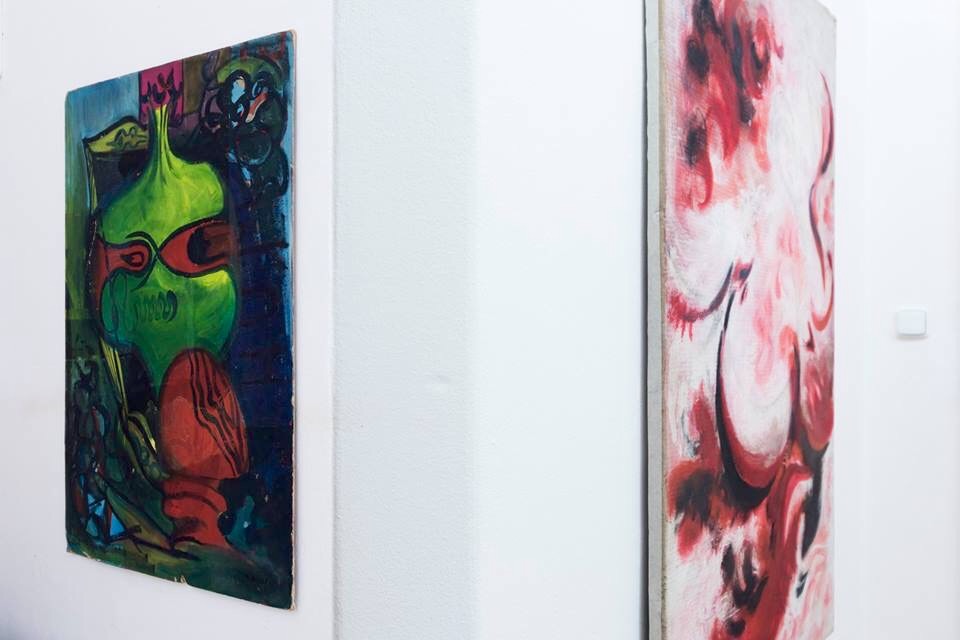 Orshi Drozdik (HU)
The work of Orshi Drozdik (1946, Hungary) has played a significant role in the history of women's art across the international arts scene and has greatly influenced a generation of artists to follow. Drozdik moved to Amsterdam in 1978, after graduating from the College of Fine Arts, in 1977 as a graphics major, and two years later she based herself in New York City. At present Drozdik works both in New York and Budapest, and is a professor at the Hungarian University of Fine Arts. She has exhibited at many of the foremost galleries across Hungary and abroad, and articles assessing her shows have been published in numerous prestigious art journals. Yet, Drozdik has continually engaged with the contemporary art scene in Hungary. The 1998 exhibition, article, and textbook titled Strolling Brains, for instance, greatly contributed to the spread of feminism in the country. Drozdik began her career in tandem with the Hungarian post-conceptual movement of the 1970s. As a harbinger she created her own theoretical and critical point of view, which was unique in the seventies cultural environment of Budapest. In the 80s, at the time of her emigration, building upon of her 70s working methode, she embraced poststructuralist critical discourse, that helped her to develop, the installation series, Adventure in Technos Dystopium, a theoretical and visual deconstruction of scientific representation. Therefore Drozdik's work can only truly be interpreted in the light of the poststructuralist discourse. Research, the demand for theory and its language, as well as the manifest representation of these in the work of art have been the ongoing driving force for her creative production. As a result, her chosen topic often unfolds in numerous variations and is presented in her polyvalent practice to reveal many aspects of the given problem.

Alva Hajn (CZ)
Born in 1938, right before the Second World War, Alva Hajn has just had a short period of time to make and show his art freely. During twenty years of normalization in Czechoslovakia he had very few opportunities to present his artworks in public, even though he has been intensively working on the paintings, objects and drawings. Based in the provincial town of Pardubice, Alva Hajn was considered as an unknown artist without some specific contacts or connections to other (more famous) Czech painters. However, between the fifties and the eighties he produced a considerable amount odd works, various in formats and rich in colours which stood out of the common image of “non-official art”. He ended his oeuvre in the 1980s by a number of objects and by a reduction of colours to black and white or even by their substitution for natural materials. He has passed away in 1991, several days before his great exhibition in Prague, which should have brought him a general recognition.

Július Koller (SK)
Seminal figure of the Slovak neo-avant-garde, born in 1939 in Piešťany, Slovakia, Július Koller developed his own conceptual tools to maintain a certain independence in Communist Czechoslovakia. The cultural scene was divided back then into institutional or official Socialist Realism, and non-official art. Throughout his entire career, he has always been examining the limits as well as the definitions of art. In his works, Koller mainly employed recycled or secondhand materials that responded to his idea of “anti-art”. Although he studied in a painting studio at the Academy of Fine Arts in Bratislava, his oeuvre mostly contains conceptual pieces as “Anti-Paintings” or “Anti-Happenings” as he used to call them. During the 1970s he has started his own project of “Universal-cultural Futurological Operations” or “U.F.O.”. In 1990 he founded the artistic group known as “New Seriousness” together with Milan Adamčiak and Peter Rónai. His work has been exhibited all over the Europe, including Slovak National Gallery (Bratislava, Slovakia), Van Abbemuseum (Eindhoven, Netherlands), Kunstraum (München, Germany), Centre Pompidou (Paris, France), and many others. He passed away in 2007 in Bratislava.

Zorka Ságlová (CZ)
One of the most quiet but also the most significant and distinctive artists of the Czech scene of the 20th century. Born in 1942 in Humpolec, Czechoslovakia, she studied in the studio of textile creation at the Academy of Fine Arts and Design in Prague what strongly influenced her work. In the 1960s she created mostly abstract geometric paintings and minimalistic objects. During the normalization of the 1970s she was prevented to sell or to present her art in public. That was the reason why she moved to open-air spaces where she organized landart happenings exclusively in the presence of her close friends. In this respect, she is deemed as one of the first artists who imported land-art movement in this region. In the late seventies Zorka Ságlová went back to textile production in the form of the Gobelins tapestries, often with a rabbit as the main character of her compositions. The latter represented a cultural symbol of vitality known in different countries. In the last period of her life she experimented with paintings and textiles as well as with action drawings with a real rabbit. After a long illness, she passed away in 2003. 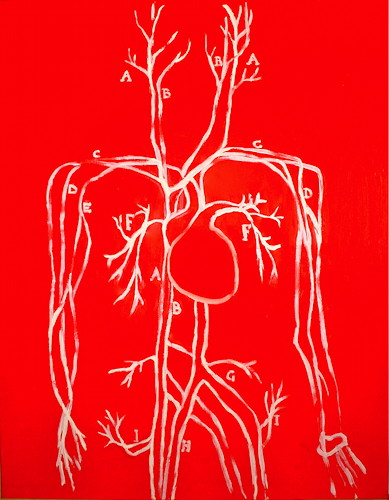 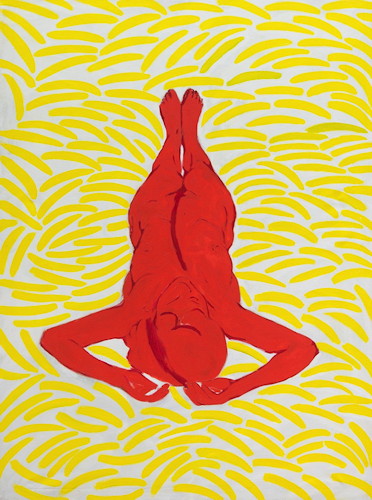 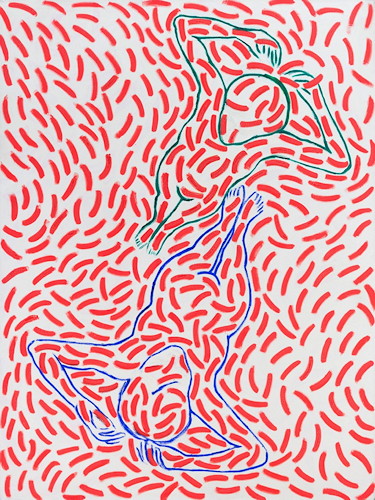 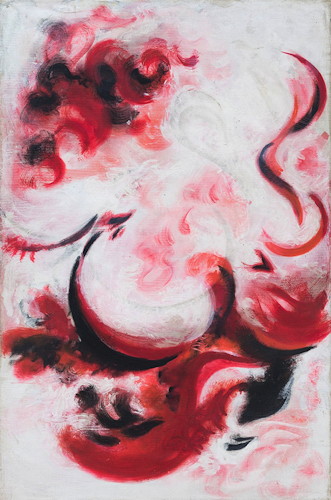 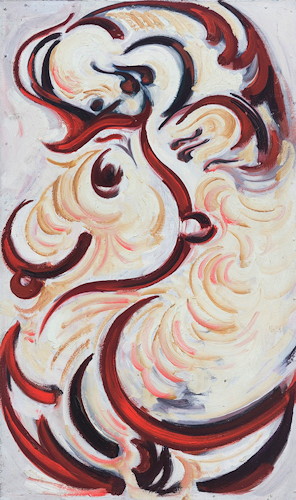 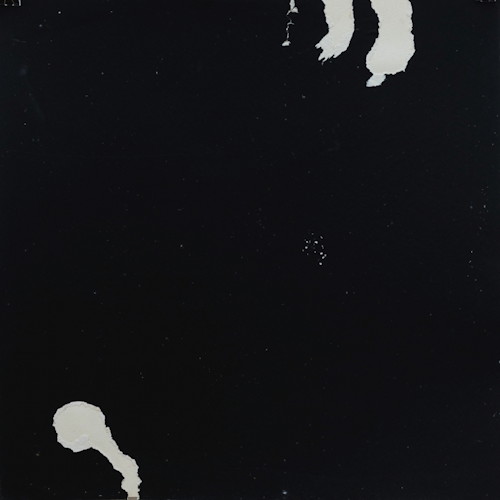 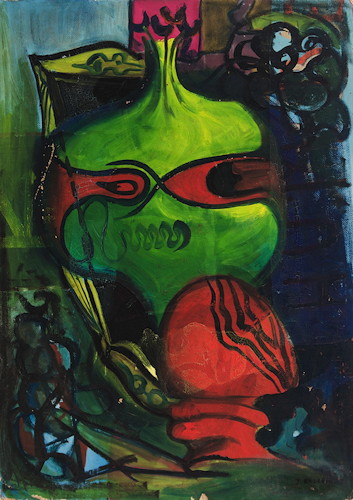 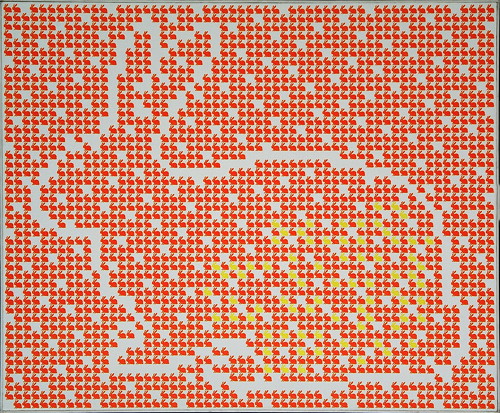 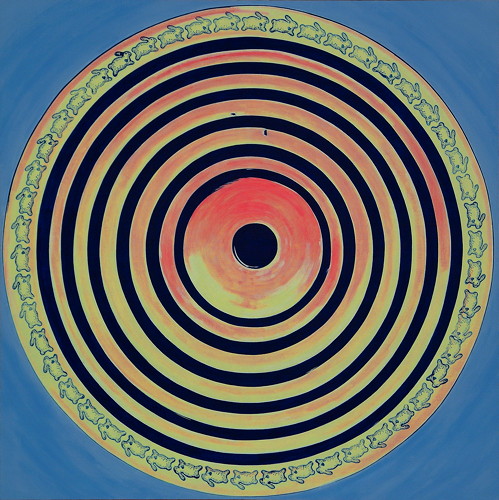 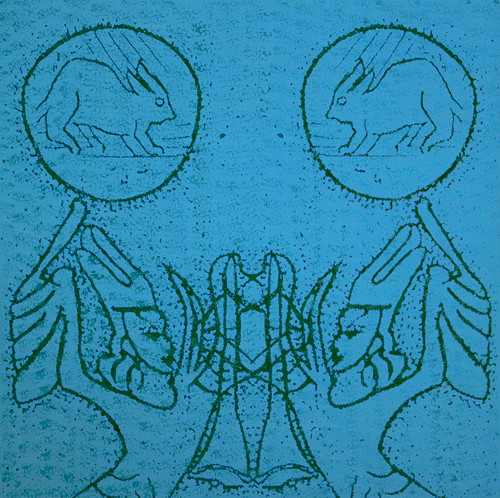 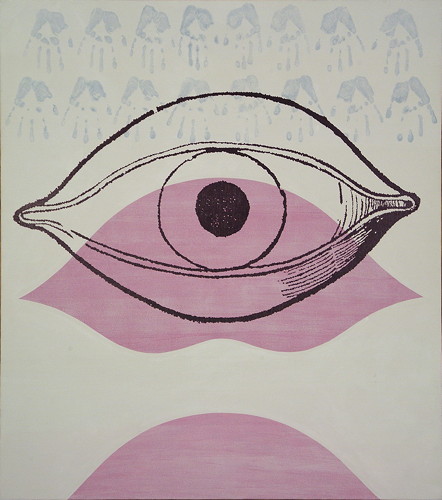 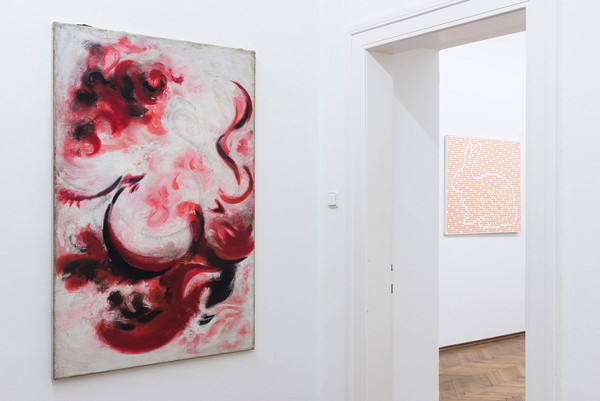 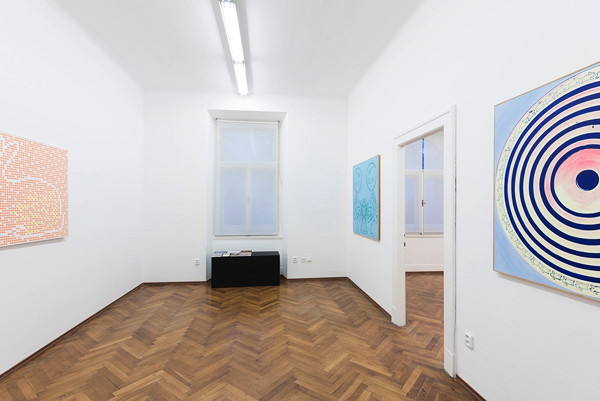 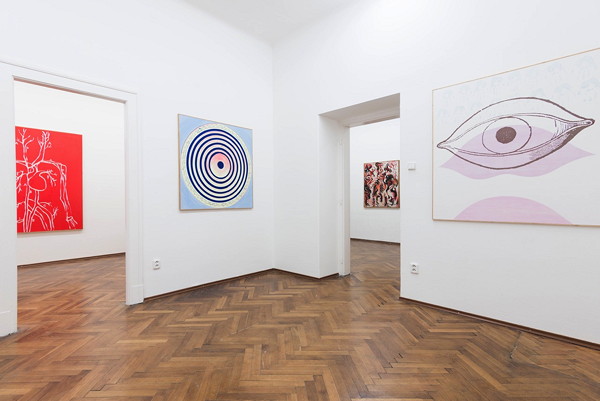 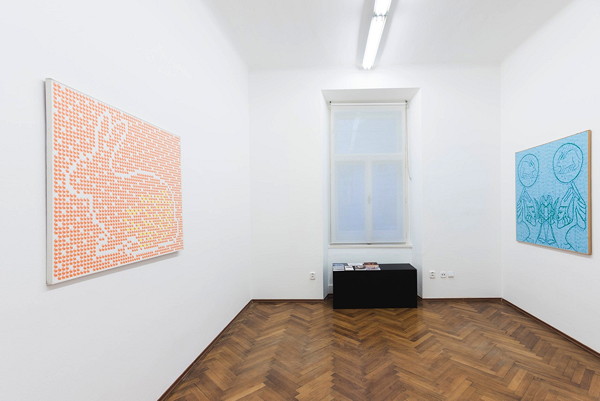 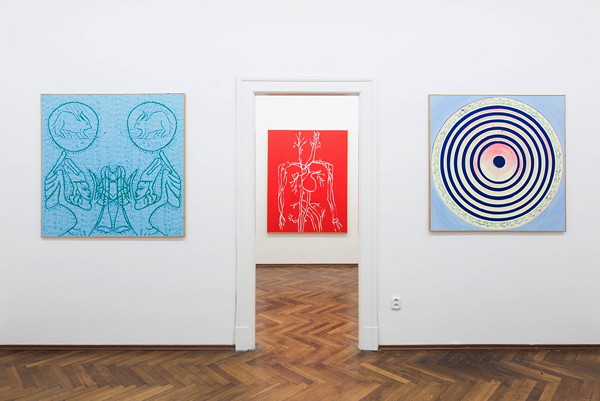 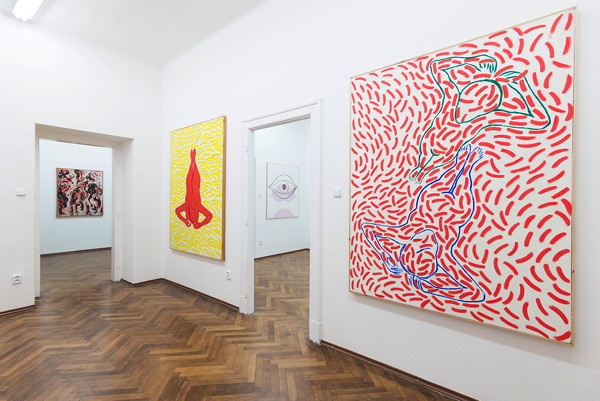 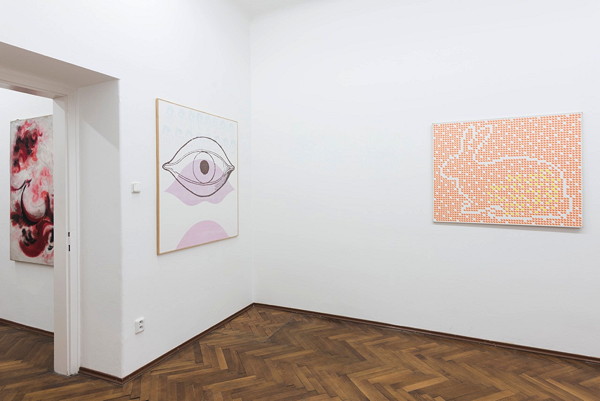 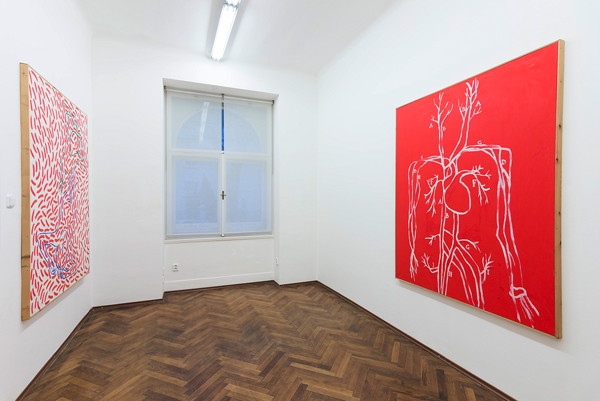 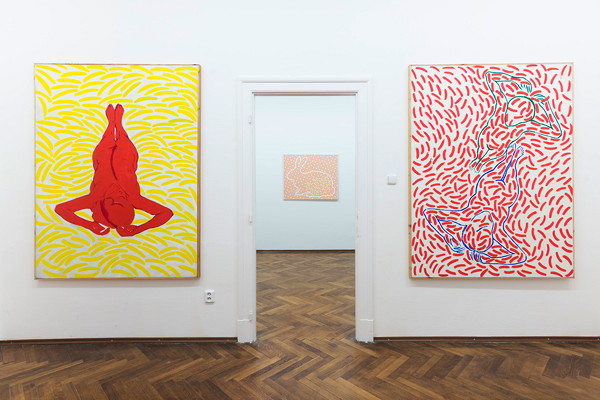 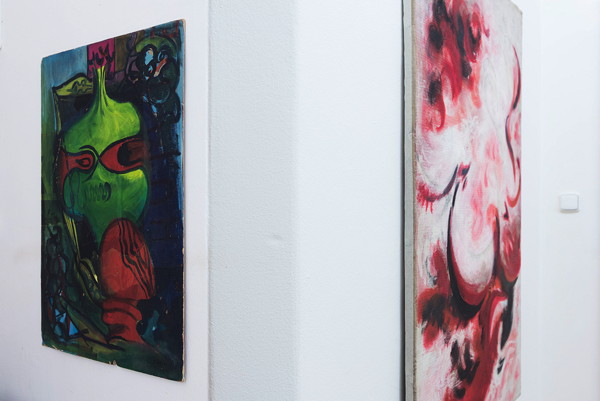 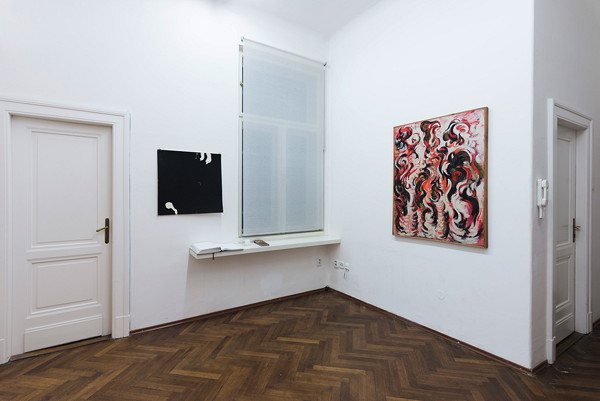 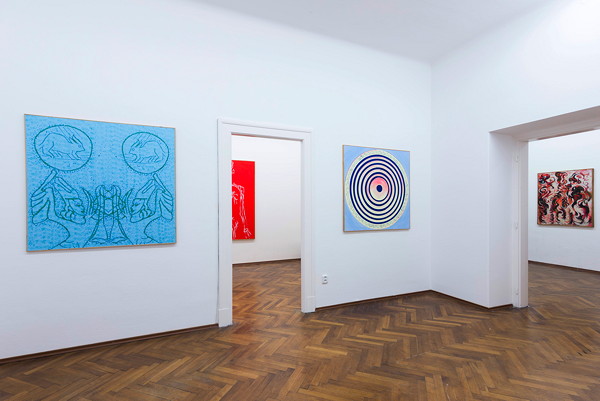