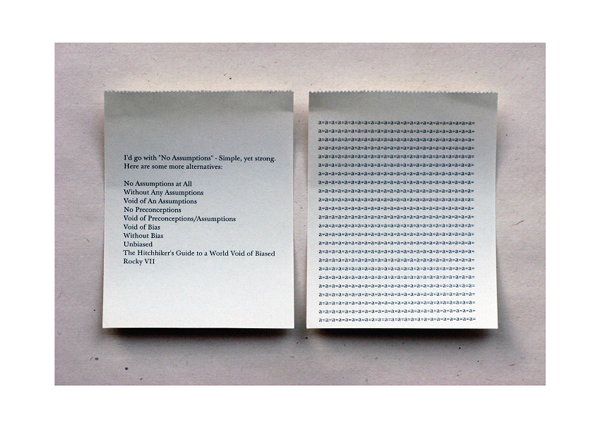 I've been working on this since autumn. I told myself that I'd only do the essential things and wouldn't fret the details - that I'd go straight for my objective. It wasn't going to easy, but then it shouldn't be. I wasn't going to construct any ontology; I'd just make it up as I went along, and it would just happen. I wasn't going to start with any assumptions that I'd have to abide by.

But I found out as I was working that everything I did had a tautological effect as if I were in a kind of strange loop. I had to keep starting over.
I then tried to keep from influencing it in any way, to just let it happen.
So I planned it, and it happened.

I could say that I’m not at all in interested in history. Yet all my work deals with history or, I should say, with the past. I use historical material to construct the past so that it speaks concurrently in the present, so that it is a living necessity. Why should we deal with the past? Because the threat of conformism is always at hand. We’re in constant danger; the state that we currently perceive as a state of emergency is no exception. It’s a continual state of emergency that will never end. As Walter Benjamin pointed out, a real state of emergency must be induced so that we can improve our position. My interest, therefore, lies in the present - which is why I can say that the past doesn't interest me. And yet, without evoking images of the past, without the construct of history, there is no present. The past is concealed in every present moment. Unless past images impressed upon the present are distinguished, every present moment is condemned to conformism. I could also say that conformism doesn't interest me. And yet all the work that I do is about conformism: It’s an internal struggle with conformism. The present confronts us with the doubts whether we are in fact facing the world from the best possible position. Only in confronting images of the past will we build a line of progress toward the future. If it is, indeed, still possible to believe in the future. But what other choice do we have? I'm always asking myself: Is what you do sufficiently autonomous and does it unconditionally capture the truth of the moment in relation to the surrounding reality. Am I not merely following given life patterns set in epistemological and socio-economical frames that I have embedded beneath my skin so that I can’t even notice what they’re like? This is always on my mind. I feel successful in doing this, except that failure is and has been present in this very idea from its inception. So, as always, I fail successfully.

I am, like pretty much all of us, a reader. Reading is not a passive activity for me; instead it’s a radical view of the world. For many years I pondered the hegemony of authorship. I’d always longed to be among the privileged who attribute meaning to words. Among those who determine and codify meaning. Instead, I just kept reading. At university they forced us to distil the meaning of words: to confirm a statement of the prior author through an exact citation, and thus also become an author. But there’s something perverted in this. It’s as if the privileged would allow others to have the same authorial privileges only if they confirmed the "indestructible" statute of prior authorships. I became an author based on this principle, but I did not feel fulfilled by it. Fulfilment still only came to me by reading. Then I understood why. I’m feel far freer when reading. All written texts are my endless reservoir that I’m reforming. I can change their meaning, switch it around, understand it, not understand it and connect it. I no longer see writers here as those who impose a literal meaning on me, but as entities that are on the same level as all others. They are part of all texts and hypertexts in the democratic field. This is how I read: I read ten to fifteen books at once. I read them in different rhythms; some I read in a day, some take me years. Then there are books from which I randomly read only a few sentences. I skip from book to book when reading. I employ a severe editing technique and stop reading in the middle of a sentence. I remember every word of some texts. But with other, fascinating texts that I become fully immersed in, I paradoxically can’t recall anything. Quite often it's the case that I don't understand some passages because they’re too complicated or else I understand them, but in a different way each time I read them. The library of texts that is formed in my mind is fragmentary and incomplete. It’s a kind of commonplace book, fully of excerpts and passages. I think this is probably a shared experience with all readers. I became a writer because the interpretation of the world that I'm presenting is subjectively autonomous and strictly in the same non-hierarchical relationship to other readers/authors freed from the hegemony of privileged authorship. All I'm saying is that there is no such thing as privileged authorship or, on the other end, passive reading. We’re all authors and we all have names. Just as Michel de Certeau wrote long ago: the reader doesn't have to be an easily manipulable consumer; that's just the view of the current epistemological order.

I work in a way that enables me to serenely say that I’m an independent individual that doesn’t control others and isn’t controlled by others. Let’s take a closer look at this. I'll describe here the context of my life: I’m a solidly situated member of the middle class. I have a decent education considering the place I come from; I travel a lot. I live in Central Europe where most people are convinced that they don’t have to contemplate things, since the order of things in which they exist cannot be changed. I’m almost forty and I’m beginning to realise that I understand things too slowly to be able to change my life according to my ideas. But that’s obviously a bourgeois alibi. I live my life with a deliberate purpose and my work is also deliberate. But, like everyone else I suppose, I have this constant feeling that something is running through my fingers. I’m an artist. This means that in the culture in which I live I’m considered a free-thinker, who lives his life without regard for financial matters. The artist’s work is seen as a mission. Unfortunately, it’s not like this. My work is part of the circulation of goods, thoughts and ideas of our socio-cultural-economic frame, just like everything else. I work in order to escape this mould, to show myself and others that nothing is unchangeable, that everything can ceaselessly be transformed and our own ideas can be imprinted in it. My entire anarchistic gesture is, however, absorbed by the whole system that I’m part of. It is increasingly difficult to begin again each day. But there’s nothing else to do. Emma Goldman dreamt of a situation in which society exists for people, and not vice-versa. She dreamt of a state in which human society is transformed. Its models and organization will no longer be imposed upon us. I feel very strongly that this dream must be further realised. There’s also the need to be a historical materialist, a radical reader and anarchist in actions even more that I've indicated here, even more than me – Mr. Bourgeois par excellence.

All for no reason

Can I ask you something?
Go ahead.
I already asked.
And I already responded.
What did you respond to?
To what you asked me.
Are you serious? Are you autistic or something?
No. I’m only attentive to what you asked. I merely try not to dodge the question, to be specific, and not to play any games.
Your answer seems like a game to me. You eliminated the context of the question, its tone, the other person. That’s no way to communicate.
Bullshit.
What’s your name?
They call me Three Dots, but that’s just a title, an imprecise term. Just a word. Don’t imagine anyone behind that.
So what should I imagine?
Nothing concrete.
So you’re not concrete. And what about you arm hair, nails, hair, teeth, flesh, muscles, bones, kidneys, heart, liver, skin, spleen, lungs, intestine, peritoneum, undigested food, digested remnants, bile, phlegm, blood, sweat, fat, pus, tears, skin oil, saliva, nasal secretions, synovial membrane, urine, excrement and brain? That’s not you either?
No, damn it. You mean to say that that list is me?
So what are you? A face? A figure, feelings, perception or consciousness?
You’re nuts.
So who are you?
Three Dots is just a sound that contains everything you named in it.
Well in that case call me Summary. You didn’t ask me my name – at least it will be easier. This Hellenistic dialogue will be on the truth.

Zbyněk Baladrán (born 1973 in Prague, Czechoslovakia) is an author, visual artist and curator. He studied art history at the Charles University Philosophical Faculty in Prague from 1992-1996, and from 1997-2003 at the Prague Academy of Fine Arts in the studio of visual communication. He is one of the co-founders and a curator of Galerie display, which was established in Prague in 2001, and in 2007 merged with tranzit.cz into tranzitdisplay, where he continues to oversee the exhibition program. He is also the co-curator, with Vít Havranek, of the project and exhibitions Monument to Transformation, a 3-year research project on social transformation that was presented in 2009 at the Prague City Gallery, and which traveled to several other locations in Europe later this year. Baladrán was also a part of the team of curators (tranzit.org) for Manifesta 8, Murcia, Spain in 2010. His artworks can be characterized as the search for links between the past and its construction in relation to the prevailing epistemological patterns. His works are represented in various international private and public collections. 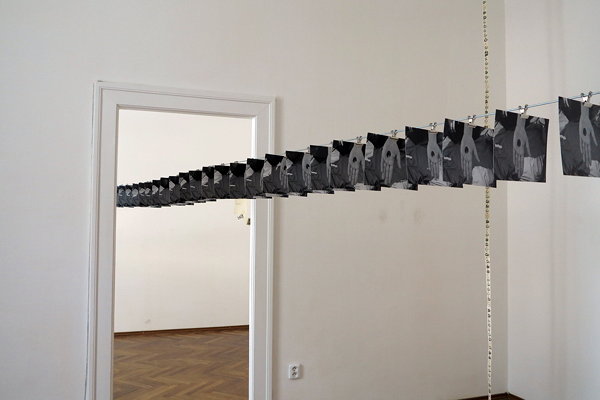 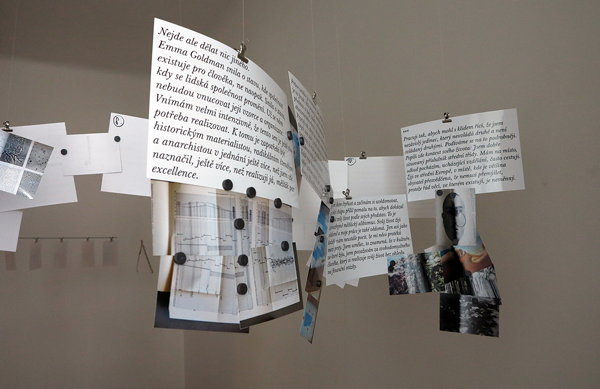 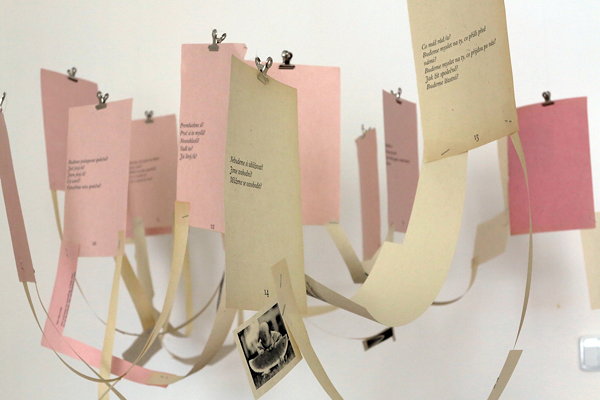 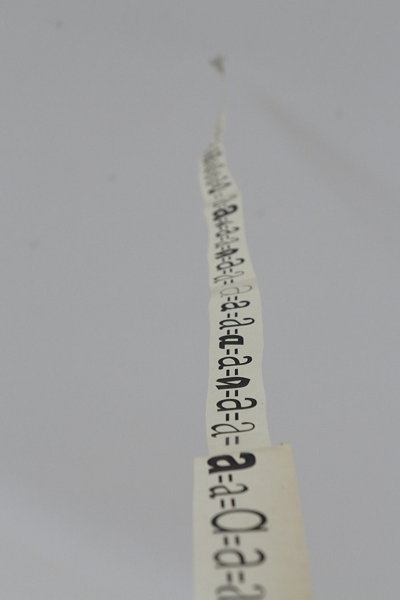 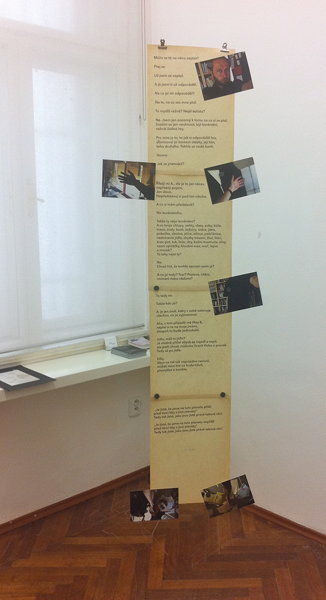 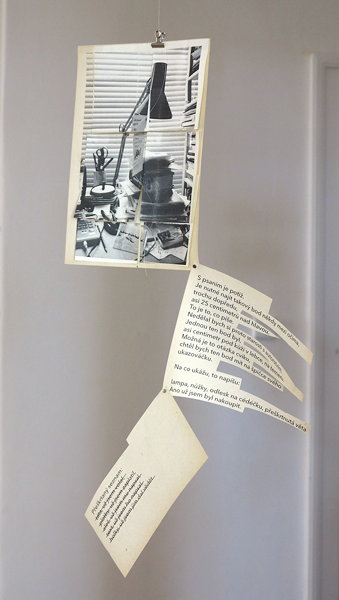 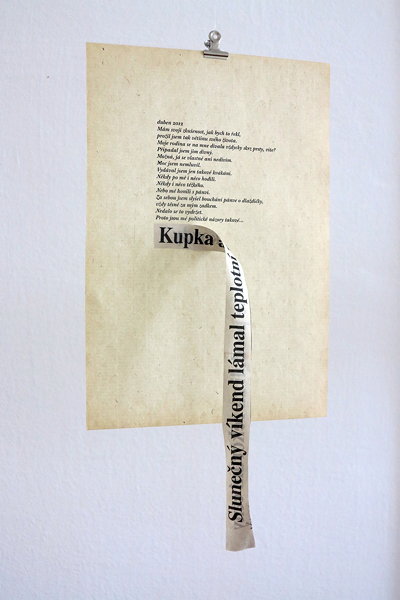 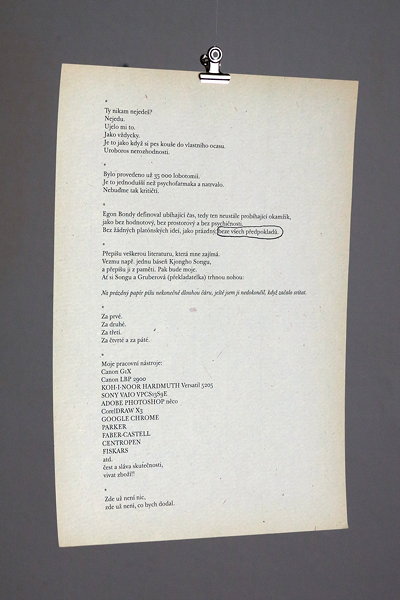 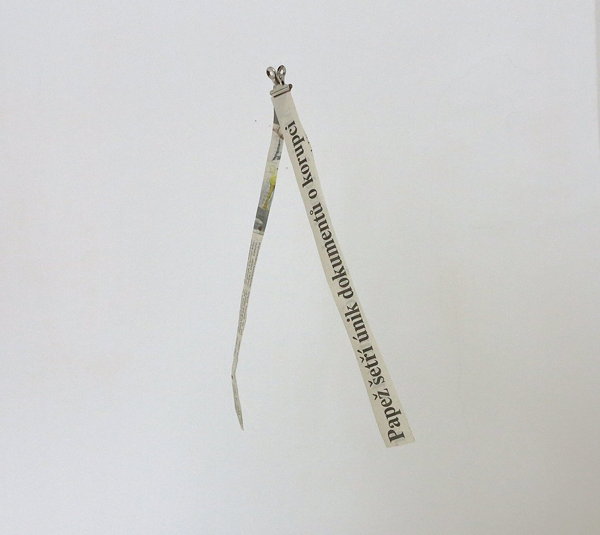 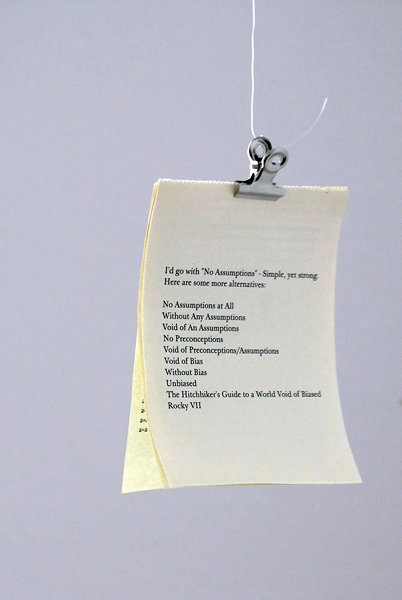 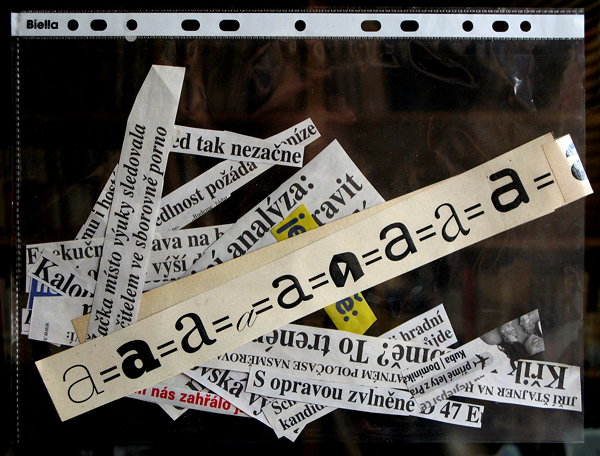 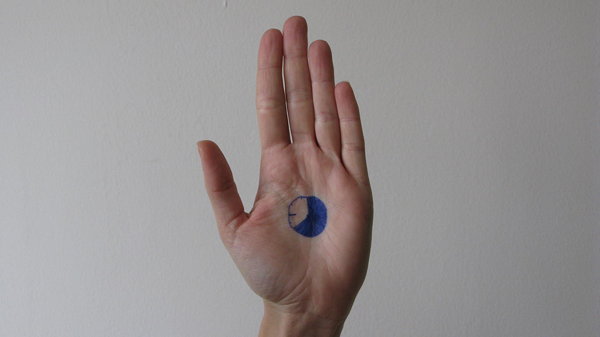 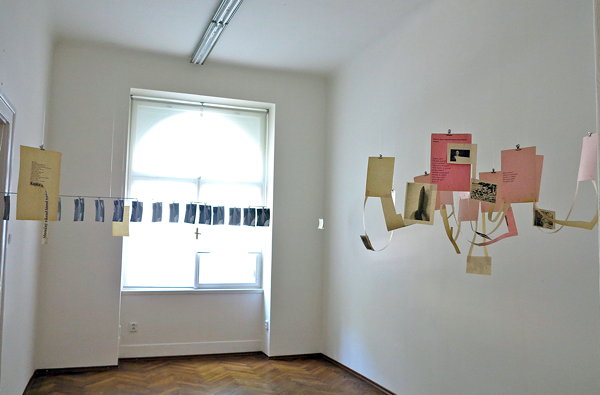 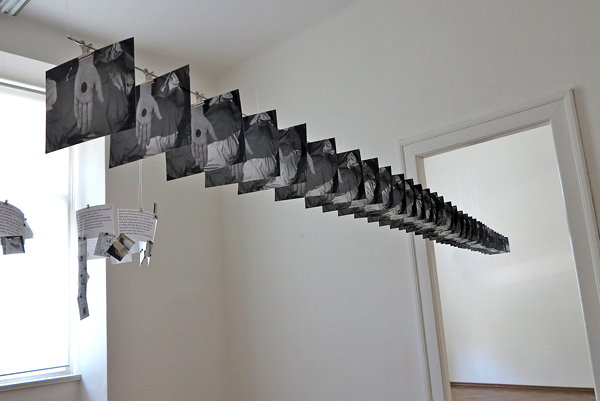 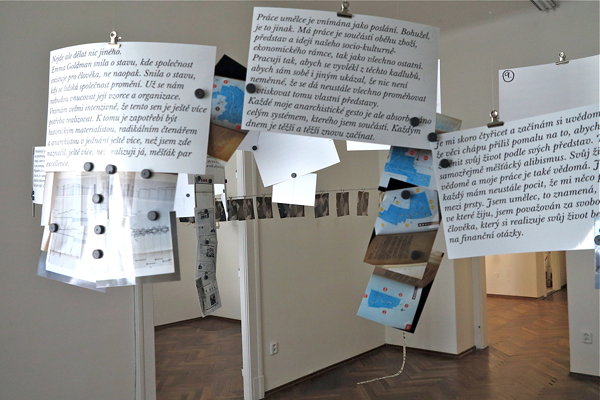