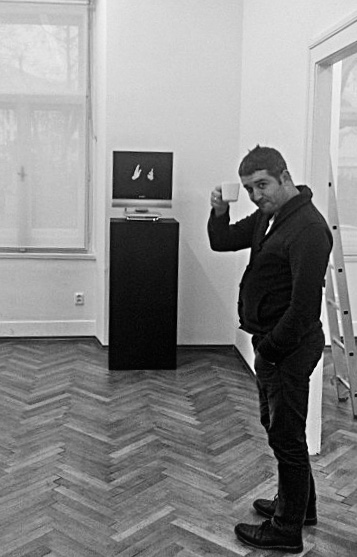 In his book Images in Spite of All philosopher Didi-Huberman wrote that in order to know, we must imagine for ourselves. So, what do we imagine when watching Ibro Hasanović's short film made in 2013? Are we watching an artistic film or a homemade video that was originally recorded on a VHS tape by Hasanović's father Hamdija back in November 1993? There is no written explanation about this piece, except a short notice by the artist that says: Video made out of the "VHS letter" that my father sent me during the war in Bosnia.
But when we start imagining, when we spend some time doing that (because imagining is work as Didi-Huberman reminds us), we realize that we are not only watching sequences of cheerful images of children playing in the snow in a small town in Bosnia, but that we are dealing with a specific archive of absences. These absences, these incomplete images refer to events that happened in real time and space; they are memories recorded for the absent Hasanović family, in order to preserve and understand the family history.

What Ibro Hasanović actually did in his work was reactivate the relationship between the poetical (children playing, people talking in the streets, the almost bucolic atmosphere of a snow-covered town) and the political (the harshness of war, not evident at first glance). It often happens in contemporary art that the political and the ideological overlap with the poetical, especially in the context of so-called tortured geographies. Obviously this is not the case in Hasanović's video. There are, however, some resemblances between this work and Godard's short piece Je Vous Salue, Sarajevo from 1993. In his film Godard speaks about culture as a rule and art as an exception, saying that everything speaks about the rule but nothing about the exception because art cannot be told, it can only be filmed, composed. or lived. Similarly, Hasanović uses a very personal document, his father's VHS recording, which he reorganizes in such a way (by changing the video format) that it becomes a place for imagination, for the creation of absent history. Not only for his family, but also for us, observers in a gallery space. What we really see in this film is "the art of the living".

Another element that is strongly present in the film is the element of play, or more precisely, images of children playing in the snow. What does play signify in such a context? For one thing these sequences echo Breughel's paintings depicting children's games in wintertime. The beauty of this resemblance lies in the fact that children always play, regardless of the circumstances, season, place, economic conditions, anything. Here we could mention another artist, Slaven Tolj, who made a piece consisting of two photographs of children playing in wartime Dubrovnik. The children in Tolj's photos, in the same way as the children in Hasanović's film, are completely unaware of what is going on around them, they are so absorbed in their activities that we actually feel what Agamben meant by "invasion of life by play". According to Agamben, the invasion in question is a change and acceleration of time. Play is not only about the present moment, it is about the destruction of calendar, when people free themselves from regular time and, in Hasanović's case, from the time of war atrocities and suffering. Observing children at play in a war-torn town could only mean one thing: what children are playing with are not merely toys but history as well. Play is historical, then, and this is something that already Heraclitus wrote: Time is a child playing a game of dice; the kingdom is in the hands of a child. But children alone cannot exorcise the phantoms of the past (war); what every society must do is get rid of those phantoms so that children can live and one day take the adults' place. And this, it seems, is the subtle message of Hasanović's film.

Bojana Piškur, born in Ljubljana, Slovenia. She graduated in art history from the University of Ljubljana and received her Ph.D. at the Institute for Art History at the Charles University in Prague, the Czech Republic. She works as a curator (senior curator) in the Moderna galerija / Museum of Modern Art in Ljubljana. Her main theme of research is experimental art contexts/concepts/forms/relations in wider social environment. Member of Radical Education Collective.

In art historical terms a study represents the most common process for an artist when creating complex artworks such as allegorical or historical paintings. While highly idealised and mythologised, historical paintings have always been based on actual events that had to be commemorated for political and ideological reasons. Aware of its historical context, Ibro Hasanović commemorates the eighteenth anniversary of the infamous signing of the Dayton Accords, an event that took place in the Élysée Palace in Paris on 14 December 1995 and has been widely recognised as the agreement that ended the bloodshed of Yugoslav wars, particularly the war in Bosnia and Herzegovina. In Study for the Applause, a series of nine photographs and one video, Hasanović re-enacts a scene from a Gérard Julien photograph showing three representatives1 of the conficting parties along with their patrons, the presidents of the world´s superpowers2, who initiated the peace talks and assisted with the adoption of the agreement.

Before the emergence of photography the factuality of historical paintings was not of signifcant importance: such are Diego Velásquez's Te Surrender of Breda (1635) where the Dutch commander hands over the keys of the besieged town to the Spanish opponent or Jacques-Louis David's Napoleon at the San Bernardino Pass (1800) where the new French emperor, mounted on a white horse, leads his army into Italy. Te fact that the painters themselves might not have witnessed the actual event depicted was not problematic because the final picture was always highly idealised. Historical paintings are therefore acts of political will, in order to perpetuate a particular discourse in collective memory and, consequently, history. Te American neo-classicist painter Benjamin West’s attempt to depict the signing the Peace Treaty of Paris (1784), which ended the independence war in the USA, documents delicate nature of the task of depicting such subjects. Tis painting of great significance remained unfinished because diplomats representing the British Empire at the time refused to pose for the historical painting commemorating their defeat.

The need to commemorate significant events by recording them – as a painting, photograph, or flm - derives from the idea that visual representation serves as proof that the event really happened in the way in which it is depicted. Over the past 170 years, as a result of the availability of reproductive media that superseded and eventually succeeded the complete imaginary idealisation of allegorical and historical painting, certain protocols for portraying politically significant events have been developed. However, several diplomatic conventions were adopted for significant occasions such as official political meetings, negotiations and signing agreements. This can be seen in the images from Compiègne depicting the signing of armistice between France and Germany in 1918 and later in 1940 when the Third Reich managed to locate the same train carriage in which German surrender in WWI was publicly declared in order to pose in front of it again as a symbolic gesture of revenge. Trough enacting a set of diplomatic protocols, the uniformed military officials and state representatives aim to convince the audience that their decisions are correct and righteous.

Capturing decisive moments of politically significant events in a distinctive and controlled way requires a fair amount of staging. Te images of conferences, talks, meetings, or signing ceremonies have the immediate intention of becoming iconic or at the very least definitive depictions of the event, and therefore have to convey a very clear message. Likewise, the images of Dayton Accords signing ceremony in Paris have the intention to convince the audience, the consumers of the photograph and footage, that the agreement was the best and the only option in the given situation. Te agreement indeed brought peace to the war-torn areas of Bosnia and Herzegovina after almost four years; however, 1 Serbian President Slobodan Milosević, Croatian President Franjo Tu©¢man and Bosnian President Alija Izetbegović 2 Spanish Prime Minister Felipe Gonzales, US President Bill Clinton, French President Jacques Chirac, German Chancellor Helmut Kohl, British Prime Minister John Major and Russian Premier Victor Chernomyrdin it has also caused formal ethnic division of the state and brought on additional mass migrations that have been already caused by war. Te Dayton Agreement actually proved that the war was fought in vain for all sides involved in the conflict. From today's perspective one could conclude that the war in Yugoslavia was mostly dependant on political decisions of its warlords who managed to persuade their loyal followers to voluntarily participate in a marginal episode of global geopolitical changes.

Hasanović's video and photographs show clapping hands in an empty space recreating the applause of every particular participant as a metaphor for visual image's potential to idealise and manipulate broader picture. He, himself collateral damage who spent the war as a refugee, is seeking to review and question the aftermath of the agreement that, as a side effect, created an invalid and dysfunctional Bosnian state.
Te protocol of the Dayton Accords signing ceremony followed by a solemn applause and a patronizing speech of US president Bill Clinton addressing the chieftains of the warring sides, stripped of protocols and embellished rhetoric, demonstrates the banality of the bargain for territory. Te applause too was aimed at the chieftains, in order to commend them for accepting the terms set by influential states: the incorporation of democracy and free market economy as unquestionable values. Te Study for the Applause ironically points out the paradoxical outcome of armed confict in Bosnia and Herzegovina, which could be seen as a blueprint for a number of recent wars taking place around the globe caused and triggered by economic interests.

Miha Colner (1978) is an art historian working in different felds of contemporary art as an independent curator, writer and editor. Since 2006 he has been a curator and programme coordinator at Ljubljana based Photon – Centre for Contemporary Photography as well as freelance contributor for number of publications, newspapers and magazines. He lives and works in Ljubljana and London.

Ibro Hasanović (Bosnian, b. 1981) lives and works in Pristina. He studied at the Academy of Fine Arts in Sarajevo and at Le Fresnoy - Studio national des arts contemporains in France. The central themes of his works - films, videos, photographs and installations are individual and collective memories. 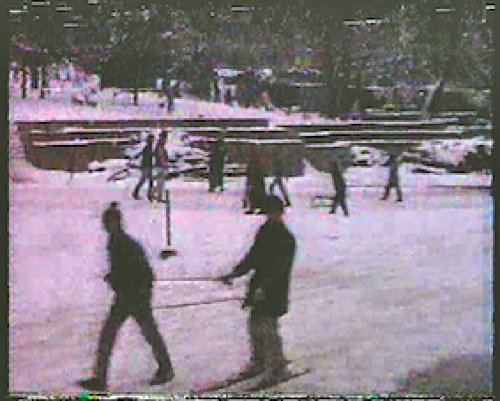 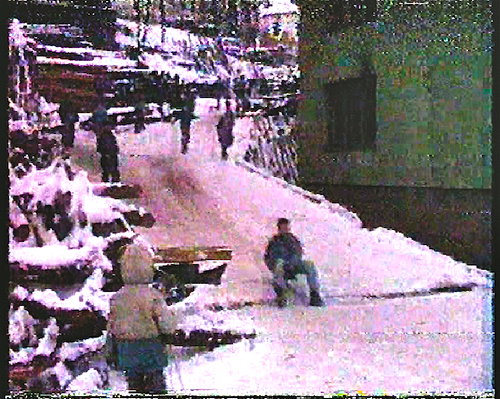 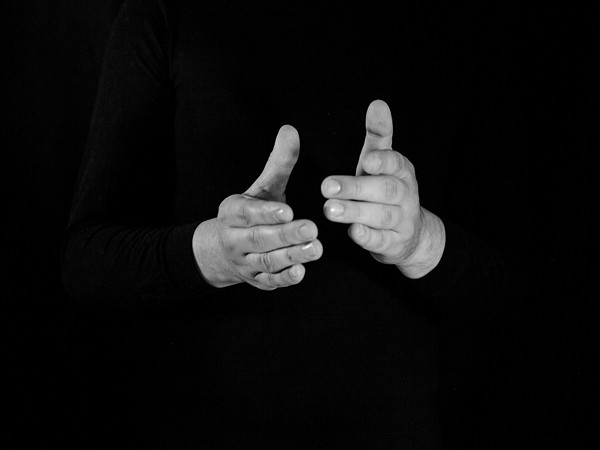 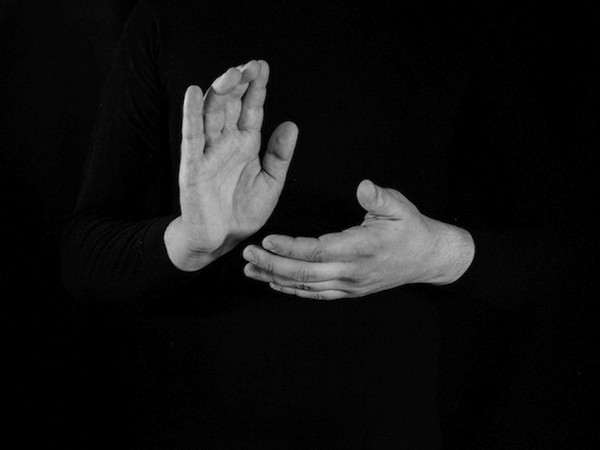 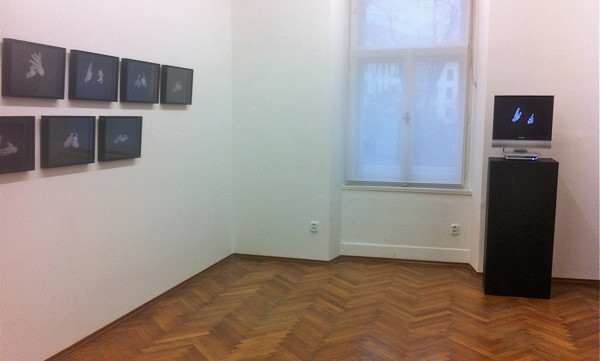 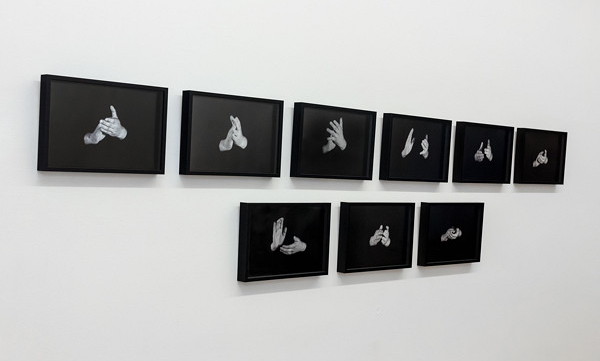